Due to Threat of Detention for Human Rights Abuses

Santiago, Chile - While the annual UN Climate Summit (COP25) commences in Madrid, protesters across Chile, the country in which the COP was originally planned, are demanding that Chile be stripped of the Presidency of COP 25 due to the human rights abuses happening in Chile. At the same time, Spanish Judge Baltasar Garzón has threatened to have Chile’s President Piñera detained if he attempts to enter the country. 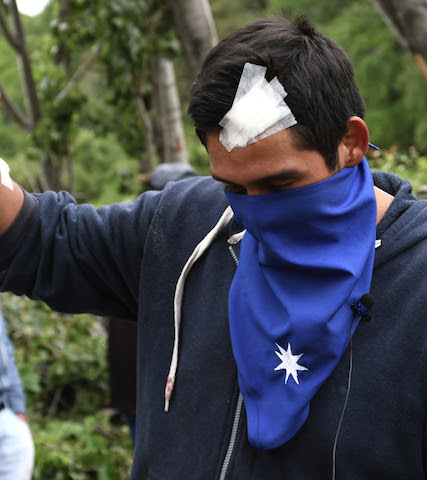 Protesters are rising up against Chile’s neoliberal model, imposed under the Pinochet dictatorship. More than two dozen people have been killed in the protests and hundreds have lost eyes as Carabineros de Chile (national police) intentionally shoot metal-filled rubber bullets shotgun-style at people’s heads.

Chilean and Indigenous Mapuche protesters explain that they are not seeking simple reforms. “We are not marching for social reforms,” said Mapuche elder Ana Llao, “we are marching for a total change of the system!”

Mapuches point out that political repression has been going on against them for decades, and escalated under the Pinochet regime, when vast expanses of their territory were stolen and turned into industrial monocultures of non-native pine and eucalyptus for pulp and paper companies.

Mapuche communities have long resisted this land theft, with Mapuches being attacked, murdered or jailed as recently as 2018. In November 2018, an unarmed Camilo Catrillanca was shot in the back of the head and killed by Carabineros. In April 2018, Mapuche Lonko (leader) Alberto Curamil was arrested on trumped up charges after years of fighting deforestation and successfully stopping two hydro-electric dams. In 2019 he was awarded the coveted Goldman Environmental Prize. As the COP begins, Lonko Curamil’s trial continues in Temuco, Chile. 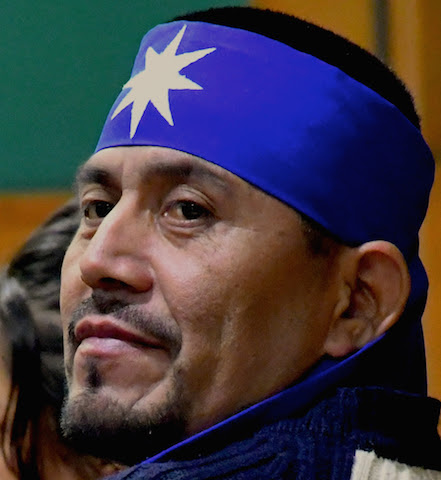 “There is a political problem of permanent violence executed by the state regarding Mapuche people here in Wallmapu. The Chilean state has repressed, shot people in the back, and imprisoned them permanently. We live under a model of dispossession and exploitation–of misery–that has not only attacked Mapuche people but all Chileans,” said Rodrigo Román, attorney for Lonko Curamil.

With the momentum of the national uprising, two weeks ago, two Mapuche communities near Curacautin, Liempi Colipi and Quilape Lopez began an occupation of 1500 hectares of ancestral lands. They have been attacked by the police twice, with some members injured and others hospitalized. Referring to a series of hydroelectric projects planned for rivers throughout Mapuche territory, including the sacred Rio Cautin, Juan Ramón said, “Chile has now moved on from stealing our land to stealing our water.”

Alejandra Parra of Environmental Rights Action Network (RADA) points out, “Chile provides a warning to the world. Our environment and people are already being devastated by these neoliberal ‘climate solutions’ being lifted up by the Chilean Presidency at COP25. From hydroelectricity that steals our rivers, to electric cars, solar panels and industrial wind farms that ravage our mountains and deserts for lithium and copper, to the expansion of tree plantations onto Indigenous lands for the ‘bioeconomy’–Chile shows why ‘climate action’ cannot be motivated by profits.”

The neoliberal model has long been a feature of the climate COPs in the form of REDD, carbon offsets and other carbon market schemes, but this year under Chile’s leadership, it is rising to new prominence in the form of “Natural Climate Solutions.” These so-called solutions have been condemned as the commodification of the Earth for the purpose of creating vast quantities of carbon and biodiversity offsets designed to enable climate-destroying business as usual under the pretense of climate action.


What differentiates Global Justice Ecology Project from most groups is our holistic approach to organizing.  We believe that the compartmentalization of issues is enabling corporations and conservative forces to keep movements for change divided and powerless.  We strive to identify and address the common roots to the issues of social injustice, ecological destruction and economic domination as a means to achieve a fundamental transformation toward a society based on egalitarian ideals and grounded in ecology.

Richard Eskow
The War on Logic: Contradictions and Absurdities in the House’s Military Spending Bill
END_OF_DOCUMENT_TOKEN_TO_BE_REPLACED

John Prine As Tender Poet: The Best That I Could Do

Months after the grievous loss of John Prine - songwriter's songwriter, good ole boy of wit and grace, beloved best friend to glad thousands he'd never met - his home state of Illinois has named him their first Honorary Poet Laureate. It's another bittersweet twist in a bitter year: His last song, "I Remember Everything," also just became his first Billboard #1 hit. The song is pure Prine, as lustrous and clear as the waters of Lake Marie. Sweet revenge for a Handsome Johnny, much missed.
Read More...
END_OF_DOCUMENT_TOKEN_TO_BE_REPLACED