Detroit, MI - On Wednesday, Abdul for Michigan released a new digital advertisement, called “Language of the Impossible”. The advertisement, shot in Detroit, Flint, and Grand Rapids, depicts the energy and enthusiasm behind the campaign in recent weeks. The ad features footage from Abdul's weekend rally tour with Alexandria Ocasio-Cortez. “Language of the Impossible” was directed by award-winning progressive media strategist and filmmaker Frank Chi. 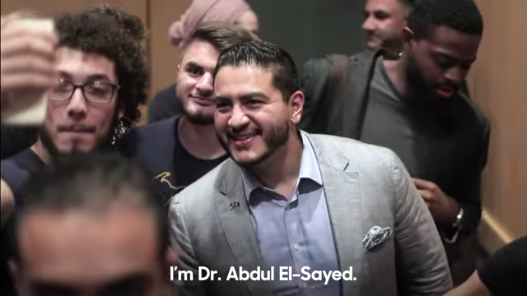 Ad Script: “If you're like me, you've heard the language of the impossible. It's not just said in words. We hear it loudest in the deeds and neglect from politicians and corporations who have power. The language of the impossible is when they tell us there's nothing we can do when the water poisons our babies. That we can't complain when we're barely living paycheck to paycheck, or when we can't see a doctor. That we'll never stop Betsy DeVos from profiting off our public schools. That language of the impossible – it's there when they say to us you're too young, too brown, too black, too foreign, too female, too muslim, to lead. They've tried to dominate us with it our whole lives. But on August 7th, we quiet them. We show them what is possible. I'm Dr. Abdul El-Sayed. I went to medical school to learn how to heal – then, I realized it's our politics that made people sick in the first place. When we the people decide that we are willing to stand up for a politics that is true to our ideals. When we join voices, when we raise and lift each other, when we do the work of democracy, clean water for everyone is possible. Good healthcare for all is possible. The ability to send your kid to a school that dignifies their brain is possible. These are not just possible. We will make them our future in the state of Michigan.”

Dr. Abdul El-Sayed is running for governor to make state government work for all Michiganders, not just the privileged few. Abdul is a Rhodes scholar, physician and public health expert who, as Detroit’s health commissioner, launched a program to ensure every child who needed one got a free pair of glasses. Abdul is running on a platform of bold, progressive ideas to address gaping inequality between the rich and poor, including raising the minimum wage to $15 an hour, passing Medicare for All to guarantee health care as a right, and making college tuition- and debt-free for families earning less than $150,000 a year.

Was the Fed Just Nationalized?

Why 'Waging War' on Coronavirus Is a Dangerous Metaphor

Adolph Reed Jr.
Disparity Ideology, Coronavirus. and the Danger of the Return of Racial Medicine

Rick Claypool
Even During a Pandemic, Plutocrats Prioritize Profits Over People
END_OF_DOCUMENT_TOKEN_TO_BE_REPLACED

In a time when "a true patriot gets fired for doing the right thing," a Navy captain ousted for blowing the whistle on Navy inaction as coronavirus ravaged his crew walked off his ship to the stirring sound of thousands of sailors chanting, "Cap-tain Cro-zier!" Facing 1,000 cases, Capt. Brett Crozier "was wrongfully relieved of command but did right by the sailors" when he warned the outbreak could kill sailors "entrusted to our care.” His leadership, said one, made him "the man for the people.”
Read More...
END_OF_DOCUMENT_TOKEN_TO_BE_REPLACED