For breaking news and comment on EU affairs: www.twitter.com/GreenpeaceEU

Brussels - Under pressure to take part in a climate summit hosted by US president Joe Biden on Thursday with a wrapped up climate law, the EU has agreed an emissions reduction target for 2030 that falls well short of what science requires to stop catastrophic climate breakdown.

After all night talks, the deal reached by governments and the European Parliament in Brussels to roughly halve emissions by 2030 will not be sufficient to restrict global heating to the relatively safe threshold of 1.5°C, which is supported by the Paris climate agreement. 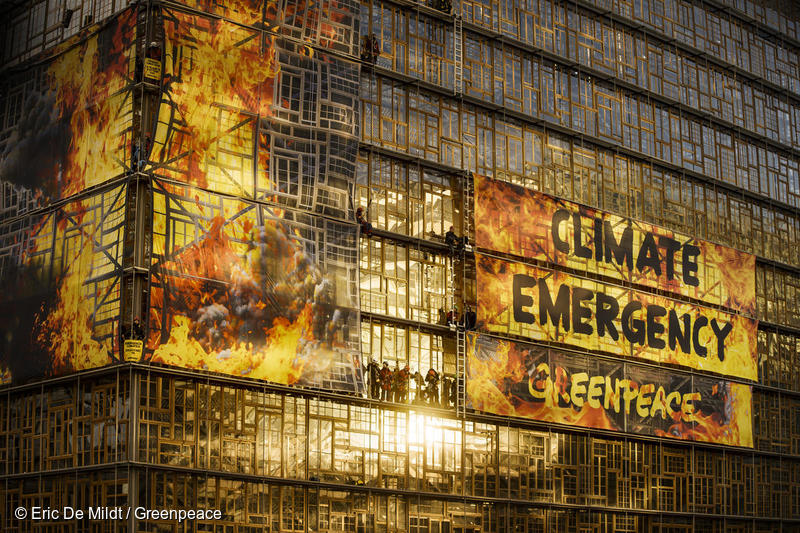 Greenpeace EU climate campaigner Silvia Pastorelli said: “The EU is more worried about having something to brag about at Biden’s climate summit than it is about what it means for the climate emergency. This deal shows that Europe’s climate action is all smoke and mirrors. Politicians copying the language of climate marchers are in fact concealing accounting tricks concocted by oil and gas lobbyists. This isn’t much better than business as usual, saddling younger generations with the devastating consequences.”

The 55% net-emissions target translates to a 52.8% in real emission cuts in polluting sectors, like energy, transport and farming, because of the accounting of emissions that could potentially be absorbed by carbon sinks like forests. The Commission said it wants to increase the contribution of carbon sinks, but this promise is not enshrined in the new law and it is as yet unclear how feasible it would be, given how vulnerable forests are to the effects of climate breakdown. Based on existing climate measures and targets, the European Commission already expects the EU to reduce emissions by 46% in 2030.

The climate law enshrines the EU’s 2050 climate neutrality target, but it remains a Union-wide target, not for individual countries.

The agreement also mostly skirts the issue of fossil fuel subsidies, ignoring the EU’s commitment to phase them out by 2025, only referring to the Commission’s intention to come back to the issue later.

The new climate law does include provisions for an independent climate advisory body, the European Scientific Advisory Board, made up of 15 members with a four-year mandate, which would provide scientific advice and scrutinise EU climate policies to check their alignment with EU targets and objectives.

The provisional agreement also establishes an EU greenhouse gas budget for the period of 2030 to 2050. While this will inform a 2040 climate target, it does not address the current decade, which scientists warn is where the struggle against extreme climate breakdown will be won or lost.

Earlier this week, the UK announced a 78% emissions reduction target by 2035, including international aviation and shipping emissions.


Independent campaigning organization that uses non-violent, creative confrontation to expose global environmental problems, and to force solutions that are essential to a green and peaceful future.

The world turns away, but "there is fuel in the air" as a record number of Palestinians in and around Jerusalem lose their homes, either pitilessly razed by bulldozers or seized by jeering Israeli settlers with the "law" of occupation on their side. For those left destitute, it's "an early death," a brutal uprooting by a country that "throws us out like garbage" when they ask only to live: "I need them to let me live, with my family, in my house. It's a simple request."
Read More...
END_OF_DOCUMENT_TOKEN_TO_BE_REPLACED