McGovern responds: “I’m committed to the Select Committee on a Green New Deal.”

Hoyer delays: “I appreciate their passion.”

As the 2018 Congressional session wraps up, young people take action at Pelosi, McGovern, Hoyer offices demanding Select Committee on a Green New Deal to be 2019 priority, McGovern and Hoyer respond.

WASHINGTON - Today, over 1,000 youth with Sunrise lobbied 50 Congressional offices and sat-in at the offices of Reps. Pelosi, Hoyer, and McGovern, demanding Democrats and their leaders in the House support the Select Committee for a Green New Deal before the holiday recess. In total, 143 were arrested.

“The UN says we have 12 years to transform our economy and avert catastrophe,” said Varshini Prakash, Sunrise co-founder, as the sit-in began at Rep. Pelosi’s office. “Over 1,000 young people took over Capitol Hill today because we all deserve good jobs and a livable future. The Democrats need a plan to make it happen.”

The Green New Deal is a comprehensive plan to transform the U.S economy off fossil fuels in the next decade by eliminating warming emissions from all major industries and creating millions of green jobs in the process.

Democratic Whip Rep. Steny Hoyer responded to the sit-in via Twitter, saying “I'm happy to hear from them about one of the most pressing issues of our time. Speaking out is exactly what our democracy is all about, and I appreciate their passion.”

n response, Sunrise spokesperson Varshini Prakash said “We need you to do more than listen. We need you to take the #NoFossilFuelMoney pledge and support the proposed Select Committee on a Green New Deal by the end of the year. We’re doing our job, will you do yours?”

During his 20-year career in Congress, Rep. Hoyer has received over $250,000 from fossil fuel executives, lobbyists, and PACs.

Rep. Jim McGovern greeted the young protesters in-person, accepting the demands and pledging that he is committed to the Select Committee on a #GreenNewDeal. “The reason we're talking about it is because you're here,” he said amidst the protesters, congratulating the growing movement for putting the Green New Deal on the national agenda. Rep. McGovern later reaffirmed his commitment on Twitter.

As Congress prepares to head home at the end of this week for winter recess, Sunrise and the growing movement for a Green New Deal has kept the pressure on, demanding the Select Committee move forward so work on the Green New Deal can begin promptly in the 2019 legislative session.

“Any politician who wants to be taken seriously by our generation needs to support solutions that match the scale and urgency of the climate crisis,” said Prakash. “If the Democrats want the youth vote in 2020, they need to get to work on a Green New Deal in 2019.” 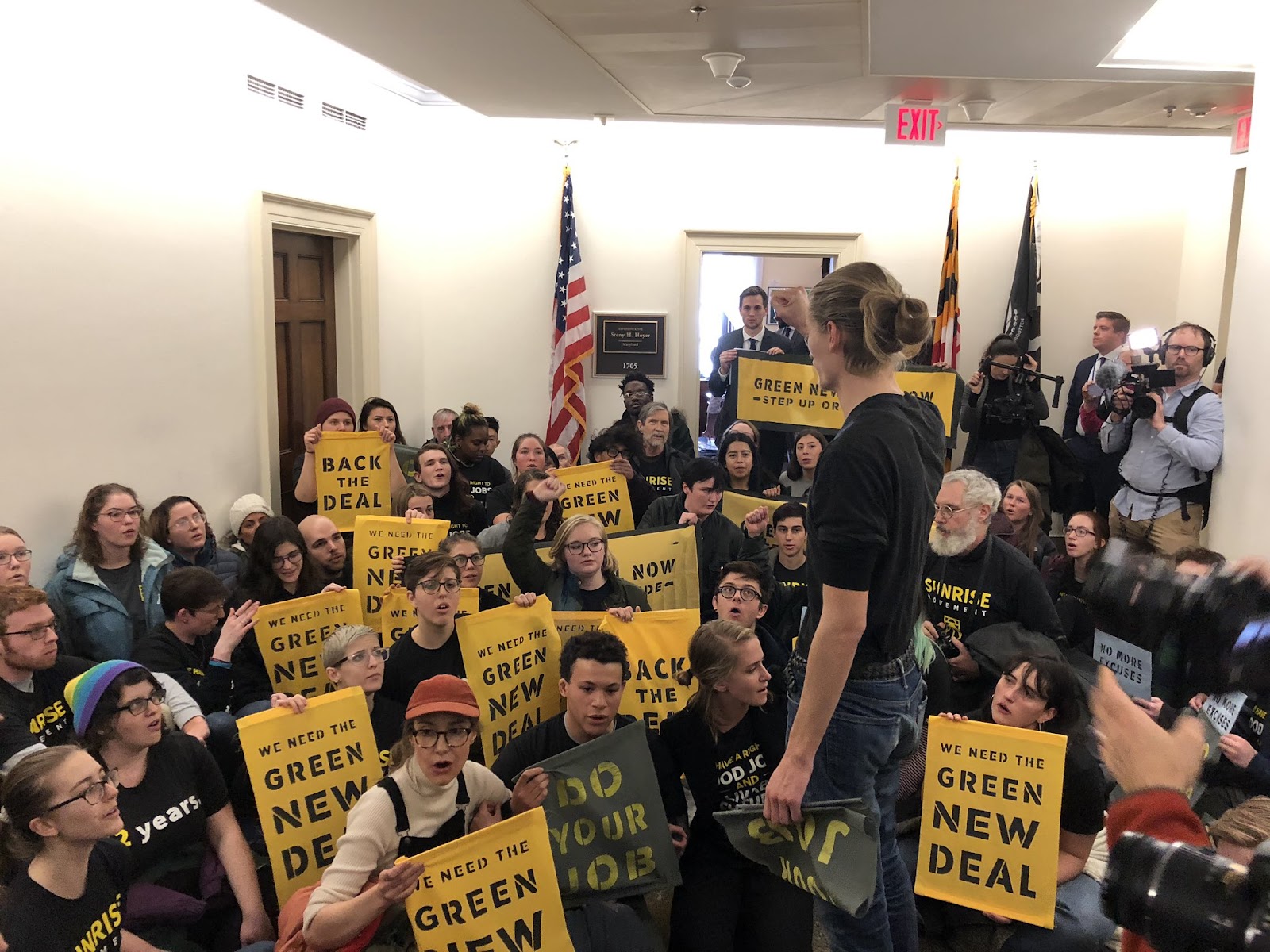 
Sunrise Movement is a movement to stop climate change and create millions of good jobs in the process.

The Irony of the Centrist-Progressive Debate

'There Needs to Be Accountability,' Says Ocasio-Cortez as Documents Show DNC Involvement With Iowa Caucus App

END_OF_DOCUMENT_TOKEN_TO_BE_REPLACED

In what was a good day for rich male felon low-lifes and a "legal dumpster fire" for anyone with a lingering belief in justice, the Mobster-In-Chief offered clemency to a bunch of white-collar criminals, possibly in a test run for letting off Roger Stone, Manafort, Flynn etc. Most egregiously, Trump freed R od Blagojevich, who famously tried both to sell Obama's Senate seat and extort a children's hospital for campaign money, because "he seems like a very nice person." Up next: Hannibal Lector.
Read More...
END_OF_DOCUMENT_TOKEN_TO_BE_REPLACED