ATF Releases report on how tax-cut law benefits corporations and the wealthy, not workers and families, and jeopardizes health care coverage for many.

WASHINGTON - Marking the six-month anniversary of the Trump-GOP tax cuts that were signed into law December 22, 2017, Americans for Tax Fairness today released a Six-Month Report Card showing how the tax cuts have affected employers, workers, families and health insurance premiums both nationally and in individual states. An analysis backing up the report cards grades is here. Not surprisingly, the massive Trump-GOP tax cuts, which cost $1.9 trillion, get a failing grade in each of five categories – fairness, increasing worker pay, overall cost, protecting healthcare and sharing the wealth. 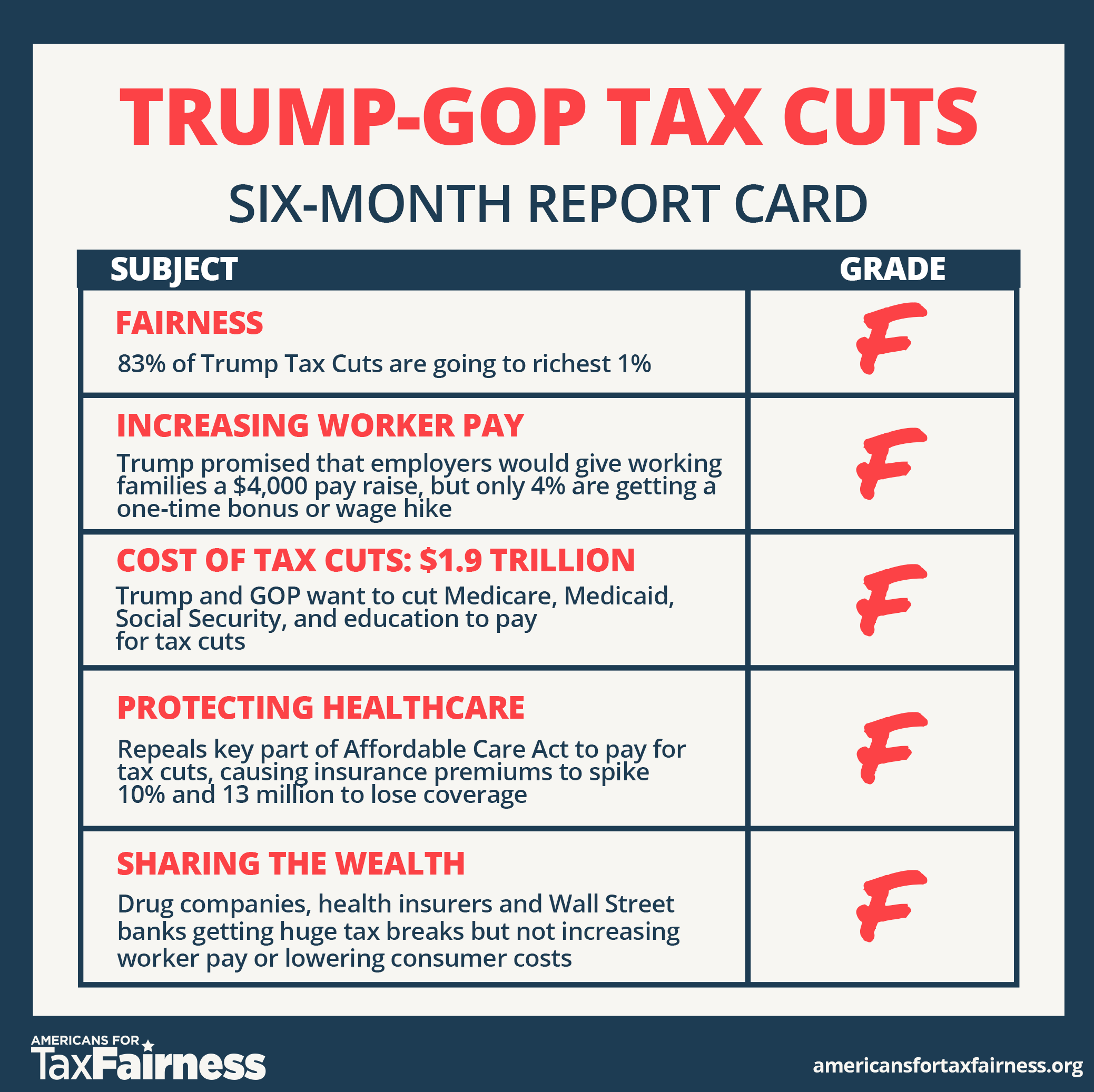 Along with the report card, ATF released a video and reports for 17 states showing how the tax cuts are primarily benefiting wealthy corporations and their shareholders and failing to raise wages for employees. A second report for the same states shows how the tax-cut law is causing health insurance premiums to spike throughout the country, and many state residents will lose their health care coverage because the tax law repealed a key provision in the Affordable Care Act.

“President Trump and the GOP promised that these huge tax cuts would primarily help the middle class, give workers a $4,000 raise, and lead to major business investment,” said Frank Clemente, executive director of Americans for Tax Fairness. “It’s now been six months since the tax cut law was passed, and none of those promises have come true. The law gets an ‘F’ for failing to deliver.”

Key findings from the ATF report show that:

In addition, by effectively repealing the individual mandate in the Affordable Care Act, the tax-cut law will cause:

“The Trump-GOP tax cuts are a disaster for workers, families and for health care coverage,” Clemente said. “First, the law repeals a key part of the Affordable Care Act, which will spike insurance premiums for many struggling families and older Americans near retirement age. Next, the tax cuts are jacking up the deficit giving conservatives in Congress an excuse to slash Medicare and Medicaid, and even Social Security.”

Despite the failure of the tax cut law to live up to the promises by its supporters, President Trump and members of his party are proposing a second round of tax cuts for the wealthy that could cost another $1 trillion. The resulting increase in the national debt will embolden conservatives to demand even more cuts to health care, education, nutrition services, housing and more. A letter from 130 national organizations opposed to these tax cuts is here.

7 Pointed Questions for Corporate Media About Their Anti-Progressive Biases

Don’t Listen to Davos. We, the People, Have the Solutions to Inequality

David Korten
The Time for Postponing Climate Action Is Over
END_OF_DOCUMENT_TOKEN_TO_BE_REPLACED

Because God knows he's under no pressure these unimpeachable days, Trump along with his unholy henchmen is big time doing up the "sanctity of life" thing - joining anti-abortion zealots, renaming Health and Human Services the gob-smacking "Department of Life," sending an official Space Force Bible into the cosmos and otherwise insisting he is “fighting for those who have no voice," as long as "those" are white, Christian and Trump-inclined. The irate consensus: " Good job doing fascism, guys."
Read More...
END_OF_DOCUMENT_TOKEN_TO_BE_REPLACED