219 Republican House Members Just Voted To Cut Medicaid, Medicare, And Public Education To Give Tax Breaks to Millionaires And Corporations.

WASHINGTON - Earlier today, the House of Representatives voted 219 to 206 in favor of the Republican House budget resolution that proposed $5.8 trillion in cuts over the next decade to Medicare, Medicaid, education, infrastructure and other critical services while paving the way for trillions of dollars in tax cuts that would mostly benefit the wealthy and corporations. The vote was almost entirely along party lines, with 18 Republicans joining all Democrats against the resolution.

The budget resolution also set up a procedure for fast-track consideration of tax legislation, enabling Senate Republicans to bypass bipartisanship to pass a tax plan with just 51 votes, rather than 60 votes typically required for such contentious legislation.

Congressional Republican leaders and President Trump released a framework for massive tax cuts last week that will cost at least $2.4 trillion, according to the non-partisan Tax Policy Center. The wealthy and corporations, which are primarily owned by rich shareholders, are the big winners. About 80% of the tax cuts will flow to the top 1% by 2027, when they would get a tax cut of $207,000, on average. That year under the plan, 3 out of 10 middle-class families making between $50,000 and $150,000 a year will pay $2,000 more in taxes, on average, depending on their income (the range is $1,300 to $2,500).

These large tax cuts will balloon the deficit and further jeopardize funding for Social Security, Medicare, Medicaid, and education. Included in the $5.8 trillion in cuts to services under the House-passed budget are Medicaid and other healthcare programs ($1.5 trillion), Medicare ($487 billion), and nutrition assistance ($150 billion).

“This budget resolution is the first step toward an immoral tax scheme that will hand trillions of dollars to millionaires and corporations at the expense of millions of America’s working families, many of whom will actually see a tax increase” said Frank Clemente, executive director of Americans for Tax Fairness. “These tax cuts for the wealthy and corporations will ultimately be paid for by cuts to Medicaid, Medicare, education, disability services, and other national priorities, while the expansion of the deficit will further threaten Social Security. The Republicans who voted to advance this plan owe their constituents an explanation.”

Below is an explanation of the tax cuts proposed under the Trump-GOP tax framework compared with the spending cuts proposed in the House budget resolution. 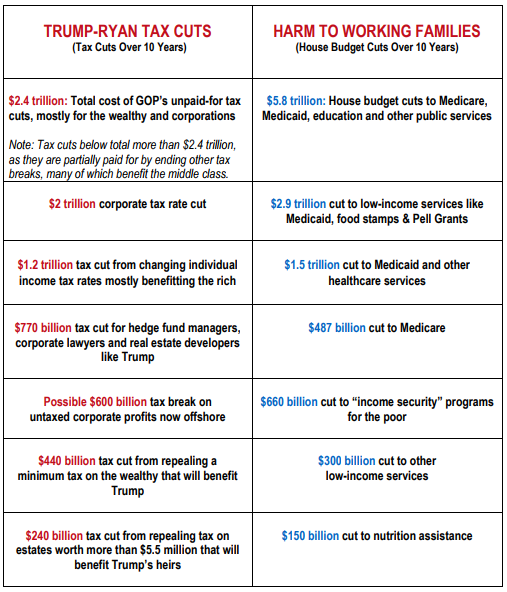 A more detailed version of this chart with sources is available here: https://americansfortaxfairness.org/wp-content/uploads/ATF-Comparison-of-Trump-Ryan-Tax-Plan-House-Budget-FINAL.pdf

Tax Breaks for the Richest 1%:

The Trump-Ryan tax plan eliminates estate and gift taxes, losing $240 billion over 10 years and boosting the inheritances of the very wealthy.The federal estate tax is paid only by estates worth at least $5.5 million, just 2 out of 1,000 estates, or only 5,500 estates in all of 2017. [Sources: Center on Budget and Policy Priorities (CBPP) and Tax Policy Center]

Repeal of the State and Local Tax Deduction:

The Trump-Ryan tax plan repeals the deduction for state and local taxes (SALT), raising taxes on the middle class and undermining local public services. Repealing SALT would raise $1.3 trillion over 10 years. Taxpayers can deduct state and local property taxes, and either income or sales taxes, from their federal taxable income. Over a third of taxpayers making $50-75,000 use the SALT deduction, and over half of those making $75-100,000. An average family in this last group would see their federal taxes jump by $1,800 if SALT is repealed. In addition to boosting middle-class taxes, repeal of the SALT deduction will make local taxation more expensive, putting pressure on localities to cut budgets for services like roads and schools. [Sources: Tax Policy Center, Government Finance Officers Assoc.

Israel's slaughter in Gaza goes on. Mercilessly following Ben-Gurion's Zionist edict for " maximum territory, minimum Arabs,” at least 120 Palestinians have been killed - a pregnant woman, an older couple, an entire family, chicken farmers, bystanders, 31 children. As 100 Democrats urge the U.S. to hold the lies, drones, money for ethnic cleansing, the victims clamor, "We are bleeding here." From one small furious boy, "All you nations sleeping through our pain - children are dying."
Read More...
END_OF_DOCUMENT_TOKEN_TO_BE_REPLACED