“Frank Pallone calls himself a climate champion, but he continues to take over one hundred thousands of dollars from the same people hell-bent on stopping action on climate change – fossil fuel CEOs and lobbyists,” said 18-year old Sunrise member Jeremy Ornstein.

Pallone, the presumptive incoming chairman of the House Energy and Commerce Committee, had previously attracted ire from climate advocates on Wednesday, when he spoke out against Ocasio-Cortez’s Green New Deal committee, as well as Nancy Pelosi’s less ambitious Select Committee on Global Warming.

While some Hill observers framed Pallone’s objections as a simple matter of turf-jockeying by a committee chair, the protesters framed the issue in starkly moral terms.

“Pallone and his funders are scared of the ambition in Ocasio-Cortez’s proposal because it threatens their wealth and power. His obstructionism may condemn my generation to a lifetime of climate-fueled chaos and violence,” said Sunrise Communications Director Varshini Prakash. “If he wants to prove that he cares about young voters who just delivered the House to Democrats, he must back Ocasio-Cortez’s plan and cut his ties with oil and gas executives.”

This week’s events have seismically shifted the conversation about climate change among Democrats in Washington. Sunrise Movement plans to continue increasing pressure on Congressional Democrats with a national day of action on Tuesday in support of Ocasio-Cortez’s resolution.

“Young people are leading the way for Democrats to step up and be real climate leaders, or step aside and get out of the way," said 350 Action Executive Director May Boeve. "For any shot at averting further climate catastrophe, Pallone and all elected officials must reject dirty fossil fuel money and fight for a Green New Deal that puts our climate and communities first. It’s not enough to acknowledge the reality of climate change — we need our representatives in Congress to walk the talk and support equitable solutions to this global crisis.” 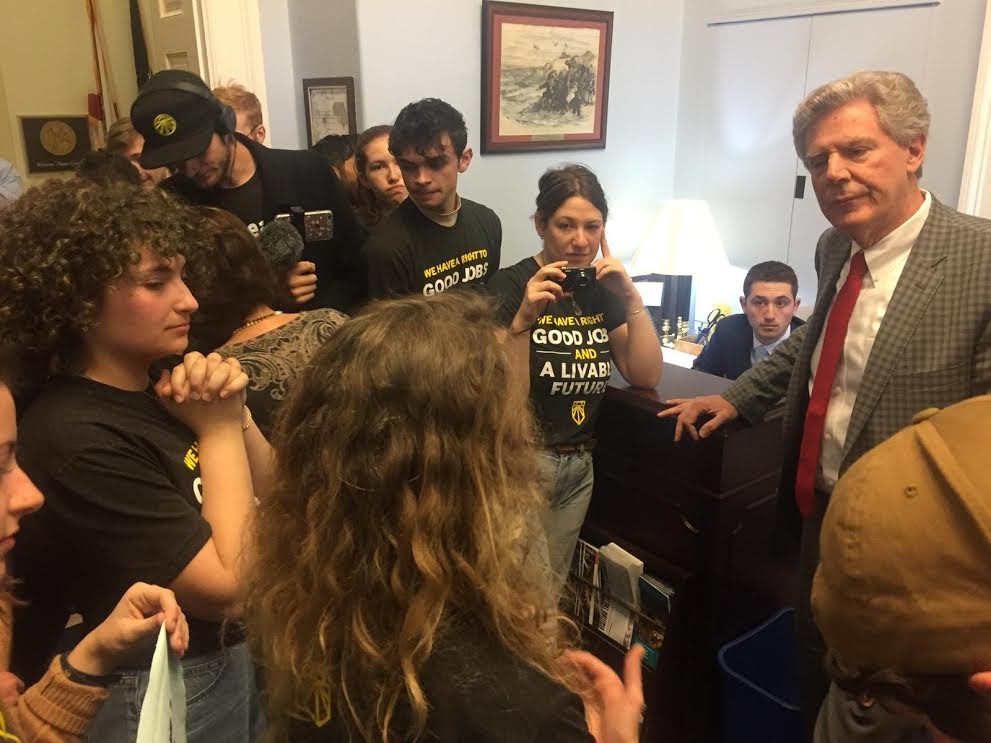 In the latest manifestation of a savage Gaza strategy they call "mowing the grass," Israel has killed from the aloof air at least 212 Palestinians. They include 61 children, 36 women, two doctors, 10 members of one family, 17 of another from age six months to 84 years, and Ahmed al-Mansi, who'd just posted a loving, heartrending video of going to the market to buy toys to soothe his three "sad" kids, jittery from the bombings. "Don't worry," he says as planes rumble above. "Keep playing."
Read More...
END_OF_DOCUMENT_TOKEN_TO_BE_REPLACED