Re-entering the Paris Climate Agreement Is Just Step One to Address the Climate Emergency: Frontline Women Must Lead the Way

Global people's movements and women leaders have been organizing for decades for climate justice, and community-led solutions.

Just over five years ago, 600,000 voices echoed through the streets of Paris as countless people’s movements marched through the city, demanding governments commit to robust and transformative climate action. It was only two weeks later that the Paris Climate Agreement, an unprecedented global accord signed by over 195 world governments, declared countries undertake efforts to combat climate change and keep global warming well below 2 degrees Celsius above pre-industrial levels with the aim of 1.5 degrees.

Since then, we’ve seen the climate crisis rapidly accelerate, leading to decades-long droughts and deadly fires in the west, record-breaking temperatures in the north, and unprecedented fatal hurricanes in the south—with many of our nation’s ecosystems on the brink of collapse. On Wednesday, the Biden-Harris Administration took its first important step forward in restoring the United States’ climate agenda by re-entering the Paris Climate Agreement and rescinding the presidential permit for the Keystone XL pipeline.

While the Women’s Earth and Climate Action Network (WECAN) is surely enthusiastic about the renewed commitment to the Paris accord, we know that to truly address the global climate emergency, governments must place front and center a climate justice framework, and not only fulfill, but exceed the targets in the Paris Climate Agreement— as scientists have warned is necessary. With last year’s COP26 delayed until this November because of the COVID-19 pandemic, governments have another year to set themselves on track, yet many of the world’s largest emitters remain stagnant and display a lack of ambition to curb emissions and cut pollution at a scale commensurate with the science and the climate crisis well underway. Additionally, research has found that overall nationally determined contributions (NDCs), which are required by the Paris Climate Agreement, do little to respond to the unique challenges and experiences of women. Unfortunately but not surprisingly, the Paris Climate Agreement and international climate talks continue to reflect unjust systems that are at the very root of the climate crisis, namely neoliberal economic models that drive the destructive commodification of nature and the implementation of market-based mechanisms that often harm people and planet. Furthermore, the climate negotiations are influenced by patriarchal and colonial ideologies and policies that suppress the critical relationship between gender equity, racial justice, women's leadership, and climate solutions, and continue to silence and ignore Indigenous peoples— their rights, sovereignty, and acutely needed Indigenous knowledge and solutions. For the U.S. to “build back better” the Biden-Harris Administration must employ a feminist agenda with the solutions and leadership of frontline, impacted communities— especially women of color, Black women, Indigenous women, people with disabilities, LGBTQIAP+ people, people from the Global South, migrant and refugee communities, and youth.

Due to gender inequality globally, women are facing the impacts of climate change first and worst, yet are simultaneously and inextricably linked to solutions in their communities. They are mobilizing to reimagine new economies and a Just Transition, secure Indigenous rights and knowledge, protect forests and oceans, uplift food justice, defend their territories from mining and fossil fuel extraction, advocate for Rights of Nature, and build a renewable and sustainable future. We cannot achieve sustainability without women’s leadership, particularly centering the leadership of women of color and Indigenous women.

As the United States re-enters the Paris Climate Agreement, there are many ways in which the Biden-Harris Administration can act in alignment with feminist and women-led climate movements.

At the national level, women-led organizations and feminists in the U.S., including our organization, are advancing critical principles, known as the Feminist Agenda for a Green New Deal, that focus on the leadership of women, and acknowledge and address the generational impacts of colonization and anti-Black racism. The Principles advocate for inclusive climate policies and programs that require intersectional gender analysis, confront institutional patriarchy and racism, encourage regenerative economies that center care and systemic feminist alternatives, and much more— including the recognition that U.S. policies must be international in scope, meaning there is no such thing as domestic climate policy. 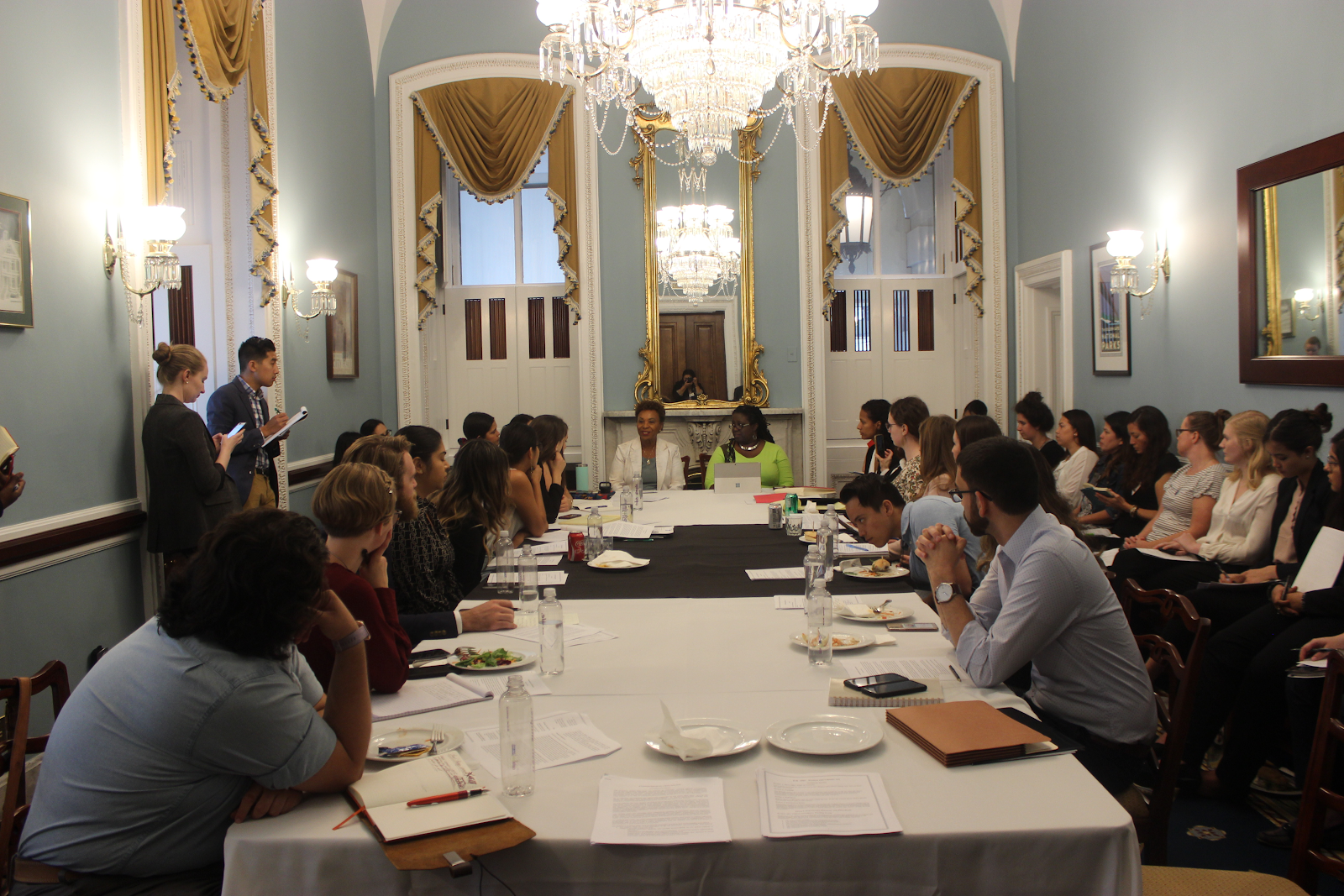 The United States is historically one of the largest carbon emitters in the world, and continues to negatively impact Global South countries and Island Nations that are challenged with increased climate disasters and rising sea levels. Additionally the U.S. has spent decades advancing imperialist foreign policies and extractive agendas that undermine peace and human rights in other countries while worsening the climate crisis. Many of our colleagues are advocating for a crosscutting feminist foreign policy that provides a blueprint for the Biden-Harris Adminstration to increase transparent foreign assistance and include gender justice and ecological integrity in its foreign policy agenda moving forward.

Also at the international level, the Women and Gender Constituency (WGC) of the United Nations Framework Convention on Climate Change (UNFCCC), which WECAN is a part of, continues to offer important policies that address gender and racial disparity and the climate crisis, calling out the need to reject market-based false solutions and instead invest in human rights-based and gender just climate action. After years of advocacy by the WGC, during the 2019 COP25, governments successfully passed the Gender Action Plan (GAP), which outlines a greater focus on implementing gender-responsive climate solutions.

Though separate from the Paris Climate Agreement, the GAP sets a historic precedent for the inclusion of rights-based language, such as human and Indigenous rights, within the policies and practices adopted by countries, and will guide gender-responsive climate policy and action for the next five years. As the U.S. re-engages with the climate talks this year, the Constituency will continue to recommend countries move beyond carbon offset schemes and instead focus on just climate solutions and efforts that are community-led and are imperative for climate mitigation, carbon sequestration, and the protection and restoration of vital and biodiverse ecosystems.

In the near term, the Biden-Harris Administration must prioritize keeping fossil fuels in the ground. WECAN joins the call for President Biden to Build Back Fossil Free by ending the era of fossil fuel production and instead, investing in the Black, Indigenous, Brown, and working-class communities that are bearing the brunt of fossil fuel extraction and climate chaos throughout the United States. We deeply celebrate President Biden’s executive action yesterday to rescind the presidential permit for the Keystone XL pipeline, and urge him to also take action immediately on the Dakota Access and Line 3 pipeline projects. Just last week, over 75 Indigenous women leaders from across the country sent a letter to the new Administration calling for executive action to uphold Indigenous rights and protect the climate and water by halting all three pipeline projects. 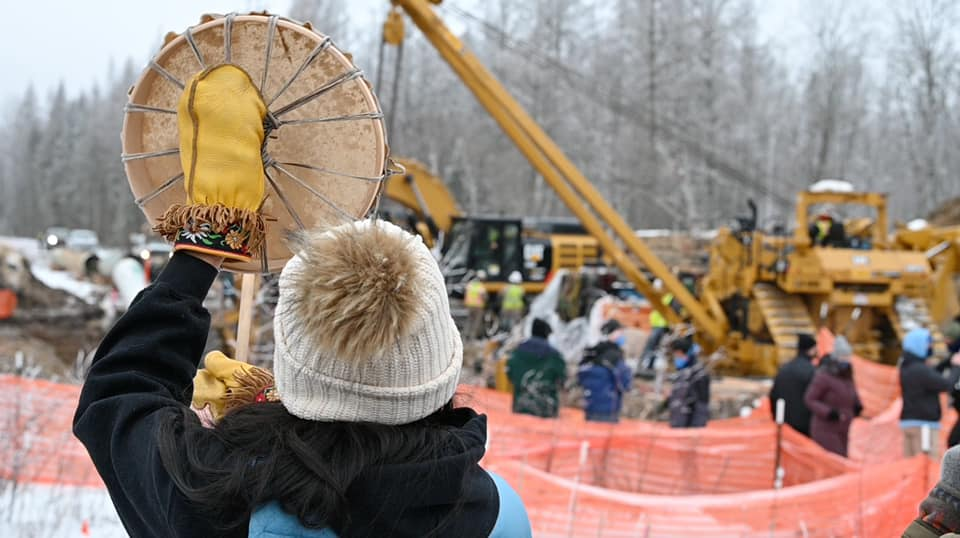 As countries prepare to “take action” at COP26 in November of this year, here in the U.S. we can advocate for stronger carbon reduction and climate finance commitments, an end to fossil fuel extraction and infrastructure, increased forest protection, respect for Indigenous rights, an end to sacrifice people and sacrifice lands, an end to environmental racism, and tangible actions that meet the urgency of this moment.

Global people’s movements and women leaders have been organizing for decades for climate justice, and community-led solutions. We the people continue to act with fierce love for our communities and the planet in mind, and will hold those accountable for the damage they have done, while continuing to offer a different path forward. We call for the protection of Mother Earth, and we envision a healthy, thriving, just world for current and future generations. This moment must be a turning point, there is no other option.

Osprey Orielle Lake is the Founder and Executive Director of the Women’s Earth and Climate Action Network (WECAN) International and serves as Co-Chair of International Advocacy for the Global Alliance for the Rights of Nature. Follow on Twitter: @WECAN_INTL

Katherine Quaid (Cayuse/Nez Perce/Paiute) is the communications and outreach coordinator for the Women's Earth and Climate Action Network (WECAN) and a citizen of the Confederated Tribes of Umatilla. Her dedication to climate justice is tied to the lands of her ancestors and the many communities around the world fighting for a healthy future.

Michael Winship
Same Old, Same Old from the Mouth That Roared
END_OF_DOCUMENT_TOKEN_TO_BE_REPLACED
Connect With Us

END_OF_DOCUMENT_TOKEN_TO_BE_REPLACED

Banksy's newest, a two-fer Oscar Wilde tribute and call for prison reform, shows a prisoner climbing down bedsheets ending in a typewriter from Reading Gaol, known for housing Wilde during his two years' hard labor for "gross indecency" - being gay. Video juxtaposes Banky creating it with TV artist Bob Ross burbling about freedom; both are haunted by Wilde's final searing poem about the cruelty and bleakness of life behind bars: "Something was dead in each of us/and what was dead was hope."
Read More...
END_OF_DOCUMENT_TOKEN_TO_BE_REPLACED