SUBSCRIBE DONATE
Published on
Friday, February 14, 2020
by
Fairness and Accuracy In Reporting (FAIR)

For Media in New Hampshire, Losing Is Winning and Winning Is Losing

Sanders is the frontrunner going into the next Democratic debate on Wednesday. But don’t expect the media to treat him particularly well.

Someone like Sanders, who promises to take on the power and influence of the rich, is an unwelcome intrusion into politics as usual. (Photo: Bloomberg column 2/10/20)

The results from the New Hampshire primary are in—mercifully quickly—showing Vermont Sen. Bernie Sanders victorious with 26% of the vote, ahead of former South Bend mayor Pete Buttigieg with 24%. However, it was third place Amy Klobuchar, with 20%, who seemed to draw the greatest media buzz. The Minnesota senator has received a lot of press attention of late—almost all of it positive.

Why losing is actually winning 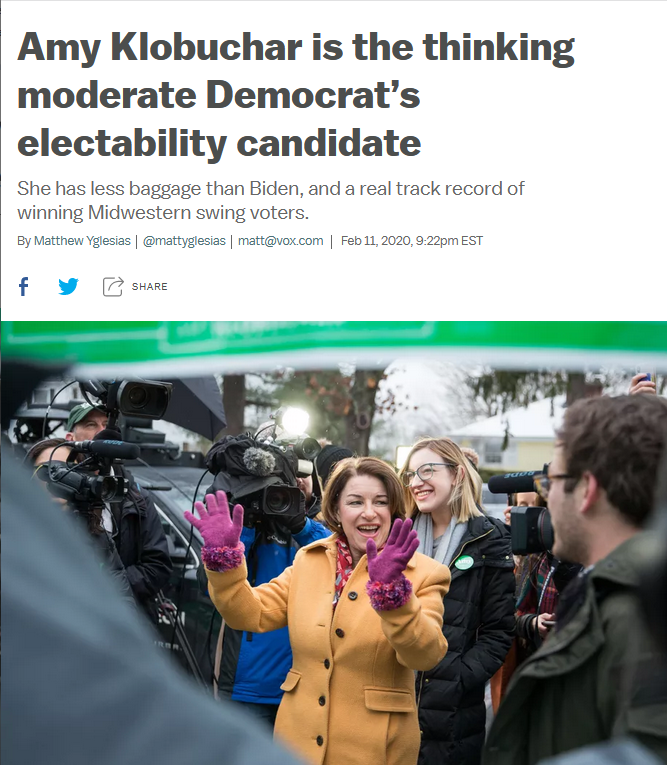 CNN’s election panel (2/12/20) heaped praise upon her; former Virginia Gov. Terry McAuliffe described her performance as “spectacular,” while Democratic strategist David Axelrod claimed she “has a great personal touch.” Vox’s Matthew Yglesias (2/11/20) called her “the thinking moderate Democrat’s electability candidate.” The Week (2/10/20) said she had “clearly touched a chord” with the electorate, and NPR (2/12/20) claimed her third place was a victory that “shocked the establishment.”

The Christian Science Monitor (2/11/20) suggested her rise was a win for Midwestern values and pragmatism, portraying her as the “kinder,” “forgiving” and “empathetic” candidate. This might surprise some readers, as Klobuchar presents herself as a tough-on-crime former prosecutor, and is known for previously assaulting her staffers (Vanity Fair, 3/15/19).

Other outlets went even further. Bloomberg’s headline (2/10/20) insisted that “In New Hampshire, a Third-Place Finish Could Still Be a Win,” with the organization tweeting (2/12/20) that “Bernie Sanders may have come first in New Hampshire, but Amy Klobuchar won.” CBS Minnesota (2/12/20) also declared that the “third place finish for Sen. Klobuchar was a ‘win.’” MSNBC commentator Adrienne Elrod  (2/11/20) explained the thinking:

There you have it: Third is officially better than first.

The reason Klobuchar was “the story of the night,” NPR (2/12/20) helpfully admitted, was because “the search is on for the Sanders alternative.” “If Bernie Sanders looks like he’s running away with it, for the Democratic establishment that’s almost as scary as losing to Donald Trump,” said MSNBC Morning Joe host Willie Geist (2/3/20), explaining that the Democrats could look to Mike Bloomberg as their “political savior.” “It may not be to get the 50%” of delegates, he said. “It may just be to stop Bernie and open the door for somebody else.”

Why winning is actually losing 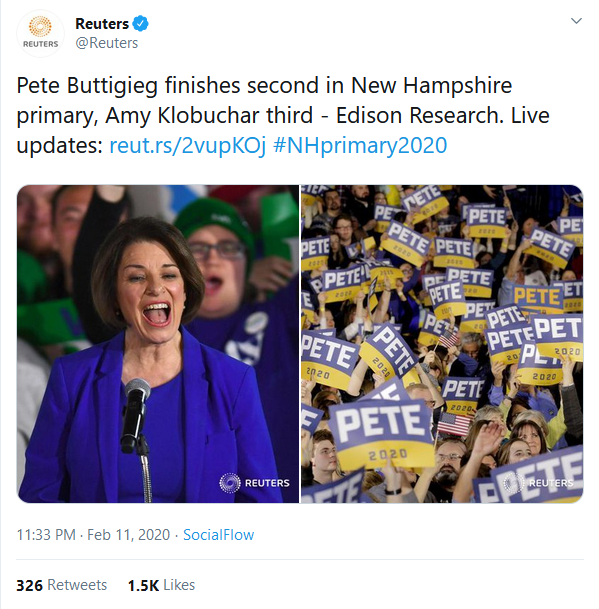 Another way to present a victory as a loss was to combine the vote totals of all the “moderate” candidates to show that “Sanders could lose the Democratic nomination to a unified centrist vote” (Business Insider, 2/12/20). This is based on the assumption that supporters of particular candidates see themselves as belonging to ideological camps that don’t cross over—a dubious premise.  For example, polling suggests that if Joe Biden were to drop out of the race, the biggest bloc of his supporters would switch to Sanders as their second choice.

Nevertheless, Vox (2/12/20) argued that the results “show Bernie Sanders still has an ‘electability’ problem,” claiming that exit polls showed that voters who prioritized beating Trump, rather than someone who they agree with on major issues, chose Buttigieg.  But this is a false dichotomy that ignores the fact that words like “electable” and “pragmatic” have been coded for decades to mean “right-wing” or “pro-corporate” (Extra!, 9/1/92, 7/1/06; FAIR.org, 1/1/95, 3/16/10, 8/21/19).

It also ignores the reality that Sanders does better in head-to-head polls against Trump than either Buttigieg or Klobuchar, who often lose to the president. If media analysts can’t seem to recognize this reality, voters increasingly do; in the latest Morning Consult poll (The Hill, 2/12/20), more voters (29%) named Sanders as the most likely to beat Trump than any other candidate.

To grasp the absurdity of the comparison, let’s imagine you own an ice cream store. You sell only two flavors: vanilla and chocolate. Chocolate is the most popular, making up 60% of sales. You then start selling eight more flavors, making ten. Chocolate is still the most popular: 26% of customers choose it. Would anyone in their right mind think, “What the hell is the problem with chocolate? No one is buying it any more!” Would any functioning adult, let alone ice cream business specialists, be unable to grasp why you’re selling fewer bowls of chocolate than previously? Yet political journalists across the board have apparently failed to understand that 2016 was effectively a two-horse race between Sanders and Hillary Clinton, whereas at least ten major candidates stood this time. And the fact that some people picked strawberry or pistachio does not necessarily equal a rejection of chocolate.

Of course, the actual reason journalists perform mental gymnastics worthy of an Olympic gold medal is that they are parts of large international corporations owned by the extremely wealthy, and funded (through advertising) by other extremely large corporations. Someone like Sanders, who promises to take on the power and influence of the rich, is an unwelcome intrusion into politics as usual. That’s one reason why we are deluged with stories about how Medicare for All is a really bad idea (FAIR.org, 4/29/19) or that billionaires don’t like socialism (FAIR.org, 2/3/20).

Sanders is the frontrunner going into the next Democratic debate on Wednesday. But don’t expect the media to treat him particularly well. Chuck Todd, who this week referred his supporters as the “digital brownshirt brigade”—referring to the Nazi paramilitaries who rounded up and executed people like Sanders’ family—is moderating it.

END_OF_DOCUMENT_TOKEN_TO_BE_REPLACED

Improbably, the backstory of the vicious barking clown's latest cheap stunt is as slimy as the Bible-brandishing con itself. When Barr's thugs burst in to clear St. John's Church - "with their black shields and the whole bit" - they ejected and gassed clergy there to support protesters. Later, pastors of color turned up to warn, “God is always on the side of the oppressed." So did a devout George Floyd by video: In the end, he admonishes the wayward, "It's gonna be you and God."
Read More...
END_OF_DOCUMENT_TOKEN_TO_BE_REPLACED