No industry is more unpopular than the pharmaceutical industry.

New polling from Data for Progress shows that Democrats, Republicans, and Independents are united in their support for policies that would radically restructure the current system. (Photo: Floris Van Cauwelaert/flickr/cc)

As the 2020 election looms, "Morning Joe" pundits love to talk about "electability." The out-of-touch television personalities chide the left for advocating policies they perceive as unpopular with the electorate. Yet, "electability" appears differently to primary voters, who increasingly see progressive politicians as prepared to beat Trump. The message that Democrats need to return to is an age-old one: rich, powerful interests are ripping us off, and it’s time to fight back.

According to Gallup, no industry is more unpopular than the pharmaceutical industry, and that makes it the perfect target for progressives. In the presidential election, a strong message on pharma can unite the base and win swing voters by giving hope of lower drug prices and reminding voters that Trump has done nothing to help. In the Senate, Democrats need to slam vulnerable Republicans like Thom Tillis (North Carolina) and Cory Gardner (Colorado) for bankrolling their campaigns with money from the pharmaceutical industry.

New polling from Data for Progress shows that Democrats, Republicans, and Independents are united in their support for policies that would radically restructure the current system. Support was nearly unanimous for policies such as requiring public disclosure of pharmaceutical research costs and allowing Medicare to negotiate with pharma companies. Even relatively radical policies like prohibiting direct-to-consumer advertising of drugs and allowing the government to manufacture drugs have majority support.

Our tax dollars fund basic research and development for nearly every new prescription drug. We pay to grant and protect patent monopolies, often through rigged trade deals. And then we pay the highest drug prices in the world.

Even when we tested opposition messages against these policies, voters remained overwhelmingly supportive. And the messages weren’t weak. Voters were told “that this is a waste of taxpayer money and that the government can’t run a Department of Motor Vehicles correctly, much less a drug manufacturer.” Of another policy, voters were warned that “this will reduce the incentives for companies to invest in new innovations, ultimately resulting in fewer life-saving drugs.”

Americans spend substantially more on prescription drugs than people in any other industrialized country—and we know it. Indeed, we pay in three different ways. Our tax dollars fund basic research and development for nearly every new prescription drug. We pay to grant and protect patent monopolies, often through rigged trade deals. And then we pay the highest drug prices in the world.

These higher prices don’t just cost us money. They also cost us time. Most importantly, they cost us our health. We spend countless hours arguing with insurance companies. Our doctors are often forced to present more and more evidence that their patients need specific drugs—the dreaded “prior authorization.” Our health in the United States is not a matter between patients and their doctors, as it should be. Instead, it is between a customer, a doctor, an insurance bureaucrat, and a hedge fund executive running a pharmaceutical corporation.

Getting additional tests or a second opinion costs precious time—time better spent restoring our health. Worst of all, almost one in five Americans say that they skip doses of medication or ration it due to cost.

And negotiation on its own is not enough. We must also end pharmaceutical corporations’ abuse of patent monopolies. Modern patents date back to the 15th century. The idea is for governments to provide inventors a short period of time of monopoly control to earn back their investments and to encourage innovation.

Pharmaceutical corporations abuse those patent protections in myriad ways, like continually making minor changes to their drug formulas and then registering them as new patents. Or they file dozens or even hundreds of patents around a single drug. In fact, most of the “innovation” that the pharmaceutical industry brings is in gaming the patent system. This enables them to maintain their monopolies, and charge sky-high prices, indefinitely. We need to change the system to only reward innovation in health, not in rigging the system.

Much of pharmaceutical corporations’ exorbitant profits goes to lobbying to protect their profits—not to innovation. This creates perverse incentives, including for pharma companies to pay off generic drug manufacturers not to create a generic version of their drugs, so they don’t face competition. Drug companies are also incentivized to conceal evidence that reflects poorly on their drugs. Studies show that the cost of improper drug use due to deliberate misrepresentations and misleading marketing is substantial.

When it comes to the development of new prescription drugs, yet another broken incentive comes into play. It’s very profitable for drug companies to develop 50 different versions of Viagra—and very unprofitable for them to develop medications that cure diseases.

By increasing the already sizable resources we, through our taxes, put into research and development, we can guide the system to focus on public health instead of maximizing profit. After a drug has been researched and developed with taxpayer money, it needs to be available to the public as a low-priced generic—not turned over to a giant corporation.

We must also reform the generic drug market, so that drug companies can no longer collude to keep prices high. At the same time, we have to address the fact that there are many drugs that should be available as generics but aren’t. In both instances, a larger role for government in manufacturing prescription drugs would solve these failures.

Data for Progress’s new polling proves that these are the policies the American people want. Support for them cuts across all of our society’s traditional fault lines, including ideology, geography, race, religion, and preferred news source. It is time to ensure our elected politicians are working for us. 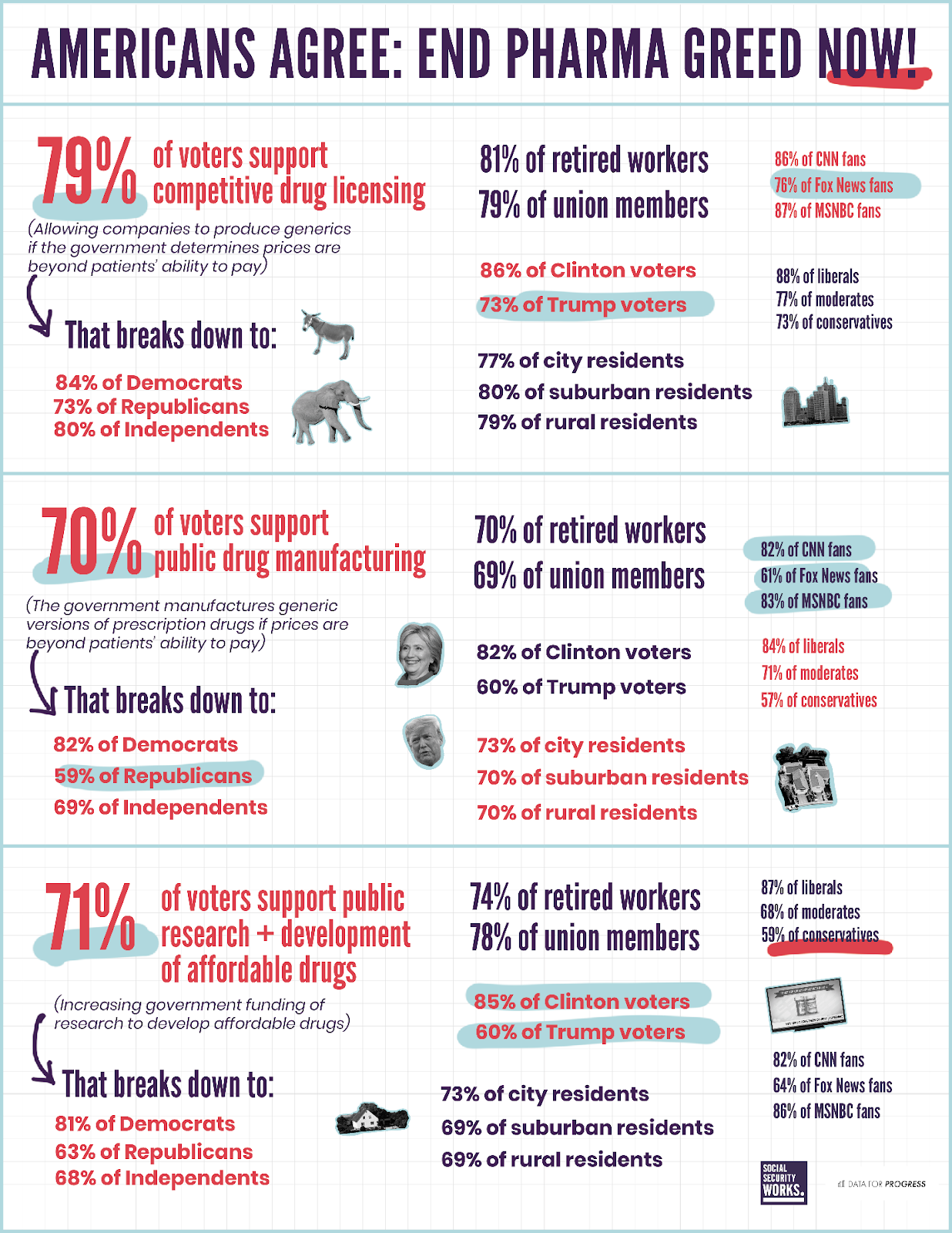 We found that 79 percent of voters support allowing companies to produce generics if the government determines prices are beyond patients’ ability to pay. That includes 84 percent of Democrats, 73 percent of Republicans, and 80 percent of Independents.

A large majority of voters want to go even further. Seventy percent of voters support having the government itself manufacture generic versions of prescription drugs if prices are beyond patients’ ability to pay. That includes 82 percent of Democrats, 59 percent of Republicans, and 69 percent of Independents.

Mitch McConnell would undoubtedly call public drug manufacturing "socialism," a label he’s already slapping on any drug pricing proposal that isn’t written by his pharmaceutical corporate paymasters. But Republican voters clearly disagree. This provides a powerful political opportunity for Democrats, which also happens to be great policy. Democratic leaders just need to be bold enough to listen to the people.

This article was produced by Economy for All, a project of the Independent Media Institute.

'It Has to Go': The Demand to End Filibuster Intensifies in US Senate

END_OF_DOCUMENT_TOKEN_TO_BE_REPLACED

Banksy's newest, a two-fer Oscar Wilde tribute and call for prison reform, shows a prisoner climbing down bedsheets ending in a typewriter from Reading Gaol, known for housing Wilde during his two years' hard labor for "gross indecency" - being gay. Video juxtaposes Banky creating it with TV artist Bob Ross burbling about freedom; both are haunted by Wilde's final searing poem about the cruelty and bleakness of life behind bars: "Something was dead in each of us/and what was dead was hope."
Read More...
END_OF_DOCUMENT_TOKEN_TO_BE_REPLACED