SUBSCRIBE DONATE
Published on
Thursday, September 05, 2019
by
Fairness and Accuracy In Reporting (FAIR)

As Brazil Burns, Northern Media Deploy a Strategy of Deflection

Instead of handwringing about the tragedy while trying to shift the blame, or acting like these devastating fires will somehow fight poverty, journalists should work harder to explain the role Northern business groups have in the process, and encourage boycotts against companies like Cargill. 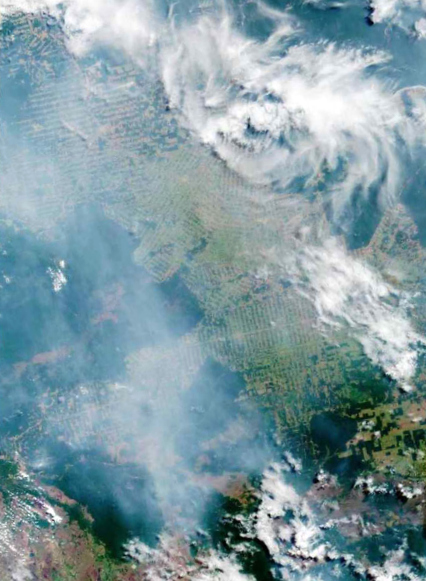 I spent last week in the Brazilian Amazon in Porto Velho, Rondonia, on the edge of what is called the arco do incendios. The “arc of fires” is a region stretching along the yet-to-be-paved highways 319 and 230, between the towns of Humaitá and Apui in Southern Amazonas, a state that still had 98% of its virgin rainforest intact as of last year.

It is a place where soy farmers and cattle ranchers connected to international corporate supply chains are ripping down and intentionally burning forest at record rates. Humaitá, where a group of ranchers and farmers in 2017 set fire to the headquarters of IBAMA, the environmental protection agency, has a new soy terminal in its river port.

Soy production for foreign markets, coupled with far-right government of President Jair Bolsonaro’s gutting of environmental protection agencies, are two drivers of the current, catastrophic increase in fires and deforestation. Minnesota-based Cargill corporation, which the environmental organization Mighty Earth recently called the Worst Company in the World, appears to be a main catalyst in this process.

Former President Lula, who reduced deforestation by 70% during his tenure, was arrested and removed from last year’s presidential race as part of a US Department of Justice–backed investigation, with no material evidence,while he was leading the election polls with double the support of Bolsonaro. Shortly after his arrest, Cargill announced it was building a new soy terminal port in Porto Velho on the edge of highway 319 on the Madeira river, expanding its soy export capacity there from 3.5 million to 6 million tons per year. It appears that increased rainforest devastation is calculated into Cargill’s business plan.

After helping develop cattle production in the Amazon during the 1970s and 1980s, US companies are no longer the major importers of Amazonian beef; that’s now China and the European Union. Amazon deforestation still generates billions of dollars a year for mining, energy and agribusiness corporations that spend a lot of advertising money, though, and there is constant pressure to beat back against the information provided by environmental NGOs such as Greenpeace, and to reframe it to make it appear less threatening.

As the world’s attention focused on the fire crisis last week, media companies employed several strategies to deflect attention from its root causes. As coverage shifts to other events such as Hurricane Dorian, it is important to remember that there is no end to the fires in sight. Continued fighting is needed to stop an environmental catastrophe, and to do this, we need to focus on causes and how it can be stopped. Unfortunately, this does not seem to be happening. The following are a few examples of how media are working to please their advertisers by deflecting and confusing their information consumers.

1) Resuscitating the ‘Conservation vs. Development’ trope 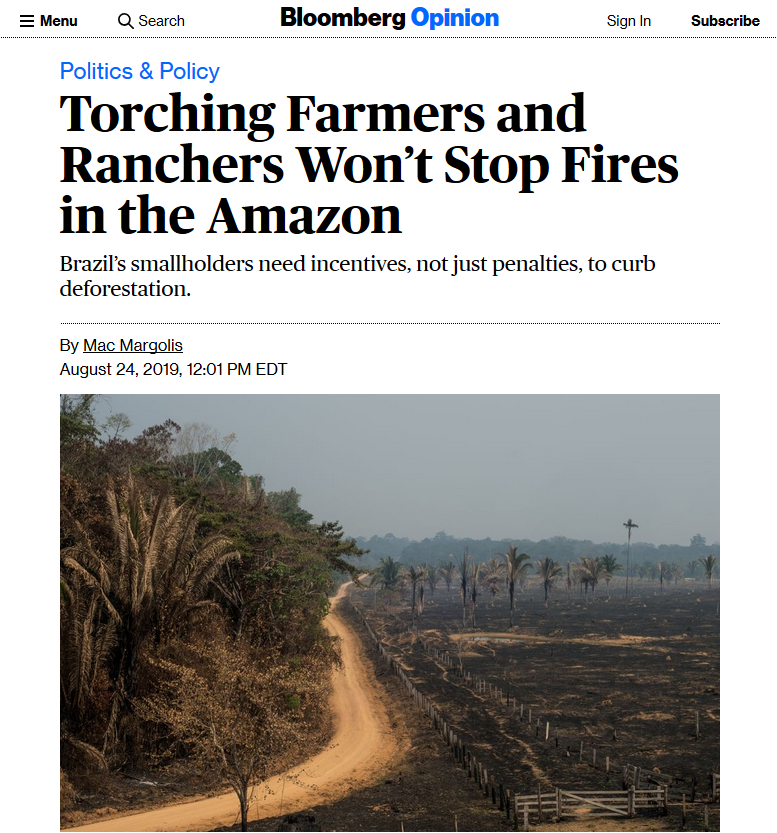 On August 26  I appeared on Rupert Murdoch’s Sky News to talk about the Amazon fires. I welcomed it as an opportunity to speak to a lot of people “outside the bubble,” and try to put some cracks into their narrative on the fires on live TV. I doubt they will invite me on again.

After attempting to steer the conversation into Brazilians’ supposed apathy over the deforestation—something that recent polling data and a wave of protests prove is blatantly untrue—the newscaster asked me the following:

President Bolsonaro is prioritizing economic opportunities for Brazilians over protecting the environment. And Brazil…has huge poverty. How much do people care more about the economy and their own livelihoods, because it’s simply a priority over the environment?

This was a loaded question built on the false assumption that destroying the environment for short-term capitalist gain benefits society as a whole.

Sky wasn’t the only company pushing this narrative. In Bloomberg (8/24/19), Mac Margolis raised a similar argument, disconnecting the ranchers and plantation owners setting the fires from the international supply chain, and suggesting that further ranching and monoculture production will lower poverty in the region.

Brazil is a country with a 500-year history of monoculture and mining commodity boom-and-bust cycles, which has always produced high levels of income inequality and poverty. This pattern only began to be broken under Workers Party President Lula, through the implementation of redistributive socioeconomic polices, most importantly through massive minimum wage and pension payment increases, which lifted 29 million people above the poverty line. It is absurd to imagine that a monoculture production-based approach tied to the international supply chain, using low labor-intensity activities such as cattle ranching and soy farming on indigenous reservations, will make up for the setbacks caused by the post–2016 coup’s dismantlement of successful poverty-fighting policies and gutting of labor laws, which have plunged millions of people into extreme poverty.

Furthermore, development vs. conservation is not an either/or issue. Rondonia’s neighboring state of Acre has generated billions of dollars through preserving its rainforest and focusing on renewable forest resources such as rubber, brazil nut and açai, becoming a world reference in sustainable development. Unfortunately, Acre’s governor recently declared a state of emergency, due to fires resulting from new incursions by international beef, mining and soy supply chain actors into the rainforest.

2) Focus on social media bickering between Bolsonaro and Macron 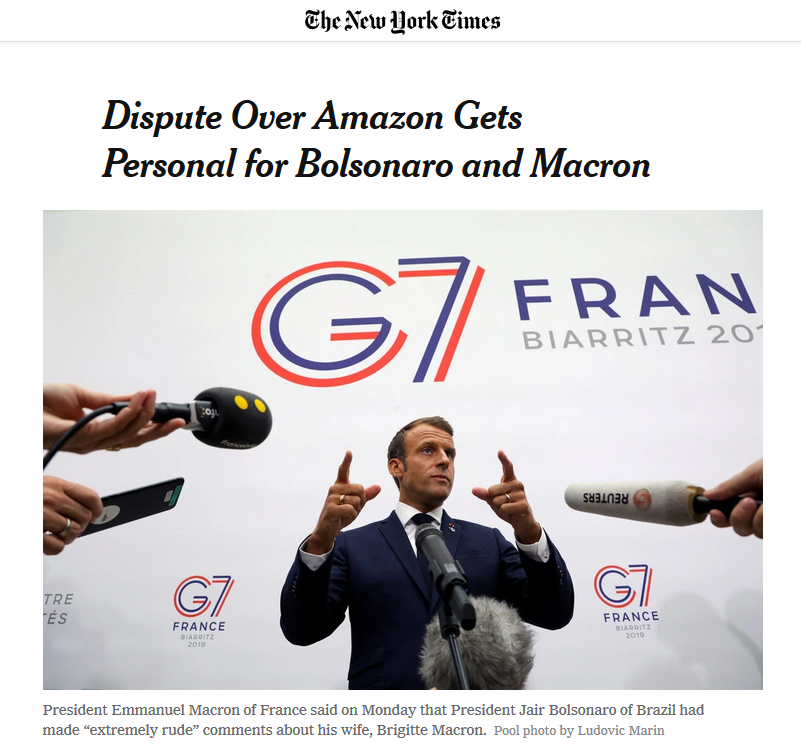 The Rondonia state political apparatus is now ruled over by Bolsonaro’s PSL party and supported by the big ranchers and plantation owners. The state environmental protection/policing agency, IBAMA, has not had a superintendent since February and is completely paralyzed. Restoring functionality to IBAMA, which lost half its funding after the 2016 coup and has been further gutted by the Bolsonaro administration, should be a top priority now.

All that Bolsonaro’s action of sending 400 air force personnel with picks and shovels to put out a few of the fires for the TV cameras will do is cause his support base to wait for a few days to start new fires—something that I witnessed beginning last week in Rondonia when, as the international journalists began to leave town, the city of Porto Velho found itself covered in smoke once again.

Instead of focusing on this, as the fires raged on last week, Bolsonaro’s bickering with French President Emannuel Macron on Twitter over Brazil’s refusal to accept the EU’s laughably low offer of 20 million euros to “put out the fires” began to crowd out headline space from articles about the roots of the crisis.

3)  Socialism is destroying the rainforest 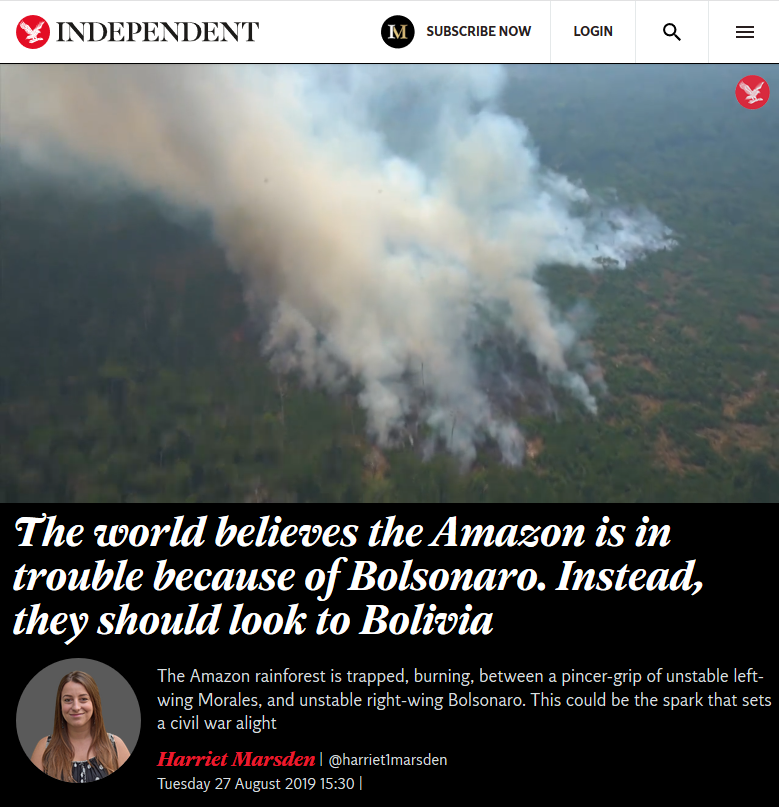 According to recent articles in the Guardian, Independent and New York Times, it is the brush fires underway in the semi-arid Chaco biome in lowland Bolivia, and not the destructive policies currently being pushed by the Bolsonaro government, that are the real cause of the destruction of the Amazon.

“The World Believes the Amazon Is in Trouble Because of Bolsonaro. Instead, They Should Look to Bolivia,” declares a recent op-ed piece in the Independent (8/27/19). On September 2, the Guardian ran an article labeling Bolivian President Evo Morales as a “murderer of nature.” In the New York Times (8/30/19), Simon Romero—a key actor in the character assassination campaign against Dilma Rousseff during the lead-up to the 2016 coup—failed to give equal time to Morales while quoting US- and agribusiness-backed right-wing opposition candidate Carlos Mesa: “These fires were caused by Evo Morales and his policies.”

Putting the situation in Bolivia on par with Brazil constitutes a false equivalency. First of all, the fires raging in Bolivia are not actually taking place in the Amazon jungle. Second, at a time when Bolivia, which has a GDP 50 times smaller than that of Brazil, has invested heavily in fighting the fires, and Morales has called for a UN Assembly to address the crisis and is using better equipment to fight it, Bolsonaro’s congressional allies pushed an amendment through the Congressional Justice Committee which will legalize destruction of 11.5% of the remaining Brazilian rainforest. The attempted deflection of the issue from Brazil to Bolivia  seems more tied to Northern geopolitical objectives in the region than addressing the crisis—coming as it does during a Bolivian election campaign in which the US government has been accused of funding the conservative opposition candidate, as part of its project to roll back the “pink tide” of left and center-left governments that came to power in Latin America during recent decades.

Bolsonaro’s encouraging international supply-chain actors to rip down the rainforest is driving the crisis. There is no sign of any end to these fires in sight. Instead of handwringing about the tragedy while trying to shift the blame, or acting like these devastating fires will somehow fight poverty, journalists should work harder to explain the role Northern business groups have in the process, and encourage boycotts against companies like Cargill that have a financial stake in destroying the rainforest and the people who live there. The future of our children and grandchildren depends on it.

Brian Mier is co-editor at Brasil Wire and editor of the book Year of Lead: Washington, Wall Street and the New Imperialism in Brazil. He has lived in Brazil for 25 years.

END_OF_DOCUMENT_TOKEN_TO_BE_REPLACED

Wow. The dog whistle's become a fog horn these dark and threatening days with Trump's new re-election merch: An "America First" - whiff of fascism here - t-shirt that looks queasily, uncannily like the Iron Eagle, the symbol of the Nazi Party. " It’s not an accident," wrote Bend the Arc, which also caught the recent concentration-camp-style red triangles. "Bigotry is their entire brand." And yes, there are eagle images - U.S. seal, Marines - that aren't Nazi symbols. This...is.
Read More...
END_OF_DOCUMENT_TOKEN_TO_BE_REPLACED