WASHINGTON - America’s big Wall Street banks and financial firms, profiting handsomely from the new Trump-GOP tax law, are using the bulk of their huge tax-cut savings to further enrich their already wealthy shareholders and executives while sharing little or nothing with their rank-and-file workers, according to a new Americans for Tax Fairness analysis of corporate filings and other data.

The nation’s Big 6 Wall Street banks—Bank of America, Citigroup, Goldman Sachs, JP Morgan Chase, Morgan Stanley, and Wells Fargo—are among the biggest winners from the Trump-GOP tax cuts, collectively saving an estimated $14 billion in 2018 alone. [See table below] That’s 25 times more than three of the six banks have promised to give their workers in pay raises and one-time bonuses purportedly related to the tax cuts. The other three big banks have not publicly announced that they will share any of their tax cuts with their employees.

In the first three months of 2018 alone, the Big 6 received a tax-cut windfall of $2.9 billion. That’s enough to give all of America’s 3.2 million full-time public-school teachers a raise of more than $300 for each of those three months. Yet only Bank of America, JP Morgan Chase, and Wells Fargo have announced plans to pass along any of that bounty to their employees. The $550 million in estimated wage increases and one-time bonuses represent only a small fraction of the industry’s tax savings, and they pale in comparison to what the banks are showering on their shareholders and executives.

Ten years ago, many of these same banks were at the center of the financial crisis that caused $6 to $14 trillion in economic losses in the U.S. alone, cost millions of jobs and led to millions of American families losing their homes. The big Wall Street banks caused the crisis by taking irresponsible risks, using deceptive and fraudulent practices to sell "toxic" mortgage securities to investors, and exploiting home buyers through exploitative mortgage loans. Yet they were bailed out by the government—to the tune of $160 billion for the Big 6—and their executives paid no personal price. Now they are being rewarded by the Trump Administration through massive tax breaks and deregulation.

In this year’s first quarter, the Big 6 distributed nearly $23 billion to their shareholders, made up of more than $16 billion in net stock buybacks (the value of shares repurchased minus the value of new stock issued) plus another $6.8 billion in stock dividends. Big-bank stockholders are getting 41 times more in just three months than workers have been promised in one-time bonuses and pay raises this year. The tax cuts have fueled a surge in buybacks, with corporations announcing $457 billion in new planned stock buybacks since the tax law was passed. In May alone, a record-breaking $200 billion on stock buybacks were announced. 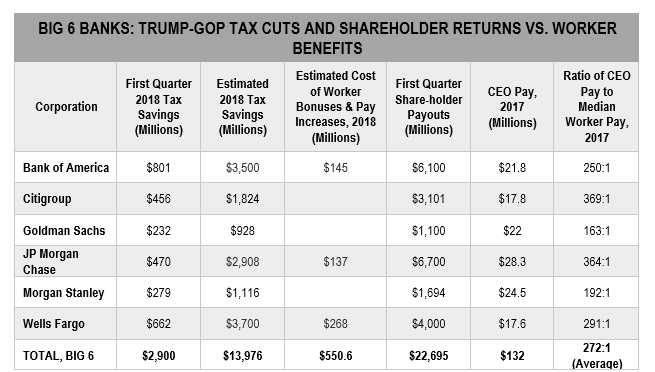 Dividends and buybacks overwhelmingly benefit the wealthy, including CEOs, because rich people own most corporate stock: the wealthiest 10% of American households own 84% of all shares, the top 1% own 40%. Buybacks also embellish CEOs job performance by reducing the number of shares outstanding, leading to higher earnings per share—Wall Street’s favorite measure of success—without the burdensome necessity of increasing profits. Buybacks can also artificially inflate share prices, making corporate executives and other shareholders even wealthier and increasing inequality even more.

Among big banks, there’s already a huge discrepancy between bloated executive compensation and the pay of everyday workers. Last year, the CEOs of the Big 6 banks enjoyed annual pay packages averaging a hefty $22 million. The average ratio of CEO pay to median worker pay among the Big 6 was 272 to 1.

The banks’ lopsided tax-cut payouts to executives and investors will only widen the economic gap with most employees. And it’s not just happening in the financial industry: the structure of the Trump-GOP tax cuts, and the way corporations are using their resulting tax savings, are worsening economic inequality across America.

"Contrary to the rosy projections of the new tax law’s authors, corporate tax cuts are not “trickling down” to workers but instead are pooling at the top benefiting CEOs and the richest 1%. That is sure to continue in future years—you can bank on it." – Frank Clemente, ATF Executive Director

For more information on how the big banks and other corporations are using their tax cuts, visit https://americansfortaxfairness.org/trumptaxcuttruths/.

A Pandemic Is No Time for Precarious Work

For National Doctors' Day, Forget the Donuts. Can We Get Some Damn Masks?

Following the rabid lead of anti-science evangelicals, the pastor of a Tampa megachurch who says his church will only close when the Rapture comes was arrested for risking his followers' and many more lives by defiantly leading two packed Sunday services. After busing congregants to his church - allegedly fitted with magic virus-killing gizmos - Howard-Browne urged them to shake hands and vowed their toilet paper would multiply if they trust in God. "Are you with me?" he asked. Actually, not.
Read More...
END_OF_DOCUMENT_TOKEN_TO_BE_REPLACED