The groups are challenging the U.S. Army Corps of Engineers’ plan to extend through 2025 deadly discharges from the lake into the Caloosahatchee and St. Lucie rivers. The discharges harm protected marine species like sea turtles and Florida manatees and trigger toxic algae blooms that limit use of waterways and cripple local economies.

Today’s notice gives the Army Corps, the U.S. Fish and Wildlife Service and the National Marine Fisheries Service 60 days to respond to the claims submitted by the Center for Biological Diversity, Calusa Waterkeeper and Waterkeeper Alliance.

“Even as the Red Tide wreaks havoc, the Corps keeps treating Florida’s rivers like a toilet,” said Jaclyn Lopez, Florida director for the Center for Biological Diversity. “Year after year our waterways are polluted and the health and livelihoods of Floridians are threatened. Florida’s residents, from fisherman to manatee, deserve better.”

Before approving long-term schedules for discharges from Lake Okeechobee, the Corps is supposed to work with scientists from the Fish and Wildlife Service and National Marine Fisheries Service to assess risks to plants and animals protected under the Endangered Species Act. But the agencies have ignored the impacts of the algal blooms and failed to consider how the ongoing damage would harm populations of manatees, sea turtles, smalltooth sawfish and coral for the next seven years.

“LORS is responsible for discharges that impact over 200,000 acres of habitat for the endangered smalltooth sawfish,” said John Cassani, Calusa waterkeeper. “The Caloosahatchee is important pupping habitat for sawfish, and the Corps’ discharges threaten to harm this vital nursery.”

It has been well documented that the current schedule for discharges from the lake causes harm to the rivers, their estuaries and marine animals. The harmful discharges are managed by the Corps to prioritize agricultural needs. The releases, which include algae and nutrients that are allowed to accumulate in the lake, cause significant harm to water quality and wildlife.

“Government agencies are supposed to uphold and enforce our nation’s laws,” explained Waterkeeper Alliance executive director Marc Yaggi. “Sadly, the Army Corps has been violating the very laws it is sworn to uphold, causing incalculable damage to endangered and threatened species like manatees and sea turtles that rely on clean healthy waterways and coasts to survive. We intend to force the Trump administration to immediately end its dereliction of duty and to protect threatened marine life and coastal economies from the impacts of harmful algal blooms before it's too late.”

Past analyses of the Corps’ schedule for the lake failed to consider the long-term impacts of high volume discharges beyond three years, discounted the effects of harmful algal blooms and did not consider habitat impacts triggered by climate change.

In 2008 the Corps updated its plan for managing the discharges with the goal of lowering the risk of damage to the Herbert Hoover Dam, which retains the lake. But the plan was supposed to be reconfigured within three years to incorporate the impacts of structural improvements to the dike and water quality upgrades projected to come from the Comprehensive Everglades Restoration Plan.

The dike repairs are behind schedule, the Everglades plan has not been completed and toxic algae blooms continue to kill countless marine animals. Meanwhile the Corps has opted to simply extend the current water-management plan through 2025 without assessing the harm to protected wildlife and water quality. 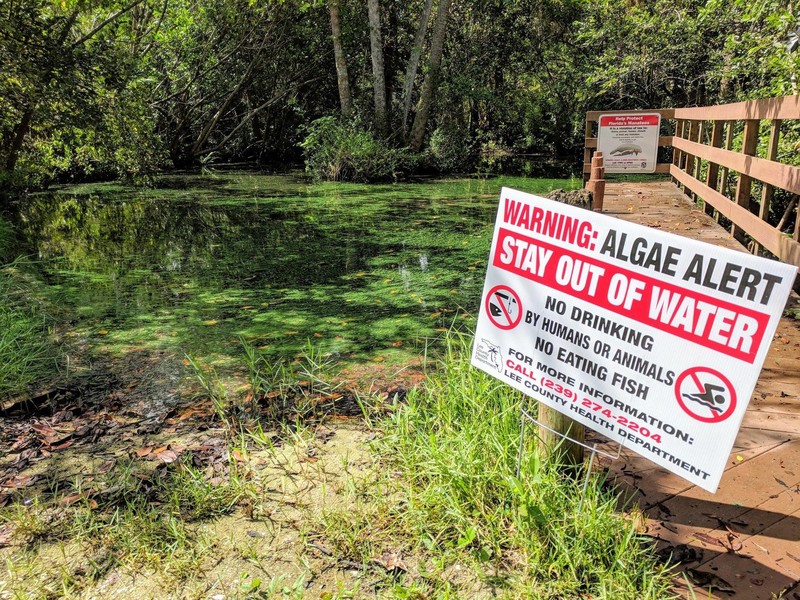 Whoa. The consensus on that so-called debate: A "shit show" featuring a rabid, abusive, lying, bleach-injecting tax cheat who declined to condemn white supremacists because he is one. He did, however, declare himself the winner in a magic act of pre-lying hours before the fact, telling his supporters the debate "will go down in HISTORY." And he won praise for his " amazing" win from Borat and the Kazakh people; they urged, "Vote for Premier Trump or you will be crushed.”
Read More...
END_OF_DOCUMENT_TOKEN_TO_BE_REPLACED