The 27-page report, “‘Why Are You Keeping Me Here?’: Unaccompanied Children Detained in Greece,” documents arbitrary and prolonged detention of children in violation of international and Greek law. Children are held in unsanitary conditions, sometimes with unrelated adults, in police stations and detention centers where they have little access to basic care and services. The report is based on interviews with 42 children who were or had been detained, as well as visits to two police stations and two detention centers in mainland Greece.

What Greece Should Do:

End the unjustified detention of unaccompanied children and ensure they have suitable, sufficient accommodation.
Seek and use designated EU funding to provide alternatives to detention.

What the EU and EU Member States Should Do:

Accelerate the transfer of unaccompanied children from Greece to other EU countries.
“Greece says it has to detain children for their own protection, but being locked up in cramped and filthy cells is the last thing these kids need,” said Rebecca Riddell, Europe fellow at Human Rights Watch. “We’re talking about kids who are all alone and who fled their countries, often to escape violence. Greece and the EU should do a better job giving these vulnerable children the care they need and deserve.”
Greek authorities registered more than 3,300 unaccompanied asylum-seeking and other migrant children arriving in Greece in the first seven months of 2016. While unaccompanied children should be referred to safe accommodation, Greece has a chronic shortage of space and detains children in so-called protective custody while they await space in the overburdened shelter system.

Greek law says unaccompanied children may be detained for 25 days pending transfer to a shelter, and for up to 45 days in very limited cases. Human Rights Watch found that children were often detained for longer than these already excessive periods, with an average stay of 40 days. “Javed S.,” a 16-year-old boy from Afghanistan who had been in police custody for 52 days, said, “The situation is very bad…I feel alone here, far from my family, from my friends…I need to get out of this hell.” Greek police detained 161 unaccompanied children in the first six months of 2016.

Children face extremely poor conditions. In some cases, they were made to live and sleep in overcrowded, filthy, bug- and vermin-infested cells, sometimes without mattresses, and were deprived of appropriate sanitation, hygiene, and privacy. Some were held with adults even though this increases the risk of abuse and sexual violence and violates international and national laws requiring the separation of adults from children in detention. 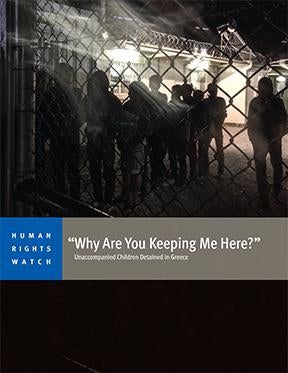 “Why Are You Keeping Me Here?”

“I swear to God, I sleep next to rats,” a 15-year-old Algerian boy detained at the Amygdaleza detention center told us. Another boy, 17-year-old “Nawaz S.” said he was detained with unrelated adults: “I could not feel safe, because the other people [in the cell] were doing drugs… When they were fighting, of course I was scared and I couldn't sleep.”
Children also face ill-treatment by police. While most of the children interviewed did not report abuse, four children said they had been slapped or humiliated by police officers.
Children in police custody often have little or no access to counseling, information, and legal aid. Only one of the four facilities Human Rights Watch visited offered access to psychological care. None of the children we interviewed in police custody had been given access to an interpreter in order to speak to the police, and only one of the four facilities offered any access to books and games.
Many had fled violence and armed conflict, including in Syria, Afghanistan, and Iraq. “Wasim T.,” a 16-year-old Kurdish boy from Iraq who was locked in a police cell, said he fled after Islamic State fighters (also known as ISIS) captured his hometown of Mosul and executed his father. The children traveled on their own to Europe or became separated from their families in transit.
Greece’s failure to provide accommodation for unaccompanied migrant children is a chronic problem. Greek authorities have acknowledged the issue, but done far too little to effectively address the lack of accommodation.

The problem has grown more acute after significant arrivals by sea to Greek islands – more than 160,000 people arrived in the first seven months of 2016 – and border closures to the north, which have effectively trapped asylum seekers and migrants in Greece. According to the National Center for Social Solidarity, Greece has only 800 shelter spaces for unaccompanied children. As of August 11, 2016, all facilities were full with 1,472 requests for placement pending.

The EU’s emergency relocation plan, adopted in September 2015 and intended to move 66,400 asylum seekers from Greece to other EU countries, has provided little relief. As of September 2, only 49 unaccompanied children had been relocated. On an August visit to Greece, the UN High Commissioner for Refugees, Filippo Grandi, emphasized the need for EU member states to accelerate transfer of asylum seekers out of Greece, through family reunification and relocation. EU member states rejected a plea from Greece in June to make all unaccompanied children eligible for relocation, regardless of nationality.

Under international law, binding European directives, and national law, detention of unaccompanied children can be used only as a measure of last resort, in exceptional circumstances, and for the shortest appropriate period. The UN Committee on the Rights of the Child has said that children should not be detained solely because of their immigration status or on the basis of being unaccompanied.
The Greek government should ensure that there are sufficient and suitable alternatives to detention and end the unjustified detention of unaccompanied children. The European Commission should allocate earmarked emergency funding for placements for unaccompanied children in Greece. Greece and other EU member states should intensify efforts to transfer unaccompanied asylum-seeking children out of Greece, both under the EU relocation plan and through reunification with family members living in other EU countries.
“Greek authorities face real challenges because of the significant number of arrivals, but these don’t absolve Greece of its obligation to protect children who have fled violence, endured traumatic journeys, and are alone,” Riddell said. “If EU member states are serious about protecting vulnerable children, they should urgently move these children out of Greece and into member states.”
Quotes from the report:

“It is hard when I think about how many days I’ve been inside. There’s nothing to do. The only thing we do is think, talk to each other, and sleep. There’s no TV, no books, and the wall is black from the dirt…. [T]he water is too cold and we can’t shower.” – “Wasim T.,” a 16-year-old Kurdish boy who said he fled Mosul after his father was executed by ISIS, interviewed at a police station in Filiates.

“I had just woken up. I didn't have time to wash my face, so I was walking sleepily, and the police officer came and slapped me so hard it blinded me.” – “Roda A.,” a 17-year-old Syrian boy interviewed at the Paranesti detention center, said an officer slapped him in the course of hurrying him to a doctor’s appointment.
“We were just joking around in the cell. The police pulled me out, put me in a chair, and handcuffed my hands behind my back…. He has all the power. He could do anything to me. All of us, we’re each alone here. We don’t have anyone.” – “Adi S.,” a 17-year-old boy from Pakistan interviewed at the Amygdaleza detention center, said an officer scared and humiliated him in front of other detainees.
“I could not feel safe, because the other people [in the cell] were doing drugs…Police were sleeping, doing whatever they wanted. Fights would break out every few hours. The police just came and watched the fights and then left…. When they were fighting, of course I was scared and I couldn't sleep.” – “Nawaz S.,” a 17-year-old boy from Pakistan, interviewed at the Amygdaleza detention center where he said he was transferred after being detained for two months in a crowded police station cell along with adults.
###


Human Rights Watch is one of the world's leading independent organizations dedicated to defending and protecting human rights. By focusing international attention where human rights are violated, we give voice to the oppressed and hold oppressors accountable for their crimes. Our rigorous, objective investigations and strategic, targeted advocacy build intense pressure for action and raise the cost of human rights abuse. For 30 years, Human Rights Watch has worked tenaciously to lay the legal and moral groundwork for deep-rooted change and has fought to bring greater justice and security to people around the world.

The world turns away, but "there is fuel in the air" as a record number of Palestinians in and around Jerusalem lose their homes, either pitilessly razed by bulldozers or seized by jeering Israeli settlers with the "law" of occupation on their side. For those left destitute, it's "an early death," a brutal uprooting by a country that "throws us out like garbage" when they ask only to live: "I need them to let me live, with my family, in my house. It's a simple request."
Read More...
END_OF_DOCUMENT_TOKEN_TO_BE_REPLACED