SUBSCRIBE DONATE
Published on
Friday, December 04, 2020
by
Fairness and Accuracy In Reporting (FAIR)

If more people reap the benefits of student loan forgiveness, allowing them to enjoy freer lives with more chances for economic advancement, then other progressive and social democratic policies are going to be more appealing.

The idea of canceling student debt, once championed by Occupy Wall Street and treated as a pipe dream when advocated by Bernie Sanders and Elizabeth Warren is now thought to be viable, and progressives are pushing for it. (Photo: Shutterstock) 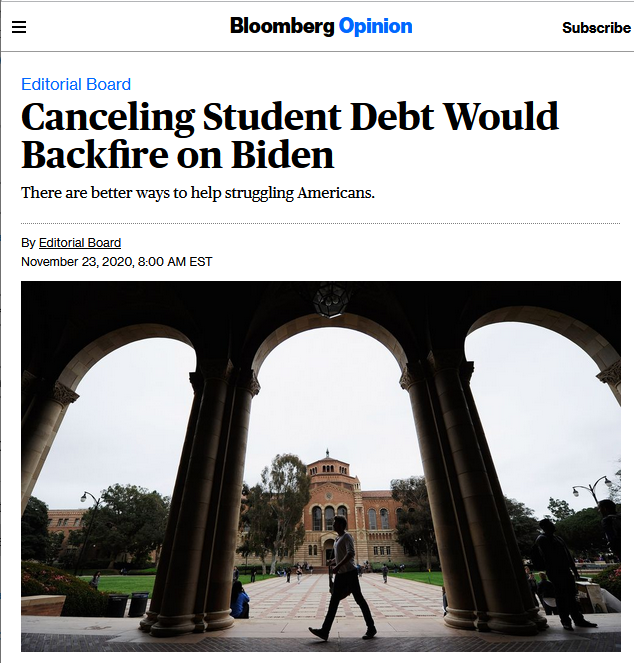 Progressives who have had their doubts about President-elect Joe Biden’s economic policies might get thrown a bone, with Democratic leaders noting that Biden could erase student debt without congressional approval (CNBC, 11/16/20).

The idea of canceling student debt, once championed by Occupy Wall Street and treated as a pipe dream when advocated by Bernie Sanders and Elizabeth Warren (FAIR.org, 7/25/19), is now thought to be viable, and progressives are pushing for it. At the same time, business journalists are churning out reasons why relieving student debt is bad: It’s unfair to people who don’t have debt, and it wouldn’t help the economy that much.

The business press isn’t blind to the debt problem; even the Wall Street Journal (6/7/19) labels the ballooning debt a “crisis,” saying, “Borrowers currently owe more than $1.5 trillion in student loans,” with 2 million people in default over the course of six years. It added that the “federal government now acknowledges that taxpayers stand to lose $31.5 billion on the program over the next decade.”

That’s certainly alarming, but now that there’s an incoming Democratic administration with an emboldened left flank in the party, the business press is wary of bold action. Bloomberg (11/23/20) flipped the script on leftists who believe student debt cancellation would pave the way toward more social democracy, saying that student loan relief helps the relatively well-off and leaves out the poor. David Nicklaus at the St. Louis Post-Dispatch (11/23/20) also said that canceling student debt wouldn’t help “laid-off hotel and restaurant workers,” and that people who already paid off their debts would feel shafted. Fox Business (11/23/20) cited a study saying “that forgiving all student loan debt would provide just a small bump to the economy,” increasing “cash flow by about $90 billion per year, even though it would cost close to $1.7 trillion.”

The business media’s fairness argument against forgiving student debts is made in bad faith: Canceling student debt doesn’t negate other policies that would benefit blue-collar workers or the unemployed. Sanders voters who want to forgive student debt also support increased jobless benefits and stimulus payouts across the board, as well as universal healthcare, which would untether medical costs from employment. 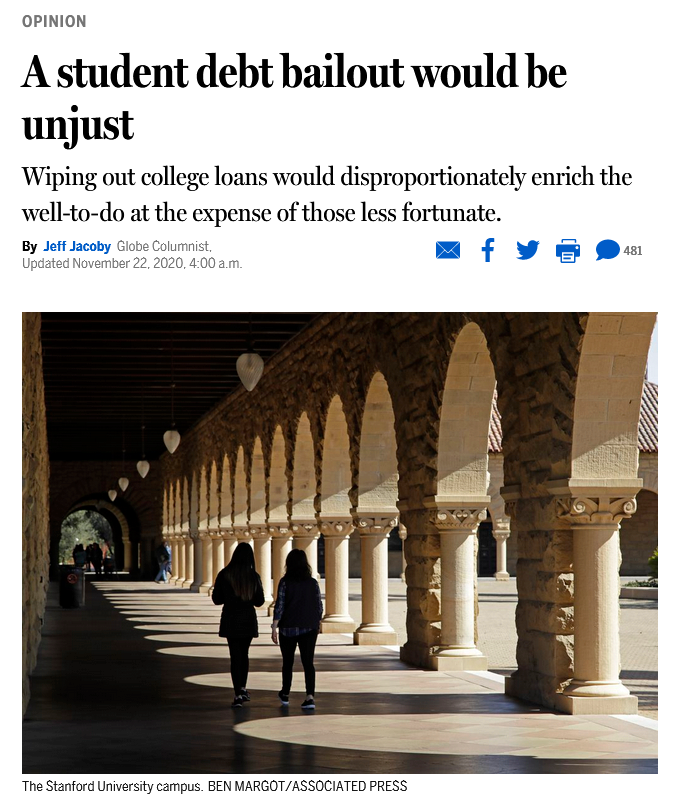 Imagine three 30-year-old neighbors, each of whom earns $50,000 — a construction worker who never went to college, a legal secretary with a two-year associate’s degree and $2,000 in remaining student debt, and a software engineer who attended a four-year college and graduate school and still has $50,000 in unpaid loans. A bailout that erased $50,000 of student debt would give nothing to one of the neighbors, a modest $2,000 to the second, and a $50,000 bonanza to the third.

Jacoby would have us believe that he feels the workers’ pain, but there’s nothing about student loan forgiveness that would block progressives from pushing for things that would address other economic concerns. On the contrary, progressives are also backing the PRO Act, which would make it easier for the first two workers in Jacoby’s example to unionize, and thus achieve higher wages, more job security and better benefits (Washington Post, 2/6/20). Would Jacoby support such a measure for blue-collar workers? Given that the US Chamber of Commerce opposes it, it’s unlikely that the business-friendly pundit would give it his blessing.

The talking point that student loan forgiveness wouldn’t help the economy doesn’t hold much water either. When Fox Business compares the $1.7 trillion “cost” of the forgiving student debt to the “cash flow” of $90 billion, it’s essentially talking about the same number: The cost of forgiving student debt (92% of which is held by the federal government) is basically money that Washington could decide not to collect over the course of years or decades, and that’s the money that forgiveness would leave to be spent in the economy. But as Current Affairs (2/7/20) pointed out, the nominal amount of debt is not what forgiveness would cost, since no one expects all student loan to be eventually paid back; some will be “forgiven” at the death of the debtors, who will have lived a lifetime under a debt burden with no gain to the federal government.

NPR (11/25/19) reported, back when the notion was more hypothetical, that many economists believed that such loan forgiveness would increase the buying power of those with student debts. And Business Insider (1/1/20) pointed out that the business press is fond of complaining that millennials are hurting industries because they spend less than their parents did a generation ago. Citing soaring student debt along with the high cost of housing and health care, Business Insider said, “it should come as no surprise that millennials didn’t enjoy being accused of destroying things they simply couldn’t afford.”

The business site The Street (11/21/20) offered more insight into the business sector’s trepidation, fuming,  “A big cancellation of student debt might convince people that such forgiveness would become a regular occurrence.”

That is the idea, isn’t it? A great many backers of student loan forgiveness are in favor of reducing all sorts of debt; Astra Taylor, an organizer with Debt Collective, told Democracy Now! (11/20/20), “We need to couple relief programs with debt cancellation,” adding that “there are calls emanating from all over to cancel medical debt, cancel rent.”

Economic progressives have a bigger message: A simple college education shouldn’t mean a life of debt slavery, basic medical expenses shouldn’t lead to bankruptcy, public institutions deserve to be well-funded, and a home shouldn’t absorb the bulk of one’s income. Student loan forgiveness, if enacted properly and swiftly, would erode the economistic consensus that austerity is the only option.

The opponents of student loan forgiveness aren’t afraid that it won’t work; they’re afraid that it will work. If more people reap the benefits of student loan forgiveness, allowing them to enjoy freer lives with more chances for economic advancement, then other progressive and social democratic policies are going to be more appealing. Medicare for All, rent control, higher taxes on the rich to fund public schools, and union membership will become more popular, and more candidates like Rep. Alexandria Ocasio-Cortez will get elected to Congress.

Student loan forgiveness would not be a cure-all for the inequities of US society. But it’s a doable thing that can lead to other progressive economic reforms down the road, at a time when the pandemic and four brutal years of the Trump regime make these more desperately needed than ever. Let’s hope a Biden administration doesn’t listen to these bad-faith critics.

'If This Is a Trial Balloon... Hopefully It Fails': Biden Warned Against Naming Corporate-Tied Michael Barr as Top Bank Cop

Rev. John Dear
'I Never Thought I'd Live to See This Day': The Beginning of the End for Nuclear Weapons...
END_OF_DOCUMENT_TOKEN_TO_BE_REPLACED
Connect With Us

END_OF_DOCUMENT_TOKEN_TO_BE_REPLACED

The veterans of the Great Capitol Insurrection, it seems, are not faring well. Scores of rioters have been arrested, many moronically incriminating themselves en route; investigations are finding the Trump campaign supplied untold millions to the pre-riot rally, often via shell companies and dark money that could constitute illegal money laundering; and weary Americans breathlessly await the spectacle of a Trump impeachment trial for what Chuck Schumer just called inciting "the erection."
Read More...
END_OF_DOCUMENT_TOKEN_TO_BE_REPLACED