SUBSCRIBE DONATE
Published on
Tuesday, October 06, 2020
by
The Conversation

A continuation of dehumanizing and dangerous conditions on the border, with less public scrutiny than ever.

Members of a U.S.-bound migrant migrant caravan from Honduras have been detained in Guatemala and deported before they could reach Mexico. Though their journey was cut short, the formation of a new caravan reveals that – as in 2018 and 2019 – Central Americans are still fleeing violence, hunger and climate change en masse.

The crisis at the U.S.-Mexico border also persists despite the coronavirus drawing media attention toward other matters. As a scholar of Mexican migration, I have watched the pandemic create new hardships for immigrants while giving the Trump administration leeway to impose further restrictions on the rights of migrants and asylum-seekers.

The result is a continuation of dehumanizing and dangerous conditions on the border, with less public scrutiny than ever.

Crisis at the border

During my research for a 2019 documentary, “Waylaid in Tijuana,” I observed firsthand the difficult conditions facing thousands of migrants and asylum-seekers who were stranded at the U.S.-Mexico border well before the pandemic.

Under international and domestic law, the United States must offer asylum to people with a “well-founded fear” of persecution based on their political beliefs, racial or ethnic background, religion or other special characteristics that make them a target for violence.

But in April 2018, the Trump administration began “metering” asylum-seekers by requiring that they get on a waiting list for their initial appointment with U.S. officials. By August 2019, 25,000 people were on the list, mostly in Tijuana. In February 2020, just before the global pandemic was declared, 15,000 people were still waiting.

Nine months after metering began, the Trump administration introduced the Migration Protection Protocols, which require asylum-seekers who pass their initial interview to return to Mexico to wait for each subsequent court hearing. By March 2020, over 65,000 asylum-seekers had been returned to Mexico, mostly through ports of entry in Texas.

Under pressure from the Trump administration, the Mexican government acceded to this policy, giving asylum-seekers the right to wait for their interview in Mexico. Migrants in the caravans that arrived in late 2018 and early 2019 were also given a special work permit. 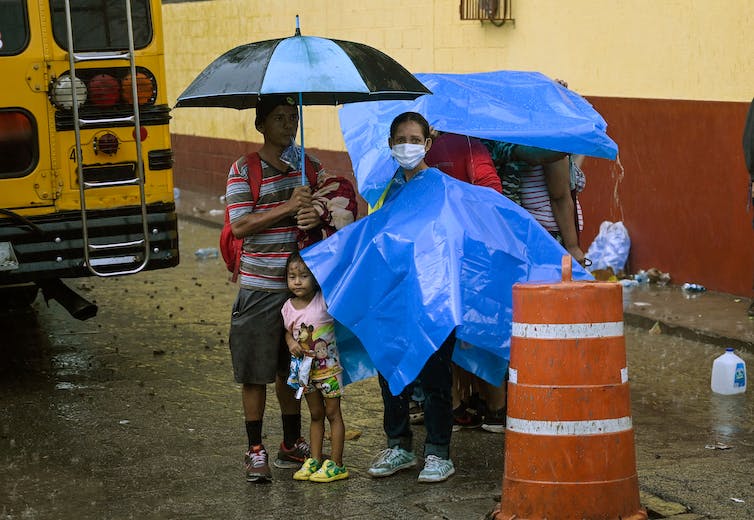 But the Mexican government has since drastically curtailed these permits, and today’s migrants receive almost no government support. The lucky ones find food and lodging at a church-run migrant shelter, an informal job waiting tables or working construction and access to health care and legal counsel through local or U.S.-based nonprofit organizations.

Most migrants are not so lucky. Shelters cannot keep up with the demand, leaving thousands on the streets or in tent camps with no plumbing or electricity, especially along the Texas border. Asylum-seekers outside the shelters rarely have access to social assistance or legal counsel.

Asylum-seekers are also targeted by criminals and local police for extortion, mugging, kidnapping and assault – adding another layer of trauma to the violence suffered back home and along their journey. During the interviews with asylum-seekers conducted for “Waylaid in Tijuana,” my colleagues and I could see the fear and anxiety in their body language.

Barred by the pandemic

These two policies – the metering system and the Migration Protection Protocols – had vastly reduced Central American migrants’ chances of gaining asylum in the U.S. even before the pandemic. As of August 2020, only 570 of the 44,000 asylum-seekers sent back to Mexico whose cases had been decided were granted refuge in the U.S. That’s an approval rate of 1.3%, compared with 21% in 2018 for asylum-seekers from El Salvador, Honduras and Guatemala.

The pandemic has now enabled the Trump administration to effectively end asylum as an avenue for Central Americans to legally enter the United States.

In March 2020 the Department of Homeland Security closed the waiting lists for asylum interviews and suspended asylum hearings. The Trump administration also invoked Title 42, a little-used rule of the Centers for Disease Control and Prevention intended to prevent the spread of infectious disease, to expel all migrants who cross the U.S.-Mexico border immediately and without the hearing to which many of them would normally be entitled.

Under this rule, U.S. Customs and Border Patrol has turned away more than 147,000 people since March, over the objections of top scientists. Most of the migrants, including non-Mexicans, are stuck in Mexico.

[Expertise in your inbox. Sign up for The Conversation’s newsletter and get expert takes on today’s news, every day.]

That puts even more pressure on Mexico’s already overextended shelters, many of which stopped taking new residents or closed down completely when the pandemic hit.

And with much of Mexico’s economy on lockdown, jobs are nearly impossible to find. A recent International Labor Organization report finds Mexico lost 10.4 million informal jobs during the first two months of the pandemic, particularly in areas like hospitality and construction that used to employ migrants. 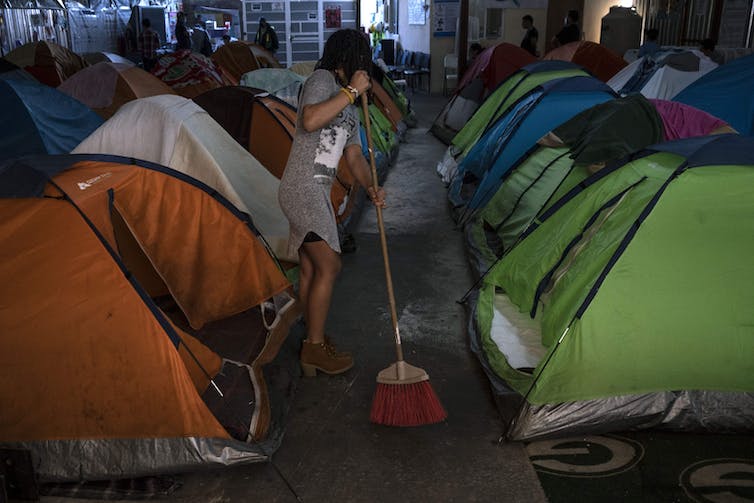 Despite the obvious health risks, U.S. Customs and Border Patrol continues to require that migrants check in regularly at ports of entry to keep their asylum cases active. Yet pandemic restrictions mean U.S.-based aid workers and lawyers are unable to cross the border to help their clients.

Mexico, like the U.S., is struggling to contain COVID-19; over 81,000 people have died of the disease. Many asylum-seekers waiting at the border cannot practice social distancing in crowded encampments or apartments and have nowhere to turn if they get sick.

Hunger, sickness, violence and generally dangerous conditions in Central America mean many asylum-seekers will brave the obvious health risks at the U.S.-Mexico border rather than return home. And others, like the migrants in the new Honduran caravan, will continue to flee.

The U.S. asylum system has been crippled by politics and the pandemic while the humanitarian crisis at the border continues.

Katrina Burgess is Associate Professor of Political Economy. Before joining The Fletcher School of Law and Diplomacy, she taught at Syracuse (the Maxwell School), Brown, UCLA, and the Autonomous Technological Institute of Mexico (ITAM). She is author of Parties and Unions in the New Global Economy, which won the 2006 Outstanding Book Award for the best publication on labor issues granted by the Section on Labor Studies and Class Relations of the Latin American Studies Association, and co-editor with Abraham F. Lowenthal of The California-Mexico Connection.

Michael Hiltzik
Biden's Plan to Waive Vaccine Patents Is Good News, but Not Enough to Beat the Pandemic Within a Privatized Pharmaceutical System
END_OF_DOCUMENT_TOKEN_TO_BE_REPLACED
Connect With Us

END_OF_DOCUMENT_TOKEN_TO_BE_REPLACED

What else would you expect these convulsive days. This weekend, a massive out-of-control Chinese rocket is hurtling back to Earth while much of the world wonders, with a mix of anxiety and sheesh-what-next resignation, just where it will land and if they'll be under it. Amidst the apocalyptic bingo card gags and forecasts - Partly cloudy with a chance of rocket - many have proposed, in the name of karma, the perfect, poetic landing site. Oh please.
Read More...
END_OF_DOCUMENT_TOKEN_TO_BE_REPLACED