SUBSCRIBE DONATE
Published on
Thursday, April 18, 2019
by
Fairness and Accuracy In Reporting (FAIR)

The phrase is code for elites being pressured in ways they don’t like, and is often a shield against legitimate criticism of corruption or dependence on corporate power

It is often made explicit that “purity test” is merely code for the Democratic base wanting more leftist policies, and being disgruntled with politicians who block them. (Photo: Screenshot)

The Democratic primaries are heating up, and dozens of candidates representing all manner of political positions have entered the ring hoping to be the party’s 2020 presidential nominee. One notable feature of the race is the strong presence of progressive candidates, a sign of the rising influence of the left in the party. 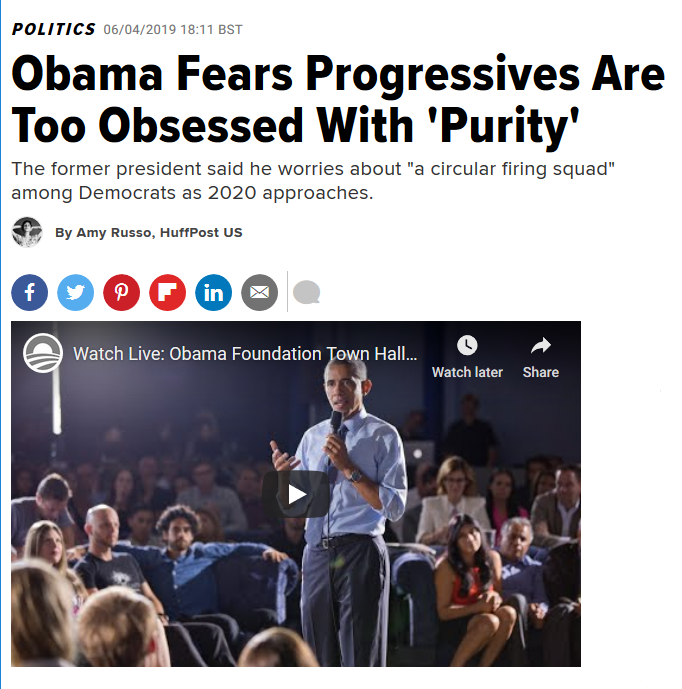 This phenomenon has many in the establishment wing of the party worried. Barack Obama, the most recent Democratic president, recently decried the “purity tests” of the left, which he called an “obsessive” ideological fanaticism that is setting the party up for failure. Obama told an audience in Berlin, Germany (HuffPost, 6/4/19):

One of the things I do worry about sometimes among progressives in the United States…is a certain kind of rigidity where we say, “I’m sorry, this is how it’s going to be,” and then we start sometimes creating what’s called a circular firing squad, where you start shooting at your allies because one of them is straying from purity on the issues, and when that happens, typically the overall effort and movement weakens.

In the political world, the term “purity test” has a very specific meaning, largely used by elites to chastise and attack the left, or to gaslight them into supporting more centrist or right-wing policies.  Boston Globe columnist Joan Vennochi (4/24/17), for example, bemoaned the ideological “activists” infiltrating the Democratic Party, undermining “more pragmatic party leaders everywhere” with their “purity tests.” She highlighted the supposed “danger” in “pushing the party too far to the left and imposing rigid orthodoxy,” warning that they are creating a “one-size party suitable only for zealots.”

An example Vennochi gave of an intolerable and self-defeating purity test was leftists’ pressure on Sen. Elizabeth Warren to change her mind about supporting Trump nominee Ben Carson to lead the Department of Housing and Urban Development. Apparently opposing one of Trump’s most stridently right-wing appointees constitutes a “demand for ideological purity.” 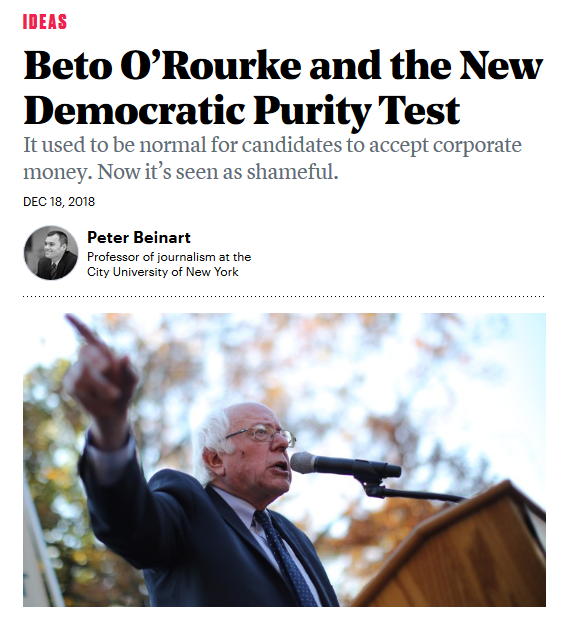 Much has been written about Warren and Sen. Bernie Sanders’ refusal to accept corporate donations for their presidential campaigns, with many outlets (Atlantic, 12/18/18; 3/5/19; Politico, 2/25/19; The Hill, 8/24/17) describing this as a new Democratic “purity test” to establish progressive credentials.

2016 presidential candidate Hillary Clinton (CNBC, 2/5/16) scorned Sanders’ test, claiming, “Under his definition, President Obama is not a progressive because he took donations from Wall Street!” Some might argue that is accurate, particularly as Obama describes himself as a 1980s-style “moderate Republican.”

Another key issue in the primaries is healthcare. A lack of health coverage kills around 45,000 Americans yearly, and hospital bills drive the large majority of bankruptcies in America. Many Democratic candidates, including Warren and Sanders, support a European-style Medicare for All system. But corporate media have been resistant, even hostile.

Writing in the New York Times (3/21/19), Paul Krugman demanded that we “don’t make healthcare a purity test,” warning that Democrats who do not support a single-payer system may not be seen as progressive, or be viewed as a corrupt “shill” for the pharmaceutical industry. According to Krugman, this would be inaccurate. The Washington Post (2/11/19) was more scathing of the Medicare for All “purity test,” attacking the leftist “cranks” using “empty slogans instead of evidence-based policy.”

It is often made explicit that “purity test” is merely code for the Democratic base wanting more leftist policies, and being disgruntled with politicians who block them. The Denver Post (1/31/19) described Democratic presidential candidate John Hickenlooper as a progressive, pragmatic and “moderate problem-solver” in favor of “bipartisanship,” under attack from the “hard-core” left who demand “drastic” change. Their “purity test,” wrote the Post, will destroy a candidate with perhaps the most “credible” chance to beat Trump.

In contrast, behavior or policies imposed on the left from establishment Democrats are rarely if ever framed as a “purity test.” For example, Sanders appointed Briahna Joy Gray as his press secretary, who had previously declared she voted for the Green Party’s Jill Stein in 2016. Instead of this being seen as the party expanding its appeal to third-party voters, it produced a scandal among liberals on social media. For many, it was proof, as they had been saying all along, that Bernie was not a real Democrat—in other words, it was an opportunity for them to excommunicate an ally for being insufficiently orthodox.

On this story, New York magazine (3/20/19) described Sanders’ campaign as an “irrational cult” of “left-wing factionalists” that were attempting to “split the party” by “intentionally misleading” voters. These kind of attacks are not seen as “purity tests,” however.

Neither was the anger generated by the decision of candidates like Sanders, Warren, Sen. Kamala Harris and former Rep. Beto O’Rourke not to attend the AIPAC conference presented as such a test. Nor were corporate media demands that the left embrace Trump’s regime change strategy in Venezuela lest they be accused of supporting a “dictator” (FAIR.org, 3/5/19). When these things are imposed on the base from the top down, they are not framed as purity tests.

Instead, the left is browbeaten and cajoled into supporting business-friendly right-wing Democrats, and told their preferred policies are either unrealistic or unpopular. The Hill (8/24/17) warns us, “If Democrats want to destroy any chances of winning national office, establishing purity tests is the quickest way to do it.”

But this is demonstrably not the case. Seventy-five percent of Americans (and nearly two-thirds of Republicans) support Medicare for all. Three-quarters of the population support higher taxes on the wealthy, while tuition-free public college is popular even among Tea Party supporters. One can make a strong case that these policies would tend to attract rather than repel Trump voters to the Democratic cause.

The dichotomy between credible, pragmatic centrists and the fanatical, inward-looking left demanding ideological purity is a framing generally made in bad faith to shield corporate-backed candidates from criticism. FAIR (2/26/19) has already highlighted the “Republican best friend” trope, where Republicans offer supposedly selfless advice to the left on how to win next time—which turns out to be by doing and saying exactly what the right wants.

“Purity test” is a common talking point for these fake friends. The Associated Press (2/21/19) published an article from a Republican consultant who warned that applying “intense” leftist purity tests to “pragmatic” candidates capable of beating Trump was self-defeating: “As the Democratic presidential candidates move further to the left, it will make President Trump’s path to re-election clearer.”

Meanwhile, writing in Yahoo! News (3/19/19), conservative National Review writer David French claimed it would take a “brave person” to withstand the “attack” of the “vicious,” “scornful” and “toxic” left and their destructive purity tests. Proposing free healthcare, a Green New Deal or other popular left-wing policies would surely lead to Trump’s victory in 2020, he advised Democrats. 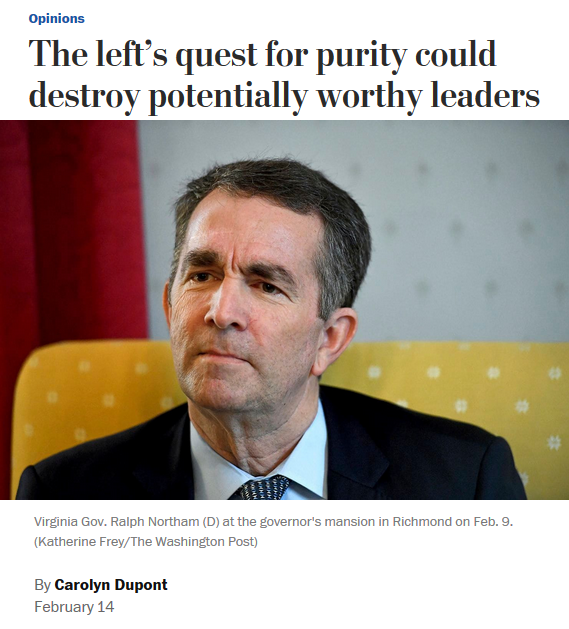 This purity test trope is so blatantly used to defend anyone in power it sometimes stretches credulity to the breaking point. In a Washington Post  op-ed (2/14/19) headlined “The Left’s Quest for Purity Could Destroy Potentially Worthy Leaders,” Carolyn Dupont bemoaned the purity tests of the “rigid, self-righteous and blind” left after Virginia Gov. Ralph Northam was criticized for wearing blackface. The column compared this censure to the guillotines of the French Revolution that killed many “righteous” politicians for “small blemishes on their ideological purity,” describing Northam’s blackface as a “moment of imperfection.” The desire to have policies affecting people’s lives crafted by people who haven’t ritually ridiculed and devalued them, apparently, is another purity test.

The term is used much less frequently in reference to the right wing, but when it is, it is used in the same manner: to describe policies supported by a party’s base that corporate media disagree with. Many outlets (New York Times, 11/23/09; Wall Street Journal, 11/24/09; US News, 12/23/09) described the attempt to get party officials to endorse a ten-point bill, including opposition to abortion and firearms regulation, as a “purity test.”

When you hear the phrase “purity test” in the media, be on the alert. The phrase is code for elites being pressured in ways they don’t like, and is often a shield against legitimate criticism of corruption or dependence on corporate power.

'We Can Shock the World': Kentucky Progressive Charles Booker Considers US Senate Run

END_OF_DOCUMENT_TOKEN_TO_BE_REPLACED

Though they rank close to last nationally in health care, education, vaccines - and may face power shortages - Texas lawmakers are spending this week debating four anti-trans bills, including one to make it illegal/ child abuse to offer gender-affirming, often life-saving, health care to trans kids. One, an aggrieved Kai Shappley, 10, has had it with "asking adults to make good choices,” she said. "Please just listen to me, hear me, try to educate yourselves, try to understand...everybody."
Read More...
END_OF_DOCUMENT_TOKEN_TO_BE_REPLACED