WASHINGTON - Opponents of Formosa Plastics’ plan to build one of the world’s largest plastic plants in St. James Parish, Louisiana have filed a motion seeking a judgment in their lawsuit challenging the project’s federal approval.

The community and conservation organizations asked the federal district judge to invalidate Clean Water Act permits issued by the Army Corps of Engineers last year. The brief says that the massive petrochemical complex deepens environmental racism and burdens a predominantly Black community with dangerous industrial pollution.
The lawsuit, filed by the Center for Biological Diversity along with RISE St. James, Louisiana Bucket Brigade and Healthy Gulf, challenges the Army Corps for violating federal laws in approving the destruction of wetlands, which help protect the region from hurricanes that are intensifying with climate change. The Corps also ignored the water and air impacts of the complex and failed to protect burial sites of enslaved people discovered on the property.

“This is environmental racism. We’re already being poisoned by industrial pollution and Formosa wants to bombard us with more,” said Sharon Lavigne, founder of RISE St. James. “We’re dying slowly. George Floyd died in nine minutes and we’re taking years to die, but it’s killing us just the same. Formosa doesn’t care about the dead buried on its property and it doesn’t seem to care about the living either.”

The motion, which also asks U.S. District Judge Randolph Moss for the chance to present oral arguments, is the court’s first chance to decide the case on its merits. It follows a preliminary injunction filing in July that resulted in Formosa agreeing to forego major construction until February.

“The feds can’t ignore Formosa Plastics’ destruction of wetlands or its pollution of a Black community. They unacceptably rubber-stamped a project that will foul the local environment, fuel the climate crisis and ultimately fill our oceans with more plastic waste,” said Julie Teel Simmonds, a senior attorney at the Center. “Under federal law this community is entitled to full examination of the irreversible damage Formosa Plastics would do.”

The proposed facility would emit 800 tons of toxic air pollution each year, doubling toxic air emissions in St. James Parish. Recent studies have linked exposure to air pollution with higher COVID-19 death rates. That’s one likely factor in why the disease is having a disproportionate impact on Black Americans.

“The Army Corps of Engineers flagrantly failed to protect the people of St. James Parish, and we believe they failed to follow federal law when they issued the permit,” said Anne Rolfes, director of Louisiana Bucket Brigade. “Formosa Plastics’ abuse is disgraceful: The company wants to ram its useless plastic plant down the throats of the Black community in St. James Parish and use our state as its dumping ground. We’re going to court to prevent it from destroying our environment, our culture and our people.”

The project also faces another lawsuit in state court challenging its state air permit. Opponents uncovered records of unmarked graves of enslaved people on the site and have urged Formosa Plastics to protect them and for parish officials to reconsider their approval of the project.

Formosa Plastics’ massive proposed petrochemical complex would include 10 chemical manufacturing plants and numerous support facilities, including a heavy haul road across a major levee on the Mississippi River. The site spans 2,500 acres just one mile from an elementary school. By turning fracked gas into the building blocks for a massive amount of single-use packaging and other throwaway plastic products, the project would worsen climate change and the ocean plastic pollution crisis.

Last year Formosa Plastics agreed to pay a record $50 million in cleanup and restoration costs to settle a civil lawsuit after its Point Comfort plant discharged billions of plastic pellets into Texas waterways over many years. That settlement included a commitment to zero future plastic discharges from the Texas plant, a standard that has not been applied to its plant in Louisiana. 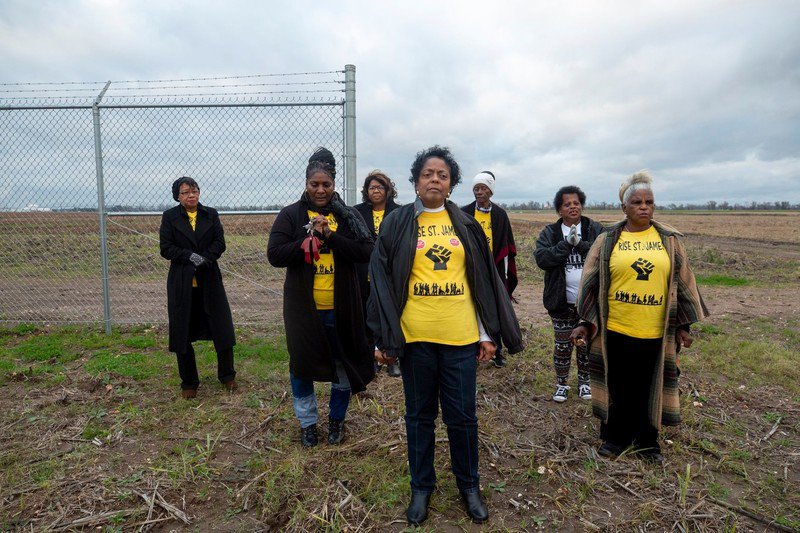 END_OF_DOCUMENT_TOKEN_TO_BE_REPLACED

This week brought harrowing proof of the racism still befouling American "criminal justice": Long after the fact, we find Colorado police had no reason to stop, never mind kill, Elijah McClain; a New York grand jury declined to bring charges against seven cops for killing Daniel Prude for being mentally ill; Ahmaud Arbery's mother sued three thugs who killed her son for jogging while black and the cops who covered it up. Each time, activists say, "The system did exactly what it was meant to do.”
Read More...
END_OF_DOCUMENT_TOKEN_TO_BE_REPLACED