SUBSCRIBE DONATE
Published on
Friday, September 25, 2020
by
The Progressive

Why We Should All Be Reading Howard Zinn Right Now

As the historian aptly predicted, who is on the Supreme Court is not as important as what the American people demand.

If we had more Zinn in our schools, at least as a counterpoint to the patriotic view of the United States that still dominates, we would know more about what ties us together as a nation, and spend less energy on our differences. (Photo by Lawrence K. Ho/Los Angeles Times via Getty Images)

When Ruth Bader Ginsburg died on September 18, waves of anxiety rippled through already nervous Democratic circles. The loss of such a monumental figure was sad enough, but there was little time to grieve.

As Zinn wrote, “It would be naive to depend on the Supreme Court to defend the rights of poor people, women, people of color, dissenters of all kinds.”

That’s because Republican leaders, most notably Senate Majority Leader Mitch McConnell, pounced on the opportunity presented by Ginsburg’s death to rush a Supreme Court nominee through before the next President’s term, and possibly before the November election.

It’s upsetting that Ginsburg died, as many of us felt connected to her through her work and her engaging public persona. But that’s not the worst of it. The worst part is the way her death immediately seemed to inspire a ghoulish delight in McConnell and other Republicans, such as Senator Ted Cruz of Texas.

Cruz made the rounds of the Sunday political talk shows on September 20, defending Trump’s right to nominate a replacement for Ginsburg and insisting that when the American people elected Trump (not exactly true) what they  really wanted was to fill the Supreme Court with “principled Constitutionalists.”

And just like that, historian Howard Zinn’s voice of reason—a true balm for our frenetic times—bubbled up on social media. Amid the panic surrounding Ginsburg’s death and the fear that she will be replaced by a far-right ideologue, people began sharing Zinn’s 2005 opinion piece in The Progressive about the Supreme Court.

In the article, Zinn took time to calm the fears surrounding the nomination hearings that had taken place for John Roberts. Roberts sailed through those hearings, of course, as Zinn knew he would, and is today the Chief Justice of the Supreme Court.

Interestingly enough, Roberts has proven to be less of a “yes man” and something of a thorn in President Trump’s side. 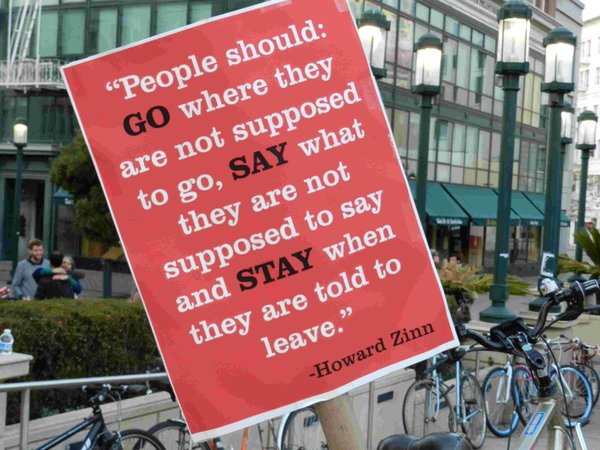 The brilliance of Zinn’s 2005 piece is that he pierces through the drama and angst surrounding Roberts’ nomination, reminding readers that, actually, the Supreme Court isn’t all it’s cracked up to be. If you are looking for a revolution, he suggested, don’t get hung up on who is or isn’t getting nominated for the High Court.

In truth,  the supposedly flawless Constitution gets cast aside all the time whenever those in power—from the President to Supreme Court justices—decide to do so, even when they have left-leaning reputations. Zinn lists a number of cases in which this has happened, from the time during World War I when the right to free speech was threatened, to the endless imprisonment of detainees at Guantanamo Bay.

As Zinn wrote, “It would be naive to depend on the Supreme Court to defend the rights of poor people, women, people of color, dissenters of all kinds.” It was this kind of pragmatic clarity that I suspect put Zinn in Trump’s crosshairs last week.

While giving a speech in Washington, D.C., to commemorate Constitution Day, Trump railed against the supposed anti-American indoctrination taking hold in the nation’s public education system.

We must “clear away the twisted web of lies in our schools,” Trump declared, before singling out both The New York Times Magazine’s 1619 Project, which places slavery and its ongoing legacy at the center of American history, and “propaganda tracts” written by Zinn.

If only this rightwing conspiracy theory was even partially true. Most kids will never see a word from Howard Zinn or a page from the 1619 Project while in school, thanks to the outsized influence of history textbooks that are published in states like Texas—often with partisan audiences in mind.

Too often, history is still reduced to a boring slog full of dates and names, with little context or critical thinking. Even the classes that are supposed to offer “rigorous” content, such as the advanced placement U.S. History course many high schoolers now take, have been tweaked to reinforce American Exceptionalism.

I would argue, in fact, that more Zinn would help Midwestern voters choose wisely during this election season. Those of us who live here are being persistently courted by both the Trump and Biden campaigns, with Minnesota, Wisconsin, and Michigan in particular seen as “up for grabs.”

Trump is planning to spend upwards of $14 million in Minnesota alone between now and November 3, according to a recent Miami Herald article. But what will voters get out of it?

If we had more Zinn in our schools, at least as a counterpoint to the patriotic view of the United States that still dominates, we would know more about what ties us together as a nation, and spend less energy on our differences.

We would know, too, that the rights spelled out in the Constitution are of course not guaranteed. Instead, as Zinn wrote in 2005, the rights we think we have as Americans “only come alive when citizens organize, protest, demonstrate, strike, boycott, rebel, and violate the law in order to uphold justice”—no matter who is on the Supreme Court.

Sarah Lahm is a Minneapolis-based writer and former English instructor. She blogs about education at brightlightsmallcity.com.

END_OF_DOCUMENT_TOKEN_TO_BE_REPLACED

With the White House openly giving up on the pandemic, it's fitting the Lincoln Project's put the couple from hell known as Jivanka on massive billboards in Times Square declaring they likewise don't give a shit about you. Their lawyer wants to sue over the "malicious and defamatory" ads; the Project says their indifference and entitlement are real, their "indignant outrage (is) comical," and "their empty threats will not be taken any more seriously than we take Ivanka and Jared."
Read More...
END_OF_DOCUMENT_TOKEN_TO_BE_REPLACED