SUBSCRIBE DONATE
Published on
Wednesday, July 03, 2019
by
Fairness and Accuracy In Reporting (FAIR)

In the case of Buttigieg, the two main sources of funds seem to be the tech industry—and the financial industry, that traditional source of funds for corporate-oriented Democrats

I guess even when you’re trying to pitch your candidate as the unifier of all classes, it’s best not to mention them all. (Photo: Detroit News depiction of Pete Buttigieg at the Miami debates.)

On June 25, the day before the first Democratic presidential debates, Pete Buttigieg’s average in polls of the race stood at 7.0 percent. Today, after the attention and considerable positive media reaction that he got after the debates, he’s surged—to 5.2 percent.

Despite the fact that more people seeing him seems to have resulted in less people liking him, the media narrative about Buttigieg is that his is a campaign on the move—based almost entirely on his fundraising success. CNBC‘s headline (7/1/19) was:

The thread running through these takes is that money, not public support, is what defines a candidate’s “momentum” or “surge,” and determines who is in “eclipse.” Voters are great, seems to be the thinking—but what really counts are donors.

Of course, from a voter’s point of view, what really matters is not how much financial support a candidate is getting, but who they’re getting it from—because those supporters may not have the same interests as the voter. In the case of Buttigieg, the two main sources of funds seem to be the tech industry—in part because of personal ties between the tech world and Buttigieg, who was one of the first 300 users of Facebook (American Prospect, 6/25/19)—and the financial industry, that traditional source of funds for corporate-oriented Democrats. 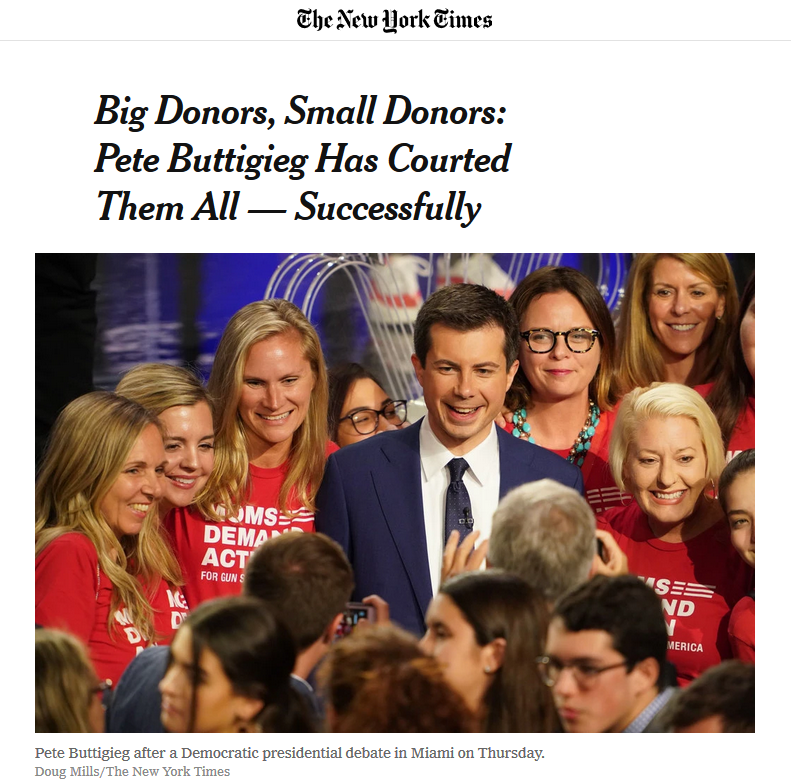 A New York Times headline (6/16/19) told the story: “Wall Street Donors Are Swooning for Mayor Pete. (They Like Biden and Harris, Too.)” “A Harvard graduate and veteran of the McKinsey consultancy, Mr. Buttigieg is fluent in the language of elite New York circles,” the story noted.

But being Wall Street’s favorite is not a good look, the financial industry being deeply unpopular with voters, particularly Democratic ones (Morning Consult, 12/7/18). So Buttigieg is being rebranded as a fundraiser who brings everyone together, rich and not so rich alike. And the Times (7/1/19) is happy to help out with that—with its gushing headline:

The piece, by Reid J. Epstein and Thomas Kaplan, reports:

The piece claims that Buttigieg is relying on both of these revenue streams, the “big” and “small” donors of the headline, in contrast to the other leading candidates:

Mr. Buttigieg’s rivals have mostly favored one fundraising approach or the other. Mr. Biden has concentrated his efforts on the broad network of Obama donors in major cities, but the 76-year-old former vice president hasn’t energized the small-dollar grassroots world. Mr. Sanders and Ms. Warren have sworn off closed-door big-donor events as a political strategy aimed at creating a wider universe of small donors.

This is a lot bigger than the average contributions reported by the other leading Democrats: $30 for Kamala Harris (Politico, 6/29/19), $28 for Elizabeth Warren (New York Times, 4/10/19), $18 for Bernie Sanders (Washington Examiner, 7/2/19). But if you look at the fundraising that Buttigieg has been doing lately, it looks like he’s jumped up to a new league: The Times reports that he “collected $24.8 million from more than 294,000 donors for the three-month period that ended Sunday.” The paper doesn’t do the math, but that’s $84.35 a donor—a big chunk of change for someone who supposedly “has married traditional high-dollar fund-raising with online small donations,” as the Times claims in the very same sentence.

Even that figure probably overstates how much support Buttigieg actually gets from small donors. As the Times (5/30/19) has noted, the fact that the Democratic National Committee has made number of donors a criterion for appearing in debates has led candidates to spend a great deal of money, often via social media ads, to attract small donors, who often contribute much less than they cost to find them—in effect laundering the money gotten from a handful of big money supporters to create the appearance of a broader base of support.

The big donor/small donor piece mentions that through the spring, “the Buttigieg campaign’s combined spending on digital advertising on Facebook and Google ($1.3 million) exceeded that of any other Democratic candidate except Mr. Biden and Ms. Warren.” But it doesn’t refer back to the earlier reporting that suggests that this spending in search of small online donors might not actually be netting any money.

Another Times story that seems to have gone down the memory hole is the piece about Wall Street “swooning” for Buttigieg. The July 1 piece mentions “tech executives in Silicon Valley,” “military veterans” and “educated liberals on the coasts” as sources he’s tapped for funds—but no whisper of his finance industry fans. I guess even when you’re trying to pitch your candidate as the unifier of all classes, it’s best not to mention them all.

57% of US Voters Want Trump Barred From Seeking Office Ever Again: Poll

END_OF_DOCUMENT_TOKEN_TO_BE_REPLACED

Already, a sea change. Joe Biden and Kamala Harris held a searing memorial Tuesday for 400,000 Americans killed by COVID, the first public acknowledgment of the loss inflicted by a sick deadbeat missing the decency gene. "To heal, we must remember," declared Biden, his empathy feeling like water in the desert to many who didn't realize the depth of their thirst - especially after a Michigan nurse sang "Amazing Grace." "I'm not crying - you're crying," said one. "Let the healing begin."
Read More...
END_OF_DOCUMENT_TOKEN_TO_BE_REPLACED