SUBSCRIBE DONATE
Published on
Wednesday, April 17, 2019
by
Fairness and Accuracy In Reporting (FAIR)

Maybe Rich Liberals Don’t Hate Sanders Because They Fear He Can’t Win, But Because They’re Rich

That a network of multi-millionaire and billionaire donors would dislike a candidate who not only rejects their funding, but is actively trying to tax them at rates not seen since 1960, would surely be enough reason to explain why these wealthy elites would want to “stop” his nomination.

Why does the New York Times take rich liberals at their word that their concern with Bernie Sanders is that he would lose to Trump, rather than the obvious, glaring fact that his election would run counter to their interests? 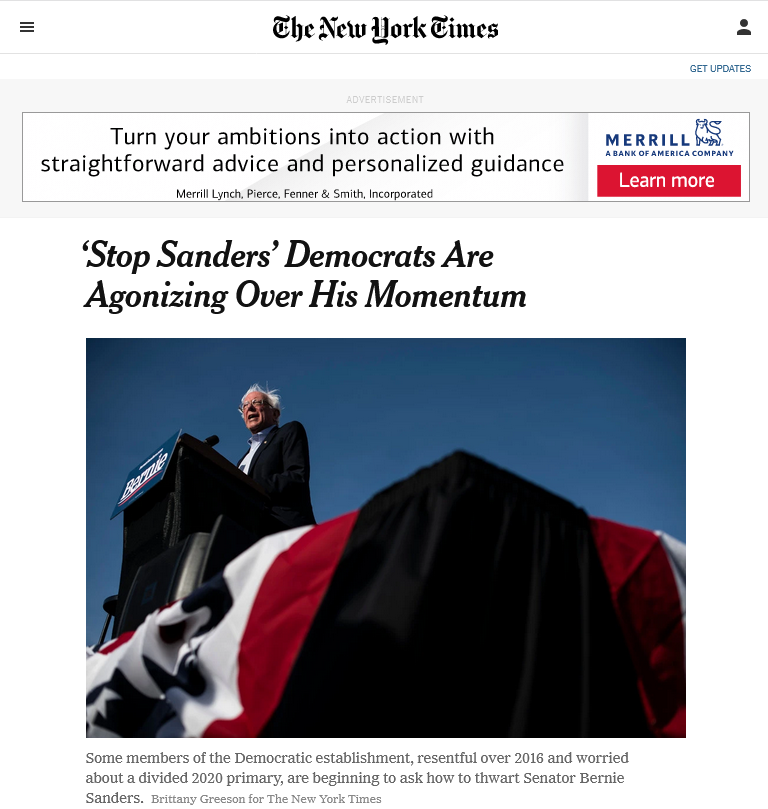 The New York Times (4/16/19) profiled a network of “wealthy liberal donors” who, shockingly, are not fans of Bernie Sanders, who according to the same report has rejected their big-bundler funding and instead opted for small donations. (The Times reported the same day that 84 percent of Sanders’ donations are less than $200; by contrast, only 37 percent of Kamala Harris’ donations are.)

That a network of multi-millionaire and billionaire donors would dislike a candidate who not only rejects their funding, but is actively trying to tax them at rates not seen since 1960, would surely be enough reason to explain why these wealthy elites would want to “stop” his nomination. But not to the credulous New York Times, which takes at face value rich donors’ claim to oppose Sanders because they believe he simply can’t defeat Trump:

Mainstream Democrats are increasingly worried that their effort to defeat President Trump in 2020 could be complicated by Mr. Sanders….

“Some in the party still harbor anger over the 2016 race, when he ran against Hillary Clinton, and his ongoing resistance to becoming a Democrat. But his critics are chiefly motivated by a fear that nominating an avowed socialist would all but ensure Mr. Trump a second term.”

Because it would be unseemly to suggest a group of super-rich hedge fund managers, Hollywood producers and CEOs would dislike a candidate who has made a career out of promising to expropriate the bulk of their wealth, we get a faux pragmatism argument. But polls show Sanders defeating Trump with numbers comparable to any other declared candidate—a fact the New York Times never bothers to mention, letting the idea go unchallenged that “socialist” (!!) Sanders is an electoral liability. The simpler, less altruistic motive is simply never entertained.

It’s a variation on the Inexplicable Republican Best Friend trope FAIR previously documented (2/26/19): Instead of assuming that lifelong conservatives may just prefer more conservative politicians, progressive-bashing GOP pundits are propped up as neutral observers simply looking out for the Democratic Party. Just the same, super-wealthy Democratic donors can’t oppose Sanders because they simply prefer more centrist, pro-Wall Street candidates; they must have a sincere, pragmatic concern he would lose the general election.

Throughout the article, the Times’ Jonathan Martin bizarrely used “mainstream Democrats” and “Democrats” to refer to what is little more than a clique of wealthy donors. “Mainstream Democrats are increasingly worried” he tells us.  “Stopping Mr. Sanders,” he added, “or at least preventing a contentious convention, could prove difficult for Democrats.”

But why would “Democrats” want to “stop Mr. Sanders”? Sanders has a 78 percent favorability rating among Democrats and leads every poll among declared candidates. Martin is, of course, not talking about “Democrats” or “mainstream Democrats”; he’s talking about rich donors. But because it would be vulgar to mention their obvious class interests, they morph into simply “Democrats” without explanation. 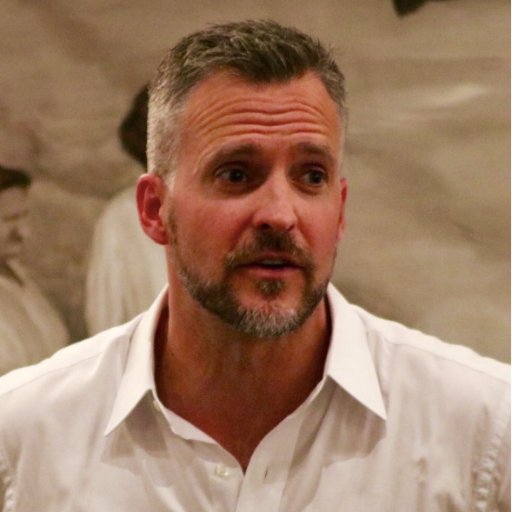 The idea that the interests of millionaire film producer Rufus Gifford—who’s heavily quoted in the article as a stand-in for “Democrats”—would run counter to those of the average voter is glossed over entirely. Why would guy who made Daddy Day Care and Doctor Dolittle 2 be given a voice by the Times instead of, say, literally any random person picked off the street?

Martin then advances the curious construction that super-wealthy donors blatantly conspiring to prevent Sanders from winning the nomination––and even resorting to undemocratic superdelegates at the Democratic National Convention to do so—“plays into the hands” of Sanders:

Mr. Gifford, who has gone public in recent days with his dismay over major Democratic fundraisers remaining on the sidelines, said of Mr. Sanders, “I feel like everything we are doing is playing into his hands.”

But doing out in the open the thing Sanders says Democrats do isn’t “playing into his hands”; it’s true that it affirms his core ideological proposition, that the wealthy have too much political power, but what it mainly is is the wealthy using that power against him.

A similar gambit is used when liberal publications hand-wring that Trump and Rubio openly threatening and planning to invade Venezuela “plays into Maduro’s hands,” and that’s why it’s bad. In fact, it’s bad because the things being discussed, invasion and coup-mongering, are bad things—and they’re not “playing into Maduro’s hands,” they’re actual threats to the sovereignty and lives of those in Venezuela.

Trying to distract attention from the sinister thing happening before everyone’s eyes by commenting that it has some meta, second-order effect of increasing left-wing paranoia is an attempt to smear the left for correctly calling the sky blue.

Rich donor broker and Clinton-hatchet man David Brock, in the very last line of the article, attempts this sleight-of-hand again:

“You can see him reading the headlines now,” Mr. Brock mused: “‘Rich people don’t like me.’”

Simply drawing attention to the fact that a bunch of wealthy donors affirms Sanders primary argument for running doesn’t make it go away. It’s a writer’s trick, and one the New York Times passes off without criticism: LOL Isn’t it ironic we’re doing that bad, evil thing Sanders says rich donors do?

Wait, what? No, it’s just bad, in and of itself. The piece is openly floating a conspiracy of wealthy donors seeking to undermine a democratic process, then laughing it off something that could be mistaken for the actual bad thing it is. Meanwhile, the self-evident fact that rich donors dislike Sanders because he runs counter to their interests is ignored in favor of a child-like fantasy that they oppose him simply because they’re looking out for the best interests of the party.

To the Times, the rich have no ideology, no beliefs, no self interest; this is reserved instead for Sanders “embolden[ed],” “fervent supporters,” whose desire to defeat Trump is presented as at best incidental.

END_OF_DOCUMENT_TOKEN_TO_BE_REPLACED

Stupidity reigns: A year after the deadly fact, the U.S. still has over 70,000 new COVID cases a day thanks to recalcitrant morons like Gym "What-sexual-assault?" Jordan, who spent a House hearing shrieking at Dr. Fauci about "lost liberty" and demanding, "When do Americans get their freedom back?" A weary Fauci: It's not "a freedom thing," it's "a public health thing." It finally took Maxine Waters to quash Jordan with, "Shut your mouth." Amen, auntie.
Read More...
END_OF_DOCUMENT_TOKEN_TO_BE_REPLACED