SUBSCRIBE DONATE
Published on
Tuesday, April 09, 2019
by
The Progressive

Can Democrats win with an economic justice platform?

Power to the People!” blared over the speakers at Navy Pier Festival Hall in Chicago in early March, as U.S. Senator Bernie Sanders walked onstage in front of roughly 12,500 cheering supporters and declared, “We are gathered here tonight to complete the political revolution that we started three years ago.”

With rocking campaign kickoff rallies in Brooklyn and Chicago, more than a million volunteers signed up, and $10 million raised in small-dollar donations within a week of his announcement, Sanders is making a serious bid to be the Democratic candidate who faces Donald Trump in 2020.

After all, he says, his 2016 campaign has already had a lasting impact on the Democratic Party.

“Three years ago, they thought we were kinda crazy and extreme,” Sanders said in Chicago. “Not the case anymore. Three years ago, the ideas that we brought forth here in Illinois and all over the country were rejected by Democrats. Not anymore.” 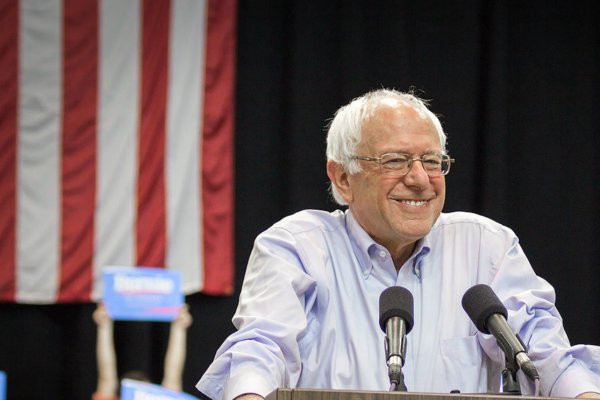 Indeed, the other Democratic candidates in a crowded primary field are beginning to sound a lot like Sanders. Senator Kamala Harris, Democrat of California, is backing a “Medicare for All” universal health care plan. Elizabeth Warren, who has always shared Sanders’s concerns about income inequality, corporate welfare, and wrongdoing by Wall Street, is also pushing the Democratic debates to the left. Even Senator Amy Klobuchar, of Minnesota, a centrist candidate, talks about “getting to universal health care” and invoked the late community organizer and progressive Senator Paul Wellstone in her announcement speech.

It’s a new day for Democrats.

Medicare for All and the Green New Deal have new champions in Congress—including progressive rock star Representative Alexandria Ocasio-Cortez, Democratic Socialist of New York, who was inspired to get into politics by Sanders.

But is Sanders, a seventy-seven-year-old white man, the best face for the new Democratic Party? When Vermont Public Radio reporter Bob Kinzel asked him that question, Sanders replied:

“We have got to look at candidates, you know, not by the color of their skin, not by their sexual orientation or their gender, and not by their age.” Instead, he said, we need to move toward  “a nondiscriminatory society which looks at people based on their abilities, based on what they stand for.”

But surely representation of marginalized people means something in the era of Donald Trump, who was elected partly in a backlash against the nation’s first African American President, with an aggressively misogynist and xenophobic campaign, as a kind of White Man’s Last Stand.

That’s why Representatives Ocasio-Cortez, Rashida Tlaib, and Ilhan Omar, along with Stacey Abrams, who almost became the first African American governor of Georgia, are such an exciting new generation of leaders.

Especially this year, it would be nice to see a young, progressive woman of color pick up the mantle from Bernie. But, so far, there is no Democratic candidate in the race who is more progressive than Sanders.

All of the Democratic candidates are emphasizing unity in the divisive Trump era. All are sounding economic populist themes.

Not Kamala Harris, the tough prosecutor who says she is personally opposed to the death penalty, but as California’s state attorney general defended its use in a federal lawsuit. Not Senator Cory Booker, Democrat of New Jersey, whose ties to Wall Street and the charter school industry have alienated him from labor, teachers’ unions in particular. And not former Vice President Joe Biden, who once called for getting “predators” off the streets through a draconian crime bill. 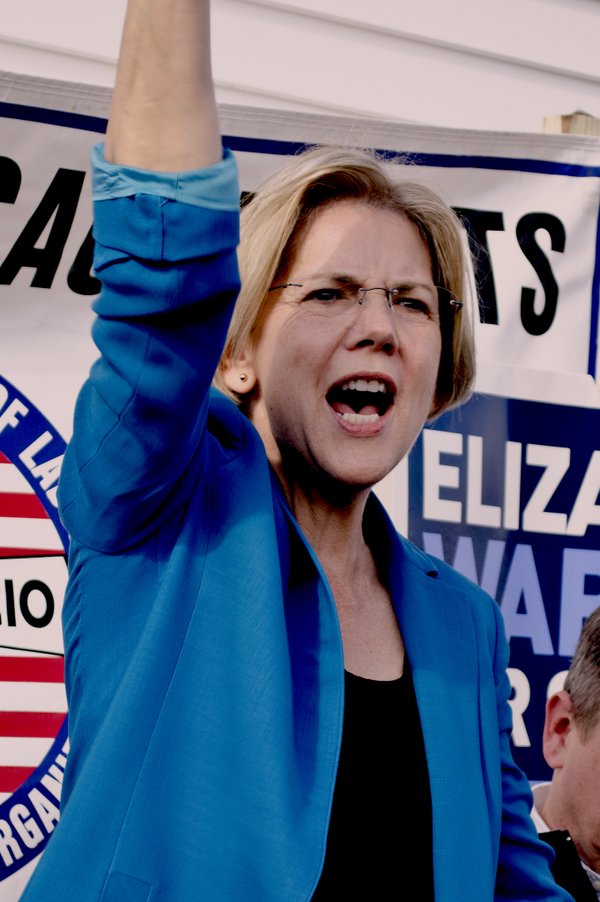 Elizabeth Warren, who thrilled progressives when she flirted with running in 2016, is the favorite candidate of the million-member Progressive Change Campaign Committee (PCCC), which coined the term “the Elizabeth Warren Wing” of the Democratic Party.

Back when Warren was still unsure whether to run in 2016, a progressive political consultant told me that some advisers had begun tossing around the idea of a “plan B for Bernie.” Sanders was not a fan of the phrase.

Now that Bernie has become a household name, and has been leading in early polls, it’s not clear if Warren can reclaim her mantle as leader of her wing of the party.

The PCCC has been doing a funny dance, putting out positive statements about Sanders, while reiterating the view that Warren is the best candidate.

This year, Warren was the first Democratic candidate to announce, at a rally in Lawrence, Massachusetts, where she took the stage to the working women’s anthem “9 to 5.” She told the story of Lawrence’s female, immigrant textile workers who led the great strike of 1912, launching the modern labor movement.

“It’s a story about power—our power, when we fight together,” she declared, connecting the early struggles of working people to the fight for $15 an hour, family leave, universal health care, and “big, structural change” to transform a rigged system.

Amy Klobuchar struck a different tone, announcing her candidacy on the banks of the Mississippi during a snowstorm and emphasizing her Midwestern roots.

“Let us cross the river of our divides and walk across our sturdy bridge to higher ground,” Klobuchar said, before closing with the requisite “God bless the United States of America.”

All of the Democratic candidates are emphasizing unity in the divisive Trump era. All are sounding economic populist themes. All denounce the Trump Administration’s cruelty to immigrants and emphasize racial harmony and civil rights.

The Sanders campaign, well aware that Sanders needs to shore up his support among black voters, leaned hard on his civil rights bona fides in Chicago. After a rip-roaring introduction from his African American campaign co-chair Nina Turner, who connected the Sanders campaign to the freedom struggle going back to Harriet Tubman, Sanders talked about his formative years as a civil rights activist with the Congress of Racial Equality.

In her announcement in Oakland, California, Harris talked about being the daughter of a father from Jamaica and a mother from India who met while participating in the civil rights movement. Then, like Klobuchar, she closed out her speech with a “God bless you” and “God bless the United States of America.”

Despite her background, and her support for Medicare for All, Harris sounds like an establishment candidate.

Not Sanders. The 1960s music, the fist-pumping by the young neighborhood activists who preceded him to the podium, the ebullient in-your-face speech by Nina Turner—all of it looked like a nightmare come to life for conservatives of both political parties. This was the specter they tried to attach to Obama: socialism, radical activists from the 1960s, race and class antagonism. Sanders isn’t running from it. He’s leaning in.

He threw down the gauntlet on corporations that pay no taxes, on big pharmaceutical companies that rip off the sick and elderly. And this: “Today, we say to the military industrial complex that we will not continue to spend $700 billion a year on the military—more than the next ten nations combined.” We should invest in human needs, he said, “not more nuclear weapons and never-ending wars.”

The Democrats’ dilemma is bringing together the economic justice message that caught on in 2016 with the Sanders campaign, helped elect a Republican outsider who sounded like a populist, and has gained even more traction since then, with so-called identity politics—a phrase used to dismiss the aspirations of underrepresented people, who, in the violently racist and sexist Trump Administration, are in no mood to be overlooked.

It’s not an easy task. For one thing, voters have become even more polarized since 2016, including geographically. The Democrats are now the party of urban areas, while Republicans are the party of rural areas and small towns.

Besides the tensions between “Bernie Bros” and Hillary supporters left over from the last election, there is the question of what to do about white, rural voters who feel abandoned by both parties.

I’ve met some of those voters recently, while covering the dairy farm crisis across the Upper Midwest. Some are Obama/Trump voters who supported Trump to throw a rock at the whole system. In their announcement speeches, the Democratic candidates tried to appeal to them.

“We will end the decline of rural America, reopen those rural hospitals that have been closed, support family-based agriculture, and make sure that our young people have decent jobs so that they do not have to leave the small towns they love and where they grew up,” Sanders said.

Klobuchar pledged to connect every household to the Internet by 2022, “and that means you, rural America.”

And Warren, in recalling those textile workers who helped launch the labor movement, said, “It’s a story about power—our power, when we fight together.”

At the Sanders rally, when his fans began to chant “Bernie! Bernie!,” the candidate scolded them a little, reminding them that this is a group effort. “No, no. Nope. Not Bernie—all of us,” he said. The crowd obediently switched to a murky “Go, we, go!”

Sheesh. Can’t the revolutionaries have a little fun?

If we do not allow Trump to divide us, Sanders said in closing, “if we stand together,” gay and straight, black and white, urban and rural, male and female, “if we believe in love and compassion, the truth is there is nothing we cannot accomplish.”

"These Are Not 'Clashes'": Media Slammed for Coverage Amid Deadly IDF Attacks on Gaza

Juan Cole
By Supporting Trump's Move of the US Embassy to Jerusalem, Biden Enabled Israeli Ethnic Cleansing of Palestinians
END_OF_DOCUMENT_TOKEN_TO_BE_REPLACED
Connect With Us

END_OF_DOCUMENT_TOKEN_TO_BE_REPLACED

In a sickeningly cynical move into "intersectional imperialism," the CIA has a new campaign that giddily weaponizes progressive buzzwords to coax young POC into their regime-changing, death-squad-funding, empire-building global adventures. Meet Mija, an Ecuadorian, anti-patriarchy "cisgender milennial" in a raised-fist t-shirt proclaiming, "I am unapologetically me" - CIA-ese for, "And I won't apologize for killing you, or anyone, really."
Read More...
END_OF_DOCUMENT_TOKEN_TO_BE_REPLACED