As we scramble to locate hospital beds and life-saving equipment during this pandemic, remember that we are fighting two diseases.

"Lean and mean may be good for profits but not for Grandma," the author writes. (Photo: Joseph Prezioso / AFP via Getty Images)

If you or your loved ones become seriously ill during this pandemic crisis, either with Covid-19 or for any other reason, there may not be a hospital bed or life-saving equipment available for you. How can that be given that we spend twice as much on health care than any other country on Earth?

Maybe that’s just the way things go when a massive unexpected healthcare problem strikes. Yes, surely the government could have been better prepared by stockpiling more personal protective equipment and ventilators, given the pandemic guidance they received 15 years ago. But is it really possible for hospitals to have enough beds and costly equipment in times of crisis?

The fact is that between 1980 and today, 400,000 hospital beds have vanished from our system while Wall Street financed a bonanza of hospital mergers and acquisitions. Given population growth of 100 million over this period, this means that the number of hospital beds per 100,000 people in the US has fallen by more than half. In 1980 there was 595 hospital bed for every 100,000 people. Today there’s only 281 per 100,000. 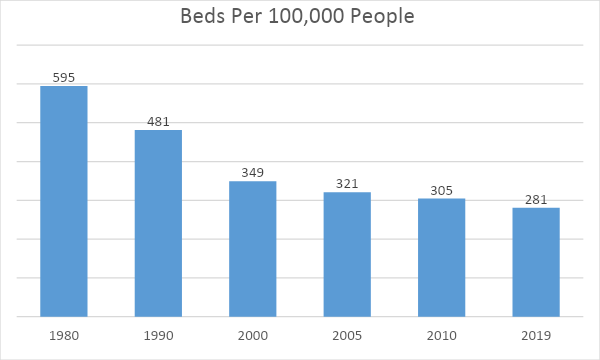 Certainly some of those beds were removed because of changes in medical care. New surgical techniques have emerged that require shorter hospital stays. There also are more outpatient options today, and Medicare has changed its hospital reimbursement policies that have impacted the number of hospital beds. But entire hospitals have disappeared. In 1980 there were 3 hospitals per 100,000 people in the U.S. -- in 2019, only 1.9.  (For sources see here and here.) 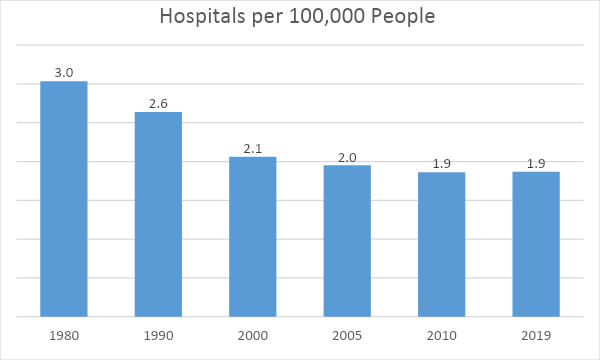 But aren’t mergers supposed to improve care through technological efficiencies and the sharing of medical know-how? Unfortunately, that’s not the case. A recent study published in the New England Journal of Medicine (January 2, 2020) found that “Hospital acquisition by another hospital or hospital system was associated with modestly worse patient experiences and no significant changes in readmission or mortality rates.“ Too bad for us.

Hospitals have not gotten better because that is not the point of all these Wall Street-driven mergers. The real and ever present goal is to extract as much wealth as possible from the hospital system to enrich big investors and CEOs. The extraction takes the form of ever rising executive compensation and ubiquitous stock buybacks. Hospitals are increasingly designed to make the rich richer, not to provide high quality health care to the rest of us.

The top seven hospital chains have amassed nearly a trillion dollars in sales over the past decade with more than $35 billion in net profits.  Where does all that profit come from? From merging hospitals and cutting “excess” bed capacity and staffing to the bone.

In addition to high CEO salaries, private hospital corporations use stock buybacks to enrich themselves at the expense of hospital staffing, beds, and equipment.  By using the company’s funds to buy shares in the open market, the price of those shares rises thereby enriching Wall Street investors and the CEOs who receive most of their compensation in stock options and grants. Just these seven companies squeezed nearly $25 billion from the hospitals over the past decade to pay for those stock buybacks.

In addition to stock buybacks, there is wealth to be extracted from the real estate under hospitals. Here’s one current example in Philadelphia:

Many believe that Freedman never seriously tried to save the hospital.  According to the WHYY story, Eileen Applebaum, of the Center for Economic and Policy Research, said “she is worried that a separate sale of the Hahnemann property to a developer will lay a road map for private equity firms around the country:  Buy older hospitals in areas that are gentrifying, separate the hospital from its real estate, let the hospitals go downhill, and then sell the real estate to the developers.”

So as we scramble to locate hospital beds and life-saving equipment during this pandemic, remember that we are fighting two diseases.  The first is the pandemic that feasts on our bodies. The second is Wall Street that feasts on our health care system. Lean and mean may be good for profits but not for Grandma.

Anthony Pahnke, Jim Goodman
Make a Resilient, Localized Food System Part of the Next Stimulus
END_OF_DOCUMENT_TOKEN_TO_BE_REPLACED
Connect With Us

END_OF_DOCUMENT_TOKEN_TO_BE_REPLACED

With US Covid-19 deaths lurching toward 100,000, the front page of Sunday's New York Times was a grisly, somber grid of obituaries of victims from across the country - stunning in both its vastness and the fact it represented just 1% of the carnage. “They were not simply names on a list," read the sub-head. "They were us.” The same day, the man largely responsible spent his second day golfing; then he raved against Joe Scarborough. Vote the monster out, and may he die in prison.
Read More...
END_OF_DOCUMENT_TOKEN_TO_BE_REPLACED