SUBSCRIBE DONATE
Published on
Friday, June 07, 2019
by
Fairness and Accuracy In Reporting (FAIR)

Perhaps if outlets like the Wall Street Journal provided less adulatory coverage of the CIA’s leaders and the organization’s illicit activities, it would be harder for its members like “Bloody Gina” Haspel to get away with lying

The most egregious part of Strobel’s report is its whitewashing of Haspel’s disturbing record in the CIA by uncritically transmitting glowing endorsements by other CIA officials. (Photo: FAIR)

A Wall Street Journal report (5/25/19) by Warren Strobel whitewashed CIA Director Gina Haspel’s career and put a positive spin on the CIA’s insulation from public accountability with its turn towards its greatest opacity “in decades.” 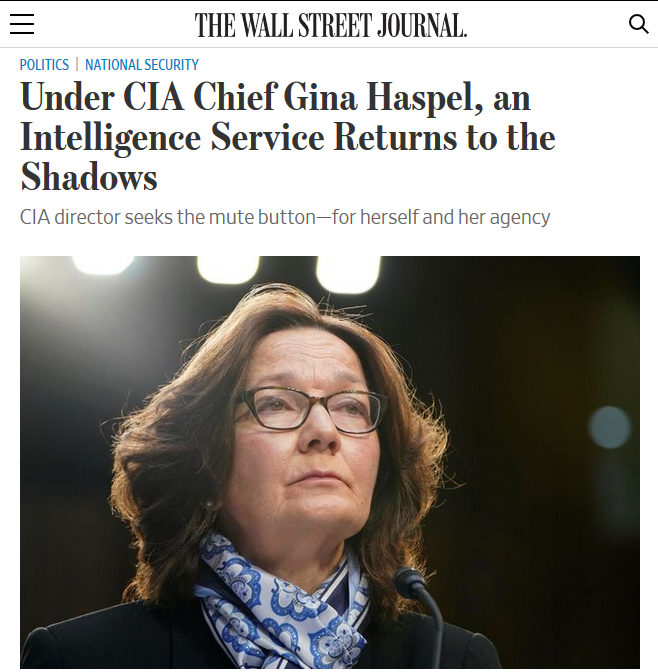 While one might expect CIA officials to support greater secrecy around the organization, it’s odd that ostensibly independent journalists—with a mission to hold official organizations accountable by informing the public—would treat less information coming from the agency as a positive development.

Yet that’s exactly what the Journal report did, depicting Haspel’s strategy of avoiding backlash from the Trump administration by not publicly contradicting its dubious claims as “protecting the agency” from “the domestic threat of a toxic US political culture.”

“She and her agency have adopted their lowest public profile in decades,” Strobel writes—just before summing her up as a “CIA director who has been warmly received by the workforce she has spent her life among.”

In other words, for the Journal, a public intelligence agency sharing its intelligence with the public is a bad thing, unless it supports US foreign policy by agreeing with whatever the Trump administration is saying. This position is echoed in the piece by official sources, like former CIA official and staff director of the House Intelligence Committee Mark Lowenthal, who assures us, “It’s not going to be any good for her [Haspel] to be out there attracting lightning bolts.”

However, the most egregious part of Strobel’s report is its whitewashing of Haspel’s disturbing record in the CIA by uncritically transmitting glowing endorsements by other CIA officials:

Former CIA Deputy Director Michael Morell said he is absolutely confident that Ms. Haspel will push back if policy makers ask the agency to do something it shouldn’t.

“I was told that somebody asked that the agency do something that was inappropriate. Her response was, ‘No. And don’t ask again,’ ” said Mr. Morell, who hosts the Intelligence Matters podcast. He said he did not have details of the incident.

Strange: That’s precisely the opposite of what Haspel did when she was asked to violate domestic and international law by torturing post-9/11 prisoners (euphemized by Strobel as “controversies” over “treatment of detainees”), and peddling lies about torture’s effectiveness (National Security Archives, 4/26/18).

Nor did Haspel say “No. And don’t ask again,” when told to destroy videotape recordings of the CIA inflicting torture on its captives, which was condemned as “obstruction” by 9/11 Commission chairs Lee Hamilton and Thomas Kean (Intercept, 3/13/18; New York Times, 1/2/08).

Haspel actually supervised Detention Site Green in Thailand, one of the US’s notorious “black sites” where suspects were sent to be tortured after being kidnapped and held in another country to evade legal accountability in the US (Washington Post, 11/2/05). Sondra Crossby, a US Navy Reserve doctor with extensive experience treating torture victims around the world, described one of Haspel’s prisoners as “one of the most traumatized individuals I have ever seen.”

John Kiriakou, a former CIA official not cited in this laudatory profile, said that Haspel was known to other colleagues as “Bloody Gina” because people like her “tortured for the sake of torture, not for the sake of gathering information” (Democracy Now, 3/14/18). 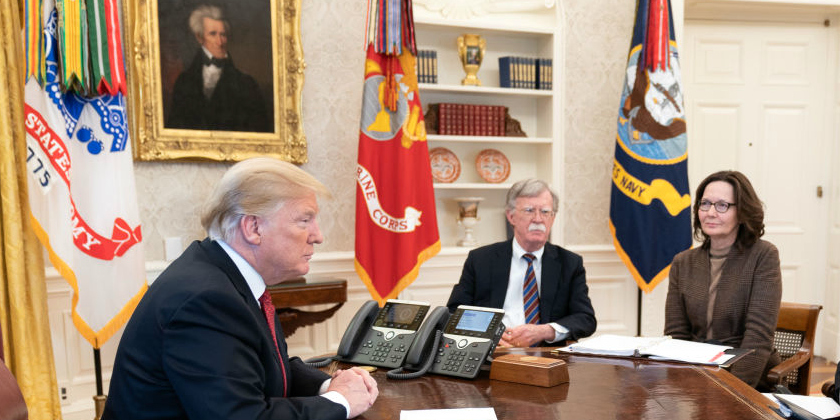 Many of Haspel’s champions have offered the irrelevant and unacceptable “Nuremberg Defense” of “just following orders” to shield her from criticism. Morell himself is one of those people, as he praised her nomination as deputy director specifically because she obediently follows immoral orders (Cipher Brief, 2/2/17):

Haspel does not shy away from the toughest jobs; in fact, she gravitates toward them.  Some of the assignments that she took on have later come under political fire, but in each case she was following the lawful orders of the president.

Morell, as FAIR (10/29/13) has noted, is a propagandist who denies that the CIA engaged in what is indisputably torture, and echoes CIA lies about drone strikes being a “very precise weapon,” with “very low” collateral damage. Such dishonesty is par for the course for CIA higher-ups (Guardian, 1/7/13).

Strobel presumably knows this, as FAIR (Extra!, 4/06) has also noted that Strobel provided some of the most critical reporting on the Bush Jr. administration’s WMD hoax in real time, as Morell was doing his best to advance it. That Morell would defend Haspel is predictable, given that he conducted an internal investigation “clearing” her of any wrongdoing (Intercept, 5/14/18).

Since Strobel’s report depends on current and former intelligence officials as sources, it’s unsurprising that Haspel is considered to be “a good steward” of the CIA precisely because she won’t be a “transformational leader” who would dare to do radical things like respecting the US Constitution’s rejection of “cruel and unusual punishment” and international humanitarian law. The piece downplays the CIA’s illegal activities as mere “controversies,” and presents Haspel and the CIA’s attempts to avoid scrutiny and accountability as “no small accomplishment.”

Perhaps if outlets like the Wall Street Journal provided less adulatory coverage of the CIA’s leaders and the organization’s illicit activities, it would be harder for its members like “Bloody Gina” Haspel to get away with lying. Perhaps instead of getting promotions, they’d face accountability for their actions (FAIR.org, 5/20/09; NBC, 2/9/11).

END_OF_DOCUMENT_TOKEN_TO_BE_REPLACED

As an impeached dumpster fire raves - Twitter was mean to him! Masks mean "social control"! - his abysmal failures have seen us not just hit the grisly milestone of 100,000 deaths but soar right past it: Thursday's toll was 102,794 and rising fast. In response, the Lincoln Project's harrowing new ad savages his "great job" claims with fast-accruing body bags, a chilling echo-chamber of his predicted "close to zero" deaths, and an urgent message: “100,000 dead Americans. One wrong president.”
Read More...
END_OF_DOCUMENT_TOKEN_TO_BE_REPLACED