SUBSCRIBE DONATE
Published on
Tuesday, April 23, 2019
by
The Progressive

Daniel Ellsberg Speaks Out on the Arrest of Julian Assange

"Without whistleblowers we would not have a democracy. And there have to be people to distribute work and publish it."

Journalists should close ranks here against this abuse of the President's authority, and against Britain and Ecuador for violating the norms of asylum. (Photo: Facundo Arrizabalaga/EPA)

As Julian Assange awaits his fate, socked away in maximum security lockdown in Great Britain, his supporters and friends—many of whom believe he is one of the most significant publishers of our time—are vigiling, writing, and speaking out in support of his work and calling for his immediate release. 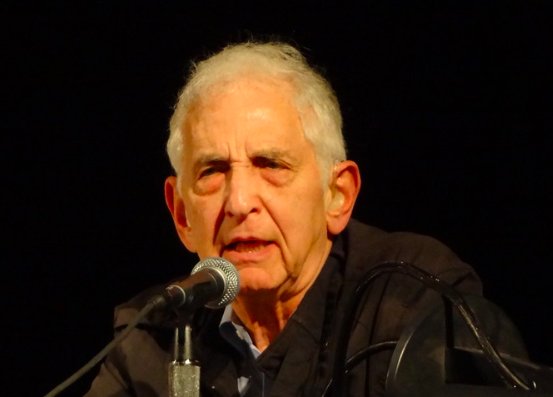 I spoke to legendary Pentagon Papers whistleblower Daniel Ellsberg the morning after Assange was dragged out of the Ecuadorian Embassy in London, with the eyes of the world watching the scene unfold in real time.

Ellsberg says he is both outraged and deeply concerned about the impact this case might have on the free press. “Without whistleblowers,” Ellsberg tells me in the following interview, “we would not have a democracy.”

Q: You have been watching what has been going on with Julian Assange for some time. What do you make of what has just happened?

The First Amendment is a pillar of our democracy and this is an assault on it. If freedom of speech is violated to this extent, our republic is in danger. Unauthorized disclosures are the lifeblood of the republic.

Q: Some people say Assange was just a hacker. Others, including many major news organizations, felt that he was a legitimate source of information. What is the significance of WikiLeaks? Did it change history in a way similar to how the Pentagon Papers changed our knowledge of the Vietnam War?

Ellsberg: It would be absurd to say that Julian Assange was just a hacker. As a young man he was a hacker, and his philosophy is sometimes called “hacker philosophy,” referring to radical transparency, which goes beyond what I would agree with in some cases, in terms of not wanting to redact or curate any of the information at all. His theory is to lay it all out for the public and I think that can have some dangers for privacy in some cases. But that is not involved here.

In this case he was doing journalism of a kind which I think other outlets are jealous of and don’t practice as much as they should. This information was actually first offered by Chelsea Manning to The New York Times and The Washington Post, but neither one showed any interest in it. That is how it came to Julian Assange and WikiLeaks.

The collateral murder video shows up-front murder being done [in an airstrike in Baghdad in July 2007]. You see unarmed people in civilian clothes being gunned down and then as they are crawling away, wounded, being pursued until they are dead. That was murder. Not all killing in war is murder, although a lot of it is in modern war. Other people were watching that video when [Manning] saw it. They were all shocked by it, [but] she was the one who decided that people should be told about this.

Without whistleblowers, our foreign policy would be almost entirely covert. We don’t have as many whistleblowers as we need to have any kind of public sovereignty.

That took great moral courage on her part, for which she paid ultimately with seven and a half years in prison, ten and a half months in solitary confinement. She was recently imprisoned again for refusing to cooperate with a grand jury that clearly is pursuing Julian Assange, hoping to get information beyond what she testified to in her hearings and court trials. . . .

She objects to grand juries in general, as unconstitutional and undemocratic in their secret proceedings. That is the same attitude my co-defendant in the Pentagon Papers trial, Anthony Russo, took forty-eight years ago. He refused to testify secretly to a grand jury. In fact, he offered to testify if they would give him a transcript that would show him exactly what he said and hadn’t said. They wouldn’t accept that and he spent over a month in jail before they decided instead to indict him. Chelsea is taking the same position now and showing the kind of moral courage that she has shown all along.

Julian, meanwhile, is being charged with having gone beyond the limits of journalism by helping Manning to conceal her identity with a new username. He is also charged with having encouraged her to give him documents. That is criminalizing journalism. I can’t count the number of times that I have been asked for documents by journalists or for more documents. She had already given hundreds of thousands of files to Assange and he wanted more. This is the practice of journalism.

Q: There wouldn’t really be much journalism without documents. People used to depend on eyewitness accounts but what beats a document?

Ellsberg: I have been asked what I would do today in the digital era. I would still give them to The New York Times in the hopes that they would print the documents at length. Not many papers take the space to do that and that is why I chose The New York Times. But it was four months after I gave them to Neil Sheehan when they actually published them. During that time he didn’t tell me that the Times was working on it. Nowadays I would not wait, I would give it to WikiLeaks or put it on the net myself.

Q: But Assange was focused on trying to protect his sources. This made it possible for more people to participate and that got on the nerves of the powers that be.

Ellsberg: None of his sources except Chelsea have been identified. Actually, Chelsea chose the wrong person to confide in, Adrian Lamo, who immediately informed on her. In terms of getting documents that are crucial, that is done every day. Very often the documents are not printed. The journalist just uses them to make sure that he or she has a valid story. A document is more likely to identify a source, as happened in the case of the Intercept, I am sorry to say.

Q: Finally, why is it important to protect whistleblowers? This is obviously meant to frighten off anyone with information.

Ellsberg: Without whistleblowers, our foreign policy would be almost entirely covert. We don’t have as many whistleblowers as we need to have any kind of public sovereignty. Unfortunately, people are simply not willing to risk their job or their clearance or their freedom.

In the past, before me and before President Obama, there were very few prosecutions. Freedom of the press was always held to preclude holding journalists and editors accountable for informing the public. This could be a major change. With classified information, which is nearly everything in the foreign policy field, the writer cannot predict what will be embarrassing in the future, what will appear criminal, what will be considered poor judgment. So they classify everything and it stays classified.

Only a tiny percentage of classified information deserves any protection from the public. A great deal of it the public needs and deserves to have. Most leaks were actually authorized, even though they were against regulations, because they served the interest of some boss in the system. They are really given for the benefit of the agency’s budget, or whatever. A small percentage are whistleblowing in the sense of revelation of wrongdoing or deception or criminality, information that the public should know, to avoid a war, for instance.

Q: What other information that the public has the right to see might still be bottled up?

Ellsberg: Eighteen years after it began, we still don't have the Pentagon Papers for Afghanistan. I am certain that they exist, within the CIA and the Pentagon and the White House, stacks of classified estimates that say stalemate is irrevocable in Afghanistan: We can stay there as long as we want but we will never serve American interests any more than now, which is essentially zero, unless it is to free the President of the charge that he has lost a war.

I think these estimates have been there from before the war but we have never seen them. How many people really want to get involved in a war with Russia and Assad in Syria? The estimates would reveal that, and we ought to have those.

It is now up to us to make sure that the First Amendment is preserved.

A war with North Korea or Iran would be catastrophic and I am sure there are many authoritative statements to that effect. But if John Bolton persuades Trump to get involved in such a war, it will happen. It will probably happen without much disclosure beforehand, but if people did risk their careers and their freedom, as Chelsea Manning and Ed Snowden have done, we would have a much better chance that a democratic public would prevent that war from taking place.

Without whistleblowers we would not have a democracy. And there have to be people to distribute work and publish it. Julian Assange has done that in a way in which other publishers have not been willing to. Journalists should close ranks here against this abuse of the President's authority, and against Britain and Ecuador for violating the norms of asylum and making practically every person who has achieved political asylum anywhere in the world less secure.

It is now up to us to make sure that the First Amendment is preserved.

Dennis Bernstein is a host of “Flashpoints” on the Pacifica radio network. You can access the audio archives at www.flashpoints.net. You can get in touch with the author at dbernstein@igc.org.

I've Made Up My Mind: The US Senate Must Abolish the Filibuster

'It Has to Go': The Demand to End Filibuster Intensifies in US Senate

Joe Dinkin
The Choice for Democrats in Congress: Go Big or Go Home
END_OF_DOCUMENT_TOKEN_TO_BE_REPLACED
Connect With Us

END_OF_DOCUMENT_TOKEN_TO_BE_REPLACED

All Senate Dems just voted for a $1.9 trillion COVID relief package; all Repubs voted against it because with millions hungry or unemployed or struggling through an epidemic why would they help anybody when not one "gives a flying fuck" about Americans? Besides, they're busy nursing their white grievance and making a video blasting all the good things the bill will do and filming themselves reading Dr. Seuss while yelling he's been "outlawed," which he isn't. Prine: "Some humans ain't human."
Read More...
END_OF_DOCUMENT_TOKEN_TO_BE_REPLACED