SUBSCRIBE DONATE
Published on
Thursday, March 28, 2019
by
The Progressive

Hiding behind the goal of a “balanced budget,” is a movement about using constitutional change to destroy the power of the federal government

Just days after Scott Walker announced that he was the new head of CSNDS, he announced that he also would be working for a group whose primary focus is to defend Republican state legislatures that have gerrymandered their states. (Photo: H. Darr Beiser, USA TODAY)

Most Americans don’t realize it, but the United States didn’t always have a President. From 1781 to 1789, the nation was governed by the Articles of Confederation, which due to fears about creating another king put all the power in the hands of the states. This quickly became unworkable, so the states called for the Philadelphia Convention, where they disposed of the Articles of Confederation and drafted the Constitution of the United States.

Yet the new document included a provision, Article V, stating that if two-thirds of the state legislatures agree, they can call another Constitutional Convention, where, like the original Philadelphia Convention, they can meet-up and create a new constitution.

That would be a hard sell to most Americans, but what if the convention was narrowly sold as a way to force those rascals in Washington, D.C., to live within their means and pass a Balanced Budget Amendment? Who’s not concerned about the runaway national debt?

That’s pretty much been the pitch of the awkwardly named Center for State-led National Debt Solutions (CSNDS), which in recent years, (thanks to some heavy lifting from the American Legislative Exchange Council), has quietly gotten twenty-eight of the thirty-four states necessary to sign-up under the auspices of passing a Balanced Budget Amendment (BBA).

Of the ten states that CSNDS, which in recent years has merged with the Balanced Budget Amendment Task Force, has targeted in 2019-20 (see map below), Republicans have full control of the state legislatures in five. In other words, the thirty-four-state threshold is very much in grasp. 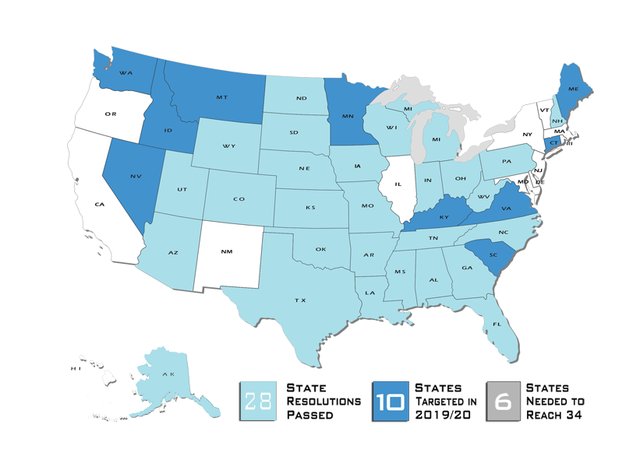 Scott Rogers, who served as executive director for Task Force for a Balanced Budget Amendment for seven years, says his old organization is actually an elaborate bait-and-switch scheme that is hiding its true intentions, as its pick of Walker makes clear.

“The movement became less about reforming our nation’s government, but a vehicle to limit and destroy the power of the federal government.”

“Scott Walker isn't working for a balanced budget amendment and neither is the movement,” Rogers tells The Progressive. “When I first became involved with the Article V movement, it was much more open to bipartisan efforts, and as a registered Democrat, I felt like I could work across the aisle to ensure a fiscally responsible government. However, as the years went on, the movement took a darker turn. It became less about reforming our nation’s government, but a vehicle to limit and destroy the power of the federal government.”

According to Rogers, “The movement is about using constitutional change to destroy the power of the federal government in the name of old-fashioned ‘states rights.’ This is nothing but a polished, media-friendly version of the ‘states rights’ advocated by southern racists in the 1960s.”

Currently serving as the mayor of Charles Town, West Virginia, Rogers believes that once a convention commences, it will “enshrine the doctrines of the Koch Brothers, ALEC, and the religious right” and “endanger the civil rights we all hold dear. One could expect them to pass anti-LGBT amendments, amendments that would limit the ability of African-Americans to vote, the ability of woman to control their own reproductive health, and the list goes on and on.”

Rogers says another part of the group’s strategy to trigger a convention is to bring in people on the left with promises of a Constitutional amendment to overturn Citizens United and address other campaign-finance -reform concerns. Although campaign-finance-reform groups such as Common Cause and Democracy 21 are strongly opposed to a Constitutional Convention, other groups such as Move to Amend are open to a convention “with reservations,” while Wolf PAC, the group founded by progressive activist Cenk Uygur, has voiced strong support.

“There has been a willingness by some of the conservative side to work together to get a Wolf PAC-Balanced Budget Amendment application passed in some states,” Rogers said. “The idea is to appeal to liberals and conservatives, however, it disguises the true nature which is to get the BBA to thirty-four states, knowing that the Wolf Pack Citizens United Article V application has no chance to make it to thirty-four.”

Wolf PAC, on its website, argues that the need for 75 percent state approval will ensure that only bipartisan and common-sense proposals get through. But Fred Wertheimer, former longtime head of Common Core and currently President of Democracy 21, calls that wishful thinking.

“Once a Constitutional convention is called, you cannot limit the issues which the convention can consider.”

Wertheimer adds that it is “unclear how ratification would work” in a convention setting. “Normally, you would need three-quarters of the states to ratify an amendment,” he says. “But the convention could change the ratification rules by amendment and require, for example, a majority of states to ratify the amendments it adopts which, once approved, could supersede the three-quarters requirement.”

These concerns echo those of the late Chief Justice Warren Berger, who said, “There is no way to effectively limit or muzzle the actions of a Constitutional Convention. The Convention could make its own rules and set its own agenda.”

Here’s the kicker: Just days after Scott Walker announced that he was the new head of CSNDS, he announced that he also would be working for a group whose primary focus is to defend Republican state legislatures that have gerrymandered their states.

In last fall’s election in gerrymandered Wisconsin, under the contorted map Walker helped create, Republicans in the Assembly won 64 percent of the seats, despite winning only 46 percent of the votes for those seats.

And like many other gerrymandered states, these rigged legislatures would be the ones sending delegates to a Constitutional Convention. As Rogers aptly puts it, “This a slow-moving coup.”

Jud Lounsbury lives on a small farm south of Madison, Wisconsin with his family and writes for The Progressive and the Uppity Wisconsin blog. Follow him on Twitter: @JudLounsbury

'This Is How Fascists Operate': DeSantis Signs Anti-Voting Bill Behind Closed Doors for Fox News

END_OF_DOCUMENT_TOKEN_TO_BE_REPLACED

Gonzo fans of QAnon, space lasers and the former guy have been frantically busy at Arizona's "audit" of election ballots, using "forensic analysis" and UV lights to study ink and folds and weight and votes from "fake people" to uncover The Big Lie and wrestle good from evil. Now - Racism 101 - they're looking for bamboo particles from ballots purportedly smuggled in from China. THIS IS IMPORTANT!! The dominoes will fall!!
Read More...
END_OF_DOCUMENT_TOKEN_TO_BE_REPLACED