“A country where our environment is protected, where we look after the most vulnerable, where we support our families, where we make sure people have the most basic of needs, like a roof over their head.”

FOR DECADES, AMERICANS have accepted rule by a mendacious and meretricious elite. Today we have reason to believe that our situation is worse than ever. Our president is a hate-mongering bully who promotes foreign wars, the destruction of our natural environment, the further enrichment of the rich, and the impoverishment of everyone else. Republican and Democratic leaders in Congress are cynical money-grubbers who grovel before corporate power. The Supreme Court twists the Constitution to promote the most anti-democratic forces in our society. Founders of our republic would howl in anguished rage if they could see how fully our political leaders have defiled their liberating vision.

The decline of democracy in the United States might logically lead us to conclude that our political system has failed — that democracy is intrinsically unable to resist the power of those who profit from undermining it. That view, however, is contradicted by what other democracies have recently achieved. With hardly any notice in the American press, three very different countries have recently produced leaders who are unapologetically pursuing policies that benefit their people and the world. They are magnificent examples for the United States — unless they lead us to weep in envy.

Perhaps most provocatively, she has asserted that the homelessness problem in her country proves the “blatant failure” of capitalism.

Eight months ago a 37-year-old firebrand named Jacinda Ardern emerged unexpectedly as prime minister of New Zealand. Upon taking office, she pledged to create “a country where our environment is protected, where we look after the most vulnerable, where we support our families, where we make sure people have the most basic of needs, like a roof over their head.” One of her first and most shocking decisions was to stop issuing permits for offshore oil and gas exploration. “Transitions have to start somewhere,” she said. “We have been a world leader on critical issues to humanity by being nuclear-free. . . Now we could be world-leading in becoming carbon neutral.”

Ardern has also challenged other taboos in her country. She supports legalizing marijuana, is the first prime minister to march in a gay pride parade, and promises that women will soon make up half of her party’s caucus in Parliament. More than any of her predecessors, she has promoted the rights of the indigenous Maori people. Perhaps most provocatively, she has asserted that the homelessness problem in her country proves the “blatant failure” of capitalism. “If you have hundreds of thousands of children living in homes without enough to survive,” she reasoned, “what else could you describe it as?” New Zealanders have rewarded Ardern’s truth-telling with a 73 percent approval rating.

“We have the titanic and beautiful task of abolishing the use of fossil fuels in our economy to make way for the use of clean and renewable energy.”


Thousands of miles from New Zealand, voters in Costa Rica recently chose an exciting young leader, Carlos Alvarado, as their new president. One of his two vice-presidents, an economist and environmental activist, is the first woman of African descent to reach such a high post in Costa Rica. Alvarado, who is 38, has declared a transcendent goal: to end all use of oil and gas in his country by 2021, the 200th anniversary of its independence. “Decarbonization is the great task of our generation,” he said. “We have the titanic and beautiful task of abolishing the use of fossil fuels in our economy to make way for the use of clean and renewable energy.”

Just one day after Alvarado was inaugurated in Costa Rica on April 1, another exemplar of democratic will became prime minister of Ethiopia. Abiy Ahmed, 41, comes from the country’s Muslim minority and also from a persecuted ethnic group, the Oromo. He took over a country that has long been ruled by repressive tyrants, is divided along ethnic, religious and regional lines, and has been in constant conflict with neighboring Eritrea. “Expect a different rhetoric from us,” he said upon taking office. “If there is to be political progress in Ethiopia, we have to debate the issues openly and respectfully.”

In just three months as prime minister, Abiy has cut a radical swath through Ethiopian politics.

In just three months as prime minister, Abiy has cut a radical swath through Ethiopian politics. He fired five senior officials who were known for corruption and brutality. Then he announced that he would accept the ruling of a border commission as a way of making peace with Eritrea, even though it requires handing over territory that many Ethiopians consider theirs. He ordered the release of more than 1,000 political prisoners. When a member of Parliament protested that his order was unconstitutional, he replied: “Jailing and torturing, which we did, are not constitutional either. . . Does the Constitution say anyone who was sentenced by a court can be tortured, put in a dark room? It doesn’t. Torturing, putting people in dark rooms, is our act of terrorism.” On June 25 Abiy’s enemies tried to kill him in a grenade attack. “The people who did this are anti-peace forces,” he said afterward. “You weren’t successful in the past and you won’t be successful in the future." 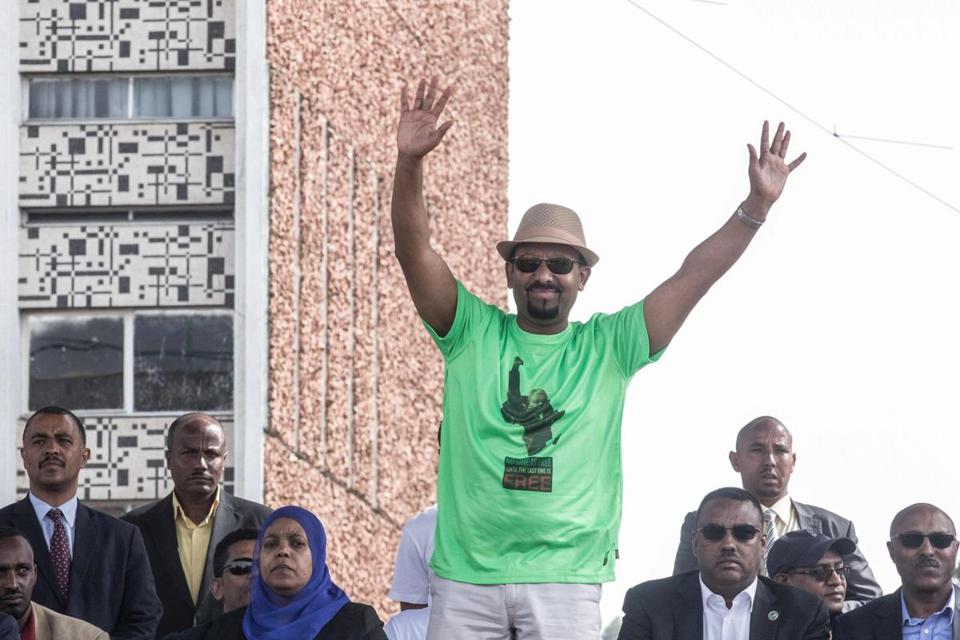 Over the brief history of the United States, Americans have shown ourselves ready to seize anything we covet, anywhere in the world. If we could maintain that tradition, we might now arrange an “extraordinary rendition” operation to kidnap Jacinda Ardern, Carlos Alvarado, or Abiy Ahmed so one of them could be installed in the White House. Lamentably, that is impossible. The alternative is to concentrate on encouraging homegrown leaders who share their humanistic vision. Americans once believed that we could inspire and lead the world. Now we can only hope to catch up with New Zealand, Costa Rica, and Ethiopia.

Meghan Krausch
We Talk About One U.S.-Backed Coup. Hondurans Talk About Three.
END_OF_DOCUMENT_TOKEN_TO_BE_REPLACED

END_OF_DOCUMENT_TOKEN_TO_BE_REPLACED

So cute: Partners in crimes against humanity Stephen Miller, who likes to rip brown kids from their parents, and Katie Waldman, who called teargassed migrants "a violent mob," just got married - at a Trump hotel, duh. The event featured white nationalist cake, Elvis, God - "I object" - and a crowd of festive GOPers, though some reportedly worry Waldman doesn't look quite master-racey enough. The happy couple, who are totally not fascists, hope to soon cage children of their own.
Read More...
END_OF_DOCUMENT_TOKEN_TO_BE_REPLACED