Hundreds of Endangered Species Condoms Given Away at Museums, Zoos for World Population Day

CHICAGO - Chicago’s Field Museum and Lincoln Park Zoo will give away 700 free Endangered Species Condoms on Thursday as part of a new program created by the Center for Biological Diversity to get people who are interested in science and the natural world talking about the effect of human population growth on wildlife.

The colorful condom packages include species threatened by population growth and slogans like “Wrap with care, save the polar bear” and “When you’re feeling tender, think about the hellbender.”

These events mark the debut of “Pillow Talk,” the Center's new educational outreach program with zoos, museums and science centers across the country to encourage their visitors to draw the connection between human population growth and the wildlife extinction crisis. Pillow Talk is the first program of its kind and is launching in time for World Population Day on July 11.

“As our population grows, and urban sprawl and agricultural development destroy wild spaces, species we know and love pay the price,” said Sarah Baillie, a population and sustainability intern at the Center. “People may recognize that we’re crowding out monarch butterflies and horned lizards, but they often don’t realize that there’s a big way individuals can make a difference. Pillow Talk helps people understand how conscientious family planning can protect wildlife.”

In addition to Chicago, Pillow Talk will be a feature of similar events in more than 15 cities this summer including Durango, Colo.; Austin, Tex.; Racine, Wis.; Jersey City, N.J.; Anchorage, Ala.; and Portland, Ore. Center volunteers will distribute thousands of condoms, answer questions and help visitors get a better understanding of the environmental costs of daily actions.

The Center’s population and sustainability program uses creative media to promote a range of common-sense solutions like access to family planning and reproductive health services, as well as education, opportunity and equal rights for women and girls. 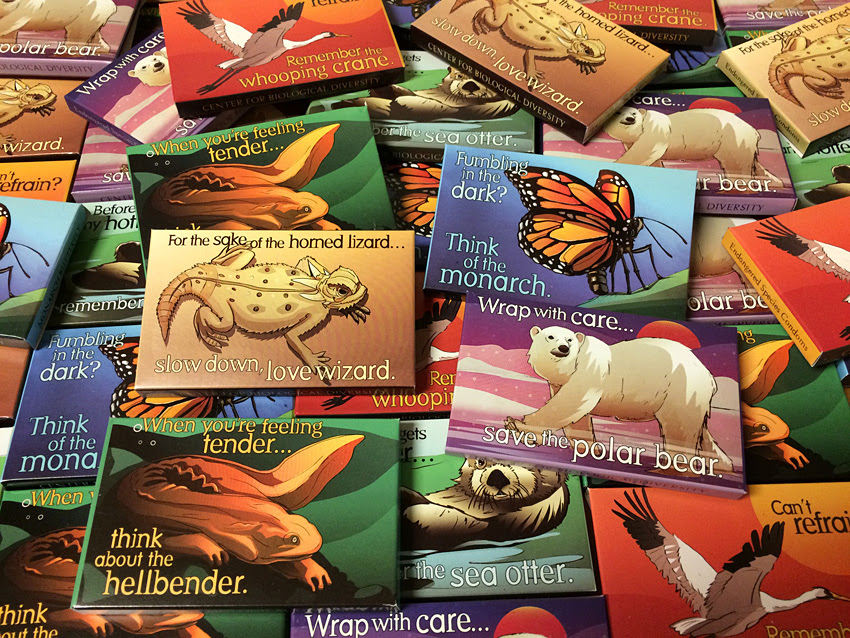 All condom packages designed by Lori Lieber with artwork by Shawn DiCriscio © 2015. This image is available for media use.

The Last Stimulus Ignored Climate. Activists Are Determined That Won't Happen in the Next One.
More in:
Solutions, U.S.
,
Animal Rights, Environment, Polar Bears

David Korten
Earth Is Warning Us We Must Change. Will We Listen?
END_OF_DOCUMENT_TOKEN_TO_BE_REPLACED

Gotta Laugh Or Cry: More grim proof of "the soul-shattering ignorance of our country's leader" in his deranged interview with The Axios' Jonathan Swan, whose actual, unsparing journalism (take note, U.S. media) repeatedly, often incredulously exposed Trump's idiocy - and put the Internet's meme machine into overdrive. Stunners range from Trump fumbling with bright-colored kindergarten-level graphs to his vile, vapid response to our 1,000-plus COVID deaths a day: "It is what it is."
Read More...
END_OF_DOCUMENT_TOKEN_TO_BE_REPLACED