For years organizations have been calling on pension funds to divest from fossil fuels due to environmental racism and the climate impact of these investments.

Environmental organizers across the country are converging in Northern Minnesota in support of Indigenous Water Protectors, to stop the construction of the Line 3 pipeline expansion. Across the country, people  are protesting, sending letters, and making calls to demand that President Biden shut down the construction of Line 3 just as he called for the shut down the Keystone XL pipeline in January. They are also demanding that banks, insurance companies and pensions divest from Enbridge, the pipeline owner. 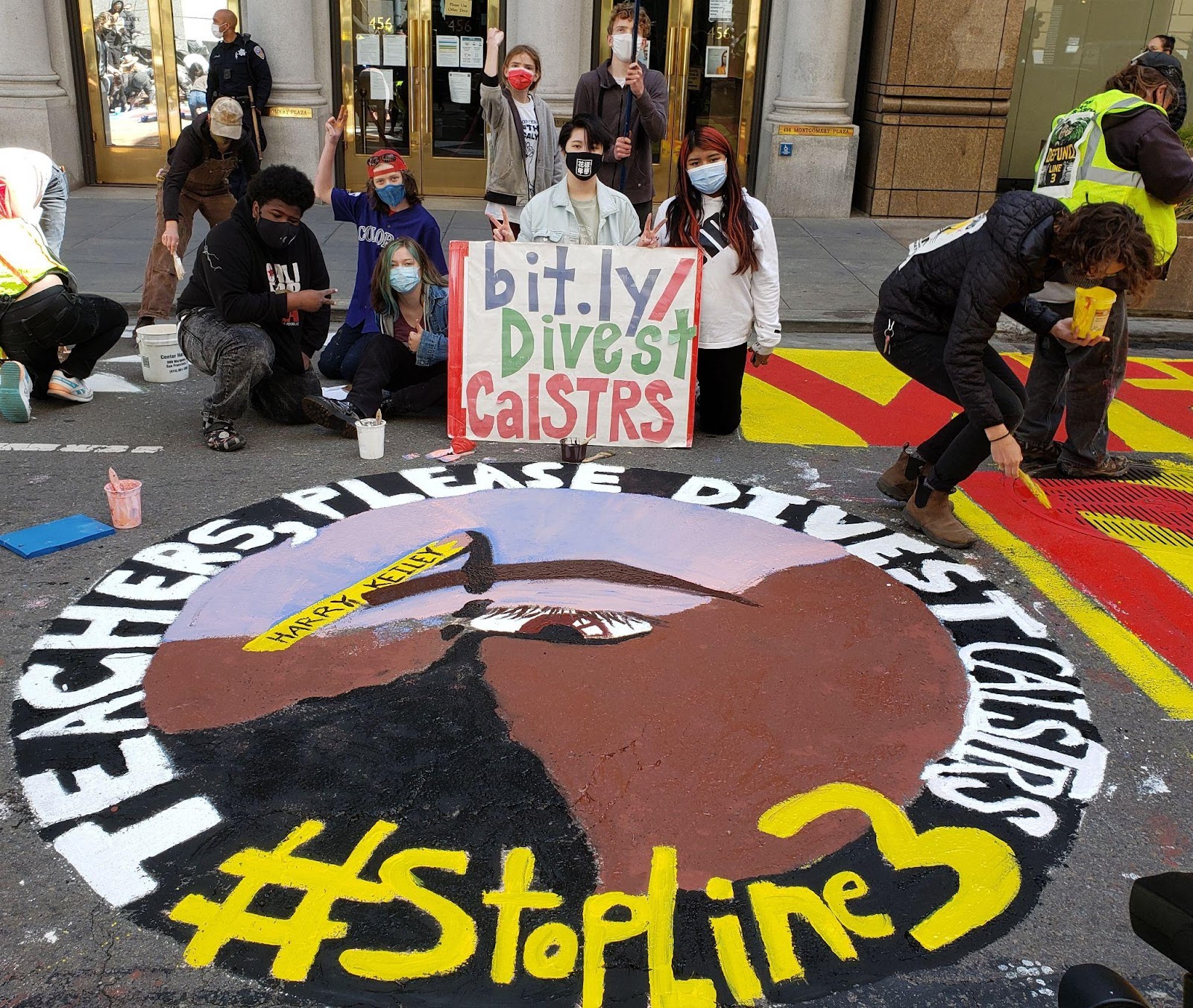 Joining in that struggle, Fossil Free California, Youth vs Apocalypse, and Earth Guardians Bay Area, have been leading the call for the California State Teachers’ Retirement System (CalSTRS) the 11th largest pension fund in the world, to get on the right side of history and divest from Enbridge. For years these organizations have been calling on the pension funds to divest from fossil fuels in general due to environmental racism and the climate impact of these investments. Now they are focusing especially on their Enbridge investments. Students as young as 12 years old with Youth vs Apocalypse and Earth Guardians have been painting large street murals calling for CalSTRS to divest from Line 3. 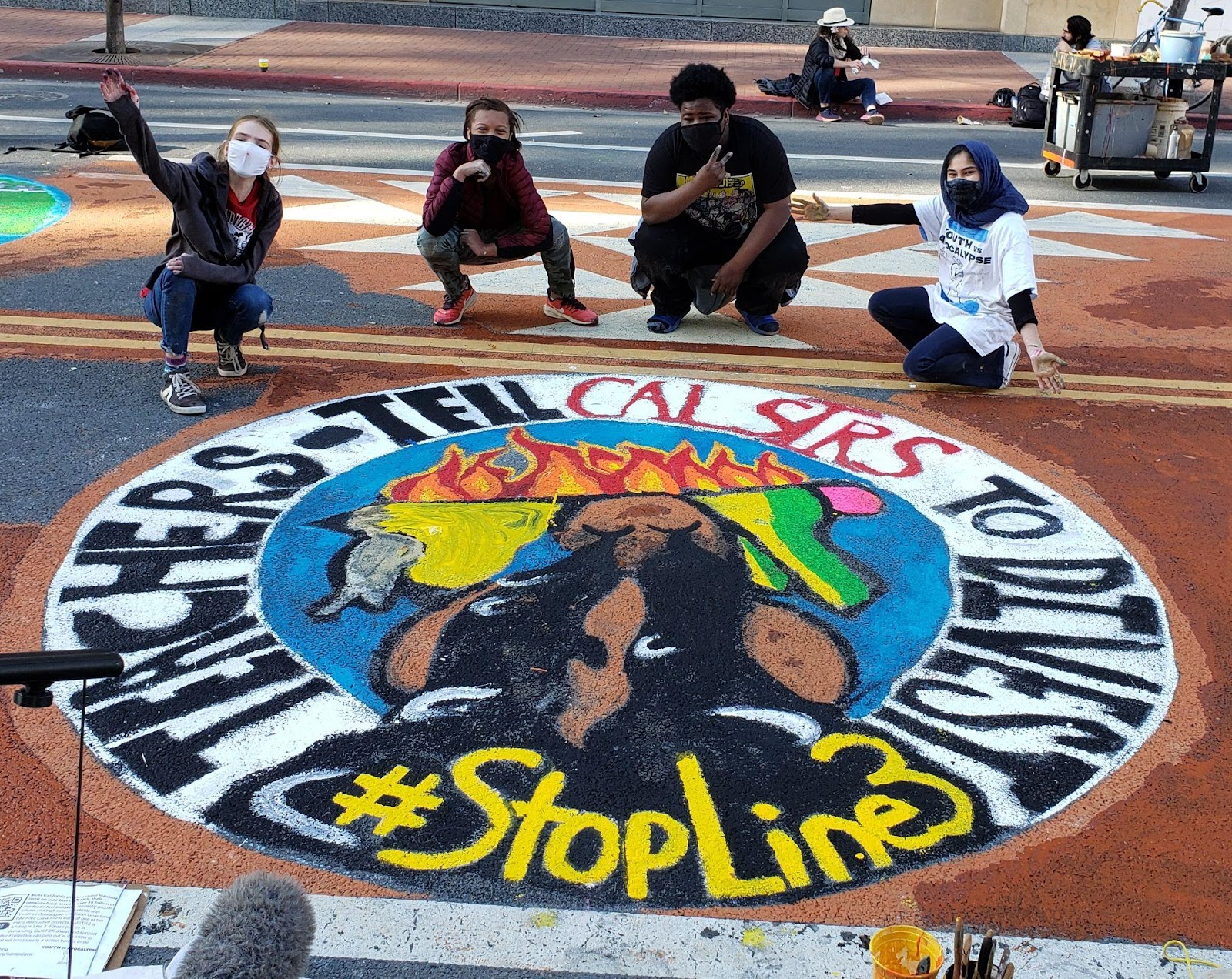 In 1991, Line 3 spilled 1.7 million gallons of crude oil into the frozen Prairie River, which flows into the Mississippi. It was the largest inland oil spill in history and the Mississippi River was only saved by the ice covering the Prairie River which made containment far easier. However, the Line 3 expansion is about to cut directly across the Mississippi River headwaters twice, putting it at direct risk of contamination. While the huge 1991 spill made the headlines, Enbridge’s pipelines have a track record of one spill every 20 days since 2002. Staying invested in Enbridge puts CalSTRS on the wrong side of history. Divesting from Enbridge would help the movement to stop the Line 3 expansion.

CalSTRS has made several failed attempts at engaging with Enbridge about their pipeline construction. In fact, engagement has never gotten a fossil fuel company to stop extracting or burning fossil fuels, and Enbridge is no exception. The futility of CalSTRS engagement strategy was made apparent in 2017 when CalSTRS voted in favor of a shareholder statement that asked Enbridge to report on its “social and environmental risks, including Indigenous rights risks.” That shareholder proposal lost by almost 70%. And yet CalSTRS still is holding on to the $100 million it has invested in Enbridge.

By remaining invested in Enbridge, CalSTRS is:

Even beyond Enbridge, fossil fuel divestment is the obvious best choice. Divesting from fossil fuels would save the fund money. In fact, had they divested 10 years ago, they would have made $5.5 billion more in the past 10 years. Fossil fuels are a dying sector.

So far two CalSTRS board members, State Treasurer Fiona Ma and State Superintendent of Education Tony Thurmond, have come out in favor of fossil fuel divestment. CalSTRS board chair Harry Keiley, who represents the teacher’s unions, and vice-chair Sharon Hendricks, who represents Community College faculty, have continually repeated the arguments of staff: that divesting from fossil fuels would “turn off the lights” and “stop transportation in Los Angeles.” And they have backed the Chief Investment officer Chris Ailman’s argument that it is better to engage with fossil fuel companies than to divest. They have maintained this position in spite of resolutions representing over 100,000 of their members calling on them to divest. Recently, they have refused to meet with youth and teachers of color who want to discuss the environmental racism of fossil fuel divestment and how  over 92% of people living near fossil fuel sites in California are people of color.

Now the questions are: Will CalSTSRS divest from Enbridge and be part of the movement to stop the Line 3 expansion? Will they join the State of New York’s Pension system, the University of California, the government of Norway, and over $15 trillion in global assets under management in divesting from fossil fuels? Or will they continue to co-sign the destruction of our future and ignore the needs of the young people that CalSTRS beneficiaries work so hard every day to educate.

Cynthia Kaufman is the author of  "The Sea is Rising and So Are We", "Challenging Power: Democracy and Accountability in a Fractured World" (2020),  "Getting Past Capitalism: History, Vision, Hope" (2012), and "Ideas for Action: Relevant Theory for Radical Change" (2016). She is the director of the Vasconcellos Institute for Democracy in Action at De Anza College. She blogs at cynthiakaufman.wordpress.com.

Miriam Eide is the Communications and Volunteer Coordinator at Fossil Free California. She also organizes with the Sunrise Movement on campaigns to Stop Line 3 and to build strong alliances between labor and climate activists in the fight for a just transition. Follow her: @miriameide1

'America the Beautiful': Biden Administration Aims to Protect 30% of US Lands and Waters by 2030

Karen Dolan
Biden Deserves Praise for Going Big and Bold on the Economy. Let's Push Him to Go Bigger and Bolder
END_OF_DOCUMENT_TOKEN_TO_BE_REPLACED
Connect With Us

END_OF_DOCUMENT_TOKEN_TO_BE_REPLACED

Gonzo fans of QAnon, space lasers and the former guy have been frantically busy at Arizona's "audit" of election ballots, using "forensic analysis" and UV lights to study ink and folds and weight and votes from "fake people" to uncover The Big Lie and wrestle good from evil. Now - Racism 101 - they're looking for bamboo particles from ballots purportedly smuggled in from China. THIS IS IMPORTANT!! The dominoes will fall!!
Read More...
END_OF_DOCUMENT_TOKEN_TO_BE_REPLACED