SUBSCRIBE DONATE
Published on
Wednesday, October 21, 2020
by
Fairness and Accuracy In Reporting (FAIR)

There is no reason for a fracking ban to be "political suicide" unless corporate journalists are determined to equate that with the death of the fossil fuel industry.

Whenever there are discussions about enacting a national fracking ban, corporate media seem to prioritize the supposed short-term potential “risks” to Democrats’ electoral prospects, or potential economic downturns, over the long-term prospects for human civilization’s survival. (Photo: Food & Water Watch/Flickr/cc)

In last week’s vice presidential debate between Sen. Kamala Harris and Vice President Mike Pence, Harris reiterated Democratic nominee Joe Biden’s rejection of a fracking ban, despite her earlier call for one when she was a presidential candidate (CBS News, 10/7/20):

“I will repeat, and the American people know, that Joe Biden will not ban fracking. That is a fact,” Harris said.

Harris emphasized that Biden “believes” in science; claimed that he “understands that the West Coast of our country is burning” and “sees what is happening on the Gulf states, which are being battered by storms”; and that he has “seen and talked with the farmers in Iowa, whose entire crops have been destroyed because of floods.”

One can —only wonder whether Biden or Harris truly “believe” in science when they pretend a fracking ban and a host of other strong climate measures are not urgent necessities required immediately. In 2018, the UN’s Intergovernmental Panel on Climate Change announced that carbon pollution needed to be cut by 45% by 2030 in order to keep the planet below the critical 1.5°C warming threshold to prevent irreversible planetary devastation (Guardian, 10/8/18). As time goes on, more reports inform us that pollution and the climate crisis are actually even worse than we thought (e.g., Vox, 8/12/20; New York Times, 10/23/19, 12/4/19).

Yet whenever there are discussions about enacting a national fracking ban, corporate media seem to prioritize the supposed short-term potential “risks” to Democrats’ electoral prospects, or potential economic downturns, over the long-term prospects for human civilization’s survival. 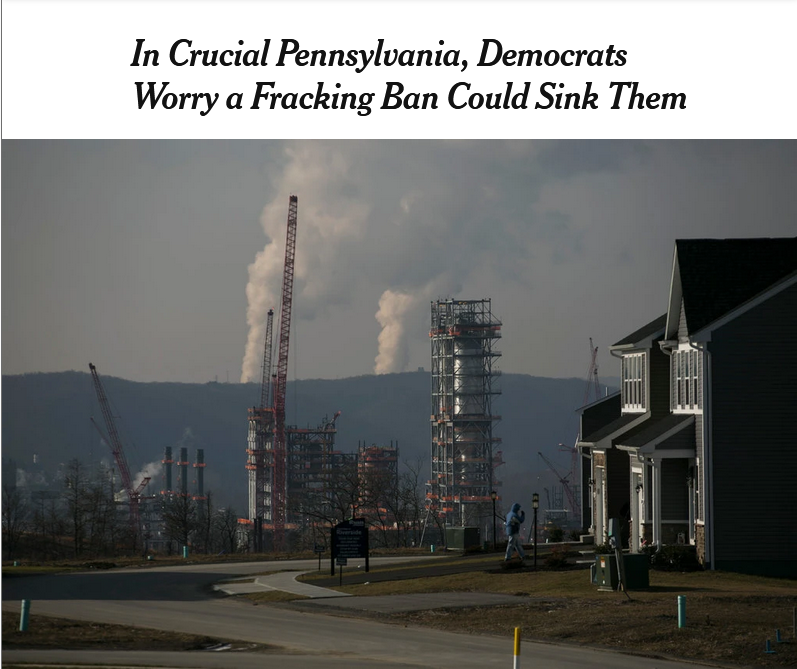 When there was discussion of Sen. Bernie Sanders and Rep. Alexandria Ocasio-Cortez’s bill for a nationwide fracking ban earlier this year, the New York Times’ “In Crucial Pennsylvania, Democrats Worry a Fracking Ban Could Sink Them” (1/27/20) cited a few state Democratic politicians claiming that any presidential candidate who supports a national fracking ban would risk losing Pennsylvania in the general election. The Times trivialized the issue by reducing it to a “political bet,” with the highest stakes being the mere loss of a Democratic presidency, as opposed to dooming humanity to climate apartheid (FAIR.org, 7/30/19) and ultimately losing human life as we know it to natural disasters (FAIR.org, 6/11/19, 9/5/19, 1/3/20, 9/18/20). The Times’ Lisa Friedman and Shane Goldmacher wrote:

A pledge to ban all hydraulic fracturing, better known as fracking, could jeopardize any presidential candidate’s chances of winning this most critical of battleground states — and thus the presidency itself…  In some ways, the fracking ban is indicative of the entire political bet undergirding the candidacies of Mr. Sanders and Ms. Warren that the 2020 campaign will not be won by appeals to the narrow interests of traditional swing voters but through the mass mobilization of an energized electorate. 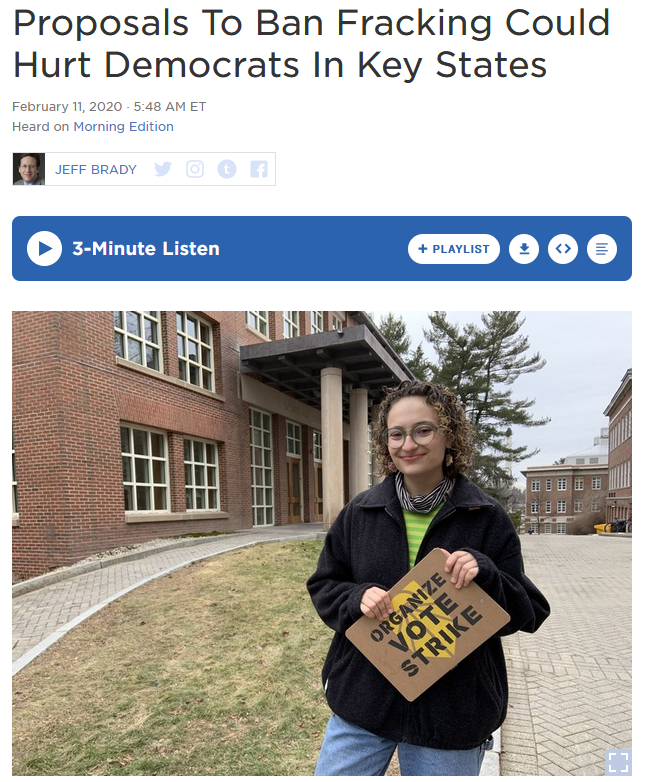 NPR’s “Proposals to Ban Fracking Could Hurt Democrats in Key States” (2/11/20) likewise made dubious pronouncements on the opinions of swing-state voters the focal point of the story, as opposed to what actions are required to resolve the climate crisis:

Climate change is a top issue in the Democratic presidential primaries and some candidates have taken relatively aggressive policy stands, including vows to ban hydraulic fracturing. But some Democrats worry that could push moderate voters in key swing states to reelect President Trump next November… In a swing state like Pennsylvania, a major gas producer, fracking and energy are key issues. Even a small segment of voters swayed one way or another could change the election.

After the primaries, it’s clear that corporate media believe it’s their duty to function as Biden’s de facto campaign manager by explaining to voters what Biden’s position on a fracking ban actually is, as well as advising Biden to reject a fracking ban because, they claim, that would be an electoral disaster. Soon after the debate, Quartz (10/8/20) explained that Biden and Harris don’t support a fracking ban, because it “tempts political suicide in swing states like Pennsylvania and Ohio where fossil fuels still rule.” Why an electoral disaster ought to be prioritized over civilizational disaster is never explained. 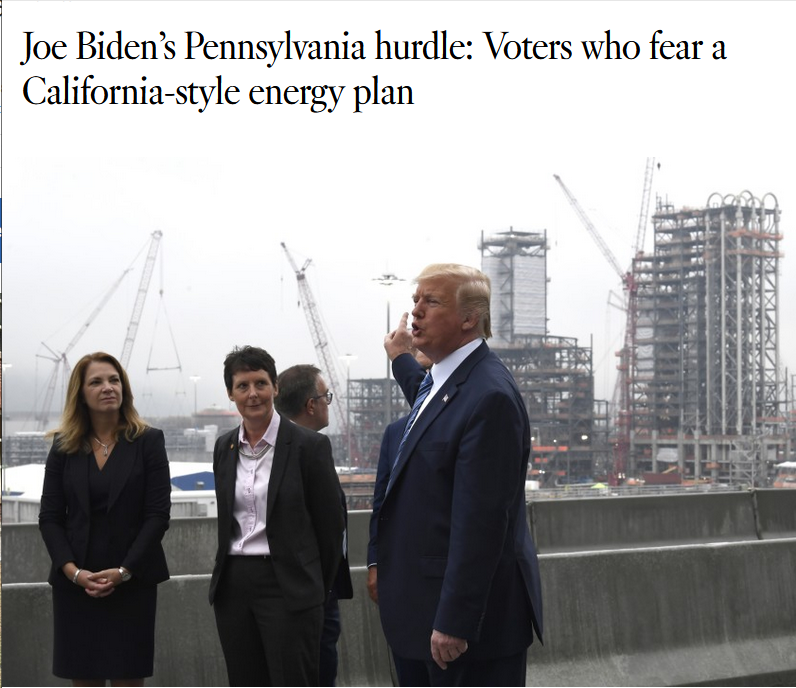 The Los Angeles Times’ headline “Joe Biden’s Pennsylvania Hurdle: Voters Who Fear a California-Style Energy Plan” (9/23/20) presented swing voters as an obstacle to Biden’s electoral ambitions, as opposed to presenting Biden as an obstacle to stronger environmental protection and meaningful climate action for the country. The LA Times described Biden’s opposition to a fracking ban as a “nuanced position,” and characterized Biden’s climate plans as “robust,” despite his opposition to climate action on the scale of a Green New Deal. Instead of advising Biden to go after younger voters who care more about climate action, the LA Times advised Biden to go after swing voters who don’t care as much:

Television commentary about the presidential race may focus on the future of the Supreme Court and other national questions, but in the states that will actually decide the election, local issues often matter more. In this corner of America, that means fracking. Voters whose economic well-being depends on extracting natural gas are extremely skeptical of any politician who would inhibit it.…  The key for Biden, party strategists believe, is to maintain a carefully balanced approach, even if that frustrates activists on both sides.

However, as journalist David Sirota (Daily Poster, 10/8/20) pointed out, this flimsy basis for rejecting a fracking ban isn’t even true:

There’s just one problem with that storyline: It isn’t substantiated by empirical data. Indeed, the idea that a fracking ban is political poison in Pennsylvania is a fantastical tale fabricated by a national press corps that refuses to let public opinion data get in the way of fossil fuel propaganda and a manufactured narrative.

A January poll of Pennsylvania voters, from Franklin and Marshall University, found that more voters (49%) believe that the environmental risks of fracking outweigh the economic benefits than the reverse (38%), and that more registered voters support a fracking ban (48%) than oppose it (39%). A local CBS report (1/30/20) noted Franklin and Marshall University’s findings in its headline, showing that “Pennsylvanians Favor Statewide Ban on Fracking.” A later CBS/YouGov poll in August found 52% of Pennsylvania voters supporting a fracking ban. A slight majority in support of a fracking ban does not make it a political ace, but neither is it “political suicide.”

Environmental activist Bill McKibben (New Yorker, 10/9/19) pointed out that US claims to have reduced carbon emissions during the past 20 years have mainly been accomplished by replacing coal-fired power plants with natural gas-fired power plants. While burning gas produces less carbon dioxide than coal, carbon dioxide isn’t the only greenhouse gas. The second most important contributor is methane, which can warm the planet more than 80 times as much as the same amount of carbon dioxide over a 20-year period.

“Fracking,” more formally known as “hydraulic fracturing,” is a method of extracting natural gas (as well as oil) from the ground with a horizontal drilling process that pumps water, sand and chemicals into the ground to fracture rocks that release fossil fuels. And in the process of fracking, lots of methane leaks out at every stage. The US strategy of reducing carbon emissions without reducing the total amount of greenhouse gases emitted is a form of literal gaslighting that encourages other countries to do the same.

The New York Times (11/8/19, 12/16/19) has published a series of excellent investigative reports that used infrared video gear and satellite measurements to capture the invisible methane emissions at “super emitter” fracking sites, where large-scale methane leaks are responsible for a disproportionately high share of methane emissions. The Times (6/21/18, 2/19/20) has also reported on findings showing that the US oil and gas industry is responsible for a much larger proportion of methane emissions than the US government previously thought, with oil and gas production in general being more responsible for soaring methane levels than natural sources, like the ocean bed and mud volcanoes.

For example, a 2017 study of the Barnett Shale Basin in Texas found that super emitters made up 1% of sites, but were responsible for nearly half of all methane emissions, while Robert Howarth, an earth system scientist at Cornell University, estimated that North American gas production is responsible for a third of the global increase in methane emissions in the past decade. So when US media outlets issue doomsday warnings of mass unemployment from a fracking ban (e.g., CNN, 2/7/20; The Hill, 2/27/20), or pedantic factchecks (e.g., USA Today, 6/19/20; AP, 7/31/20) criticizing Trump for falsely accusing Biden of supporting a fracking ban—when he merely supports banning new oil and gas permits on federal land (which reportedly accounts for less than 10% of US oil and gas production)–it comes across as lethally obtuse.

FAIR (10/16/19) has pointed out how corporate media cheerleading of the “Shale Revolution” helped lead the US to become the world’s largest oil and gas producer during the Obama years; when they bemoaned the loss of fossil fuel emissions during the Covid pandemic (FAIR.org, 4/29/20), corporate journalists seemed more concerned with the profits of advertisers than with the survival of human civilization. Running excuses for presidential candidates in the pocket of the fossil fuel industry is only more evidence of the same.

Environmental and labor activists, economists and scientists have for years discussed the need for a full employment program based on green jobs to serve as a just transition for workers who would be displaced by a fracking ban; there is no reason for a fracking ban to be “political suicide” unless corporate journalists are determined to equate that with the death of the fossil fuel industry.

John Kerry Tells Big Oil to Stop Resisting Energy Transition or "You’re Going to End up on the Wrong Side of This Battle."

The Joy of Tax: An Economy for the Common Good

END_OF_DOCUMENT_TOKEN_TO_BE_REPLACED

Banksy's newest, a two-fer Oscar Wilde tribute and call for prison reform, shows a prisoner climbing down bedsheets ending in a typewriter from Reading Gaol, known for housing Wilde during his two years' hard labor for "gross indecency" - being gay. Video juxtaposes Banky creating it with TV artist Bob Ross burbling about freedom; both are haunted by Wilde's final searing poem about the cruelty and bleakness of life behind bars: "Something was dead in each of us/and what was dead was hope."
Read More...
END_OF_DOCUMENT_TOKEN_TO_BE_REPLACED