SUBSCRIBE DONATE
Published on
Wednesday, July 29, 2020
by
The Progressive

Yemen: A Torrent of Suffering in a Time of Siege

It’s time for the world to demand an end to the policy-driven humanitarian crisis.

The blue backpacks stand for each one of the children killed in the Saudi bombing attack on a school bus. They used a 500 pound bomb manufactured by Lockheed-Martin.

When evil-doing comes like falling rain, nobody calls out ‘Stop!’ When crimes begin to pile up they become invisible. When sufferings become unendurable, the cries are no longer heard. The cries, too, fall like rain in summer.” —Bertolt Brecht

In war-torn Yemen, the crimes pile up. And children who bear no responsibility for governance or warfare endure the punishment.

In 2018, UNICEF said the war made Yemen a living hell for children. By the year’s end, Save the Children reported that 85,000 children under five had already died from starvation since the war escalated in 2015. By the end of 2020, it is expected that 23,500 Yemeni children with severe acute malnutrition will be at immediate risk of death.

In August 2018, bombs manufactured by Raytheon, Boeing, General Dynamics, and Lockheed Martin fell on Yemen like summer rain. On August 9, 2018, a missile blasted a school bus in Yemen, killing forty children and injuring many others.

The highest-paying jobs available to many Yemeni boys and men require a willingness to kill and maim one another, by joining militias or armed groups which seemingly never run out of weapons. Nor does the Saudi-Led Coalition, which kills and maims civilians; instead, it deters relief shipments, and destroys crucial relief infrastructure with weapons it imports from Western countries.

The aerial attacks displace traumatized survivors into swelling, often lethal refugee camps. Amid the wreckage of factories, fisheries, roads, sewage and sanitation facilities, schools, and hospitals, Yemenis search in vain for employment and, increasingly, for food and water. The Saudi-Led Coalition’s blockade, also enabled by Western training and weapons, makes it impossible for Yemenis to restore a functioning economy.

Even foreign aid can become punitive. In March 2020, the U.S. Agency for International Development (USAID) decided to suspend most aid for Yemenis living in areas controlled by the Houthis.

Scott Paul, who leads Oxfam America’s humanitarian policy advocacy, strongly criticized this callous decision to compound the misery imposed on vulnerable people in Yemen. “In future years,” he wrote, “scholars will study USAID’s suspension as a paradigmatic example of a donor’s exploitation and misuse of humanitarian principles.”

As the evil-doing in Yemen comes “like falling rain,” so do the cries of “Stop!” from millions of people all over the world. Here’s some of what’s been happening:

On top of all this, reports produced by Amnesty International, Human Rights Watch, Oxfam, the Norwegian Refugee Council, and the International Commission of the Red Cross repeatedly expose the Saudi-Led Coalition’s human rights violations.

Backpacks and placards carried during protest of the August 9, 2018 Saudi airstrike on a Yemeni school bus.

Yet this international outcry clamoring for an end to the war is still being drowned out by the voices of major military contractors with well-paid lobbyists plying powerful elites in Western governments. Their concern is simply for the profits to be reaped and the competitive sales to be scored. 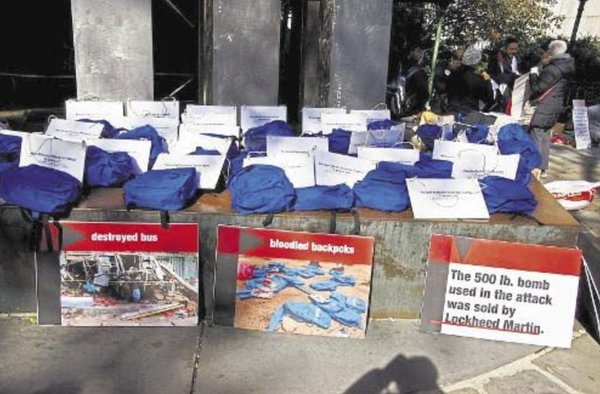 In 2019, Lockheed Martin’s total sales hit nearly $60 billion, the best year on record for the world’s largest “defense” contractor. Before stepping down as CEO, Marillyn Hewson predicted demand from the Pentagon and U.S. allies would generate an uptick between $6.2  and $6.4 billion in net earnings for the company in 2020 sales.

Hewson’s words, spoken calmly, drown out the cries of Yemeni children whose bodies are torn apart by Lockheed Martin’s bombs.

In August 2018, bombs manufactured by Raytheon, Boeing, General Dynamics, and Lockheed Martin fell on Yemen like summer rain. On August 9, 2018, a missile blasted a school bus in Yemen, killing forty children and injuring many others.

Photos showed badly injured children still carrying UNICEF blue backpacks, given to them that morning as gifts. Other photos showed  children helping to prepare graves for their schoolmates. One photo showed a piece of the bomb protruding from the wreckage with the number MK82 clearly stamped on it. That number on the shrapnel helped identify Lockheed Martin as the manufacturer.

The psychological damage being inflicted on these children is incalculable. “My son is really hurt from the inside,” said a parent whose child was badly injured by the bombing. “We try to talk to him to feel better and we can’t stop ourselves from crying.”

The cries against war in Yemen also fall like rain and whatever thunder accompanies it is distant, summer thunder. Yet if we cooperate with war-making elites, the most horrible storms will be unleashed. We must learn—and quickly—to make a torrent of our mingled cries and, as the prophet Amos demanded, “Let justice roll down like waters, and righteousness like a mighty stream.”

Steven Singer
We're Talking About Human Life Here. Unsafely Reopening Schools Is No Solution at All...
END_OF_DOCUMENT_TOKEN_TO_BE_REPLACED
Connect With Us

END_OF_DOCUMENT_TOKEN_TO_BE_REPLACED

Gotta Laugh Or Cry: More grim proof of "the soul-shattering ignorance of our country's leader" in his deranged interview with The Axios' Jonathan Swan, whose actual, unsparing journalism (take note, U.S. media) repeatedly, often incredulously exposed Trump's idiocy - and put the Internet's meme machine into overdrive. Stunners range from Trump fumbling with bright-colored kindergarten-level graphs to his vile, vapid response to our 1,000-plus COVID deaths a day: "It is what it is."
Read More...
END_OF_DOCUMENT_TOKEN_TO_BE_REPLACED