SUBSCRIBE DONATE
Published on
Wednesday, May 11, 2016
by
The Intercept

If impeached on Wednesday, Brazilian President Dilma Rousseff's successor will be Vice President Michel Temer of the PMDB party.

In 2002, Brazil’s left-of-center Workers Party (PT) ascended to the presidency when Lula da Silva won in a landslide over the candidate of the center-right party PSDB (throughout 2002, “markets” were indignant at the mere prospect of PT’s victory). The PT remained in power when Lula, in 2006, was re-elected in another landslide against a different PSDB candidate. PT’s enemies thought they had their chance to get rid of PT in 2010, when Lula was barred by term limits from running again, but their hopes were crushed when Lula’s handpicked successor, the previously unknown Dilma Rousseff, won by 12 points over the same PSDB candidate who lost to Lula in 2002. In 2014, PT’s enemies poured huge amounts of money and resources into defeating her, believing she was vulnerable and that they had finally found a star PSDB candidate, but they lost again, this time narrowly, as Dilma was re-elected with 54 million votes.

In sum, PT has won four straight national elections – the last one occurring just 18 months ago. Its opponents have vigorously tried – and failed – to defeat them at the ballot box, largely due to PT’s support among Brazil’s poor and working classes. 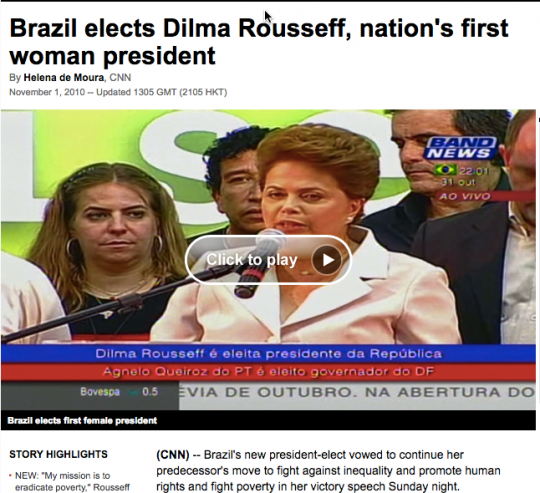 
So if you’re a plutocrat with ownership of the nation’s largest and most influential media outlets, what do you do? You dispense with democracy altogether – after all, it keeps empowering candidates and policies you dislike – by exploiting your media outlets to incite unrest and then install a candidate who could never get elected on his own, yet will faithfully serve your political agenda and ideology.

That’s exactly what Brazil is going to do today. The Brazilian Senate will vote later today to agree to a trial on the lower House’s impeachment charges, which will automatically result in Dilma’s suspension from the presidency pending the end of the trial.

Her successor will be Vice President Michel Temer of the PMDB party (pictured, above). So unlike impeachment in most other countries with a presidential system, impeachment here will empower a person from a different party than that of the elected President. In this particular case, the person to be installed is awash in corruption: accused by informants of involvement in an illegal ethanol-purchasing scheme, he was just found guilty of, and fined for, election spending violations and faces an 8-year-ban on running for any office. He’s deeply unpopular: only 2% would support him for President and almost 60% want him impeached (the same number that favors Dilma’s impeachment). But he will faithfully serve the interests of Brazil’s richest: he’s planning to appoint Goldman, Sachs and IMF officials to run the economy and otherwise install a totally unrepresentative, neoliberal team (composed in part of the same party – PSDB – that has lost 4 straight elections to the PT).

When the People Lead, Leaders Follow—Lessons From the Fight to Impeach and Remove Trump

Women From Every Corner Occupy Brasilia: the Marcha das Margaridas

Meghan Krausch
We Talk About One U.S.-Backed Coup. Hondurans Talk About Three.
END_OF_DOCUMENT_TOKEN_TO_BE_REPLACED

END_OF_DOCUMENT_TOKEN_TO_BE_REPLACED

So cute: Partners in crimes against humanity Stephen Miller, who likes to rip brown kids from their parents, and Katie Waldman, who called teargassed migrants "a violent mob," just got married - at a Trump hotel, duh. The event featured white nationalist cake, Elvis, God - "I object" - and a crowd of festive GOPers, though some reportedly worry Waldman doesn't look quite master-racey enough. The happy couple, who are totally not fascists, hope to soon cage children of their own.
Read More...
END_OF_DOCUMENT_TOKEN_TO_BE_REPLACED