SUBSCRIBE DONATE
Published on
Wednesday, November 20, 2019
by
The Progressive

The Other Americans: Indigenous Guatemalans Mobilize to Denounce Coup in Bolivia

Repression against indigenous Bolivians has spurred protests across the Americas.

Guatemalan civilian and peasants organizations demonstrate in front of US Embassy in support of former Bolivian President Evo Morales, in Guatemala City, on November 14, 2019. (Photo: ORLANDO ESTRADA/AFP via Getty Images)

The situation in Bolivia continues to deteriorate following the rightwing coup d’état that removed President Evo Morales from power on November 10.

The self-proclaimed Bolivian president, Jeanine Áñez, was quickly embraced by the Trump Administration, which praised the military for “abiding by its oath to protect not just a single person, but Bolivia’s constitution.” In reality, the coup has unleashed a wave of racist violence against the indigenous supporters of Morales, the first indigenous president elected in the history of Bolivia.

The new regime has already targeted supporters of Morales’s Movement Towards Socialism party (MAS) and others within a variety of social movements. According to a Inter-American Commission on Human Rights, at least twenty-three people have been killed and more than 700 injured as of November 17.

Across the hemisphere, human rights and pro-democracy groups have stood in solidarity with those protesting the coup, and to denounce the removal of Morales.

On November 18, groups in Brazil and Argentina mobilized in opposition to the far-right coup in Bolivia. And on November 14, hundreds of indigenous Guatemalans associated with the Campesino Development Committee, commonly known as Codeca, marched to the United States embassy in protest of the coup against Morales.

The streets of Guatemala City were filled with chants of “Evo is not alone,” as the indigenous farmers and activists reached the embassy. 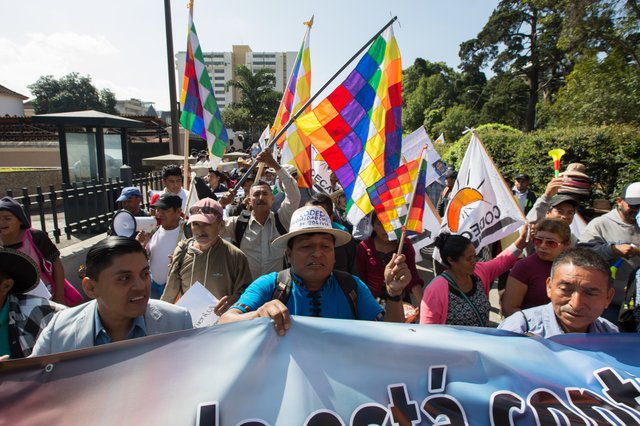 Cabrera, a leader of the indigenous Maya Mam in Codeca, made history with her 2019 bid for president, coming in fourth with 10.3 percent of the vote.

Since his election in 2005, Morales had empowered the indigenous peoples of Bolivia, guaranteeing their inclusion into the Bolivian state. This is best symbolized by the colorful Wiphala flag, which symbolizes the unity of indigenous peoples throughout the hemisphere. Morales also oversaw the transformation of Bolivia’s economy, cutting poverty rates, expanding social programs, and raising the country’s gross domestic product.

The march on November 14 featured a sea of Wiphala flags in solidarity with Morales and the Bolivian people.

Despite Morales’s attempts to build a plural-national Bolivia, he faced criticisms from his own base. One of the biggest critiques from indigenous communities came in 2017, after the announcement of a highway project running through a natural reserve.

“We are in solidarity with the indigenous peoples of Bolivia,” says German Macario Romero, a fifty-three-year-old Maya Mam community authority from San Juan Ostuncalco, Quetzaltenango. “Bolivia is a multicultural country just like Guatemala. We call for the re-establishing of the constitutional order in Bolivia.”

“We are here to show our support for all that Morales did in favor of the lower classes of Bolivia,” he adds.

While Morales faced challenges and took actions that alienated many members of his base as well as Bolivia’s social movements, the plural national state formed by Morales in Bolivia has served as an inspiration for many in Guatemala.

“We are struggling for a popular constitutional assembly to form a plural-national state,” Cabrera says. “We are struggling so that the Mayan, Xinca, Garifuna, and mestizo peoples are integrated into the state. We have a broken state.”

She adds, “When you work for the well-being of all the people, then the oligarchy will not feel good because we are touching their economic interests. We are touching structural problems. We continue to work towards a popular constitutional assembly.” 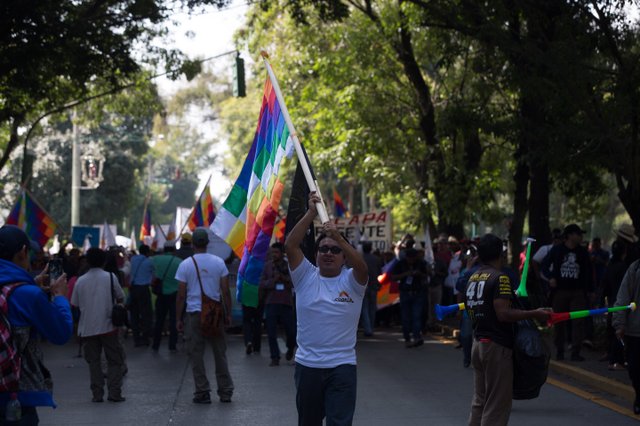 While the situation in Bolivia stems from different historical conditions—including Morales’s rejection of a 2016 national referendum that stated he could not run for a fourth term—for many in the November 14 protest, the coup in Bolivia brought back memories of the C.I.A.-backed coup d’état in Guatemala in 1954.

“The United States has intervened in Latin America as an imperial force,” Ofelia Coli, an activist in Guatemala City who marched to the embassy with Codeca, tells The Progressive. “There is no democracy, there is no respect, and there is no equality.”

Guatemala entered its first democratic period following the revolution against dictator Jorge Ubico in October 1944. The following decade became known as the “Guatemalan Spring,” and was marked by new constitutional rights for indigenous peoples, women, labor, and other sectors of society.

The so-called spring came to a violent end in June 1954, when the C.I.A. oversaw a coup against Guatemala’s first democratically elected president, Juan Jacobo Árbenz.

The United States government and the United Fruit Company had accused Árbenz of being a communist sympathizer after his agrarian reform expropriated unused lands from the banana company. The removal of Árbenz directly provoked the country’s internal armed conflict, which killed 200,000 people, disappeared another 40,000, and displaced more than a million in the years between 1960 and 1996.

"We are struggling so that the Mayan, Xinca, Garifuna, and mestizo peoples are integrated into the state. We have a broken state."

The violence in the internal armed conflict especially impacted indigenous people from the late 1970s to mid-1980s. According to the Historic Clarrification Commission, the acts carried out by the Guatemalan military and state-backed paramilitary efforts against the indigenous Maya people amounted to genocide.

“The interventions by the United States have generated the regression of the development of our communities,” says Macario Romero.

In Bolivia, the anti-indigenous attitude of the far-right has been more pronounced following the coup against Morales. Anti-Morales protesters took to burning the Wiphala flag in the streets following Morales’s resignation, and reports of deadly attacks on indigenous Bolivians have surfaced in the days following the regime change.

As a result, the coup against Morales is seen by members of Codeca as being an attack on indigenous peoples across the hemisphere.

“The aggressions, the terrorism, the racism, and humiliation that our brother Evo Morales is suffering is being felt by all of us as indigenous peoples,” Cabrera says. “The people who carried out the coup in Bolivia burned the Wiphala, but we are here carrying it as a symbol of solidarity with the indigenous peoples of Bolivia.”

Jeff Abbott is an independent journalist and photographer currently based out of Seattle, Washington. He has lived in Haiti and Guatemala, and has covered social movements in the United States, Mexico and Guatemala.

After 'Incredible First Steps' on KXL and Paris, Biden Urged to 'Go Further' on Climate

Bob Burnett
In Defense of Civility
END_OF_DOCUMENT_TOKEN_TO_BE_REPLACED
Connect With Us

END_OF_DOCUMENT_TOKEN_TO_BE_REPLACED

The veterans of the Great Capitol Insurrection, it seems, are not faring well. Scores of rioters have been arrested, many moronically incriminating themselves en route; investigations are finding the Trump campaign supplied untold millions to the pre-riot rally, often via shell companies and dark money that could constitute illegal money laundering; and weary Americans breathlessly await the spectacle of a Trump impeachment trial for what Chuck Schumer just called inciting "the erection."
Read More...
END_OF_DOCUMENT_TOKEN_TO_BE_REPLACED