SUBSCRIBE DONATE
Published on
Friday, September 06, 2019
by
Fairness and Accuracy In Reporting (FAIR)

Rather than detailing the toxic legacy Koch left behind, the obituary quickly went back to describing Koch’s extroverted personality, his reputation as "a playboy whose penthouse parties were attended by models," and his relative success running for president as a Libertarian candidate in 1980.

David Koch may be dead, but his legacy of support for far-right politics and climate change denial lives on. The New York Times, however, chose to focus more on his love for the ballet than on his pollution and profiteering. 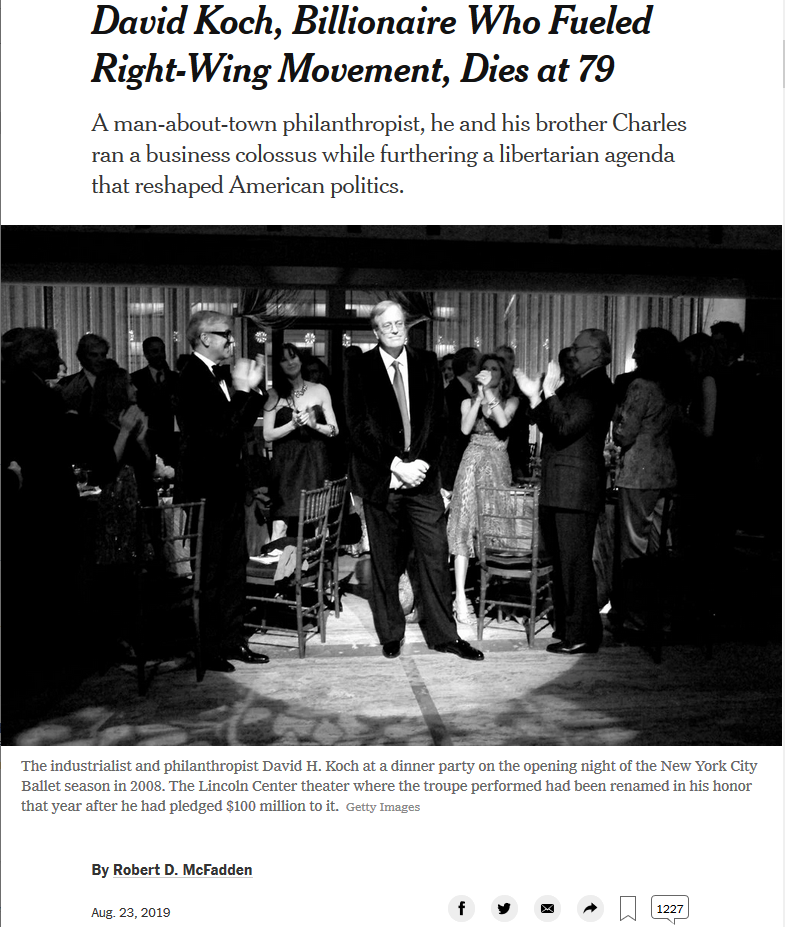 In its obituary (8/23/19), “David Koch, Billionaire Who Fueled Right-Wing Movement, Dies at 79” the Times called Koch a “man-about-town philanthropist.” On the same day, the Times (8/23/19) published an affectionate article calling him “largely uncontroversial” in arts circles because of his donations. Another piece (8/26/19), from a feature called “New York Today,” celebrated the “mark” the “generous benefactor of hospitals and museums” left on New York, listing the David H. Koch Dinosaur Wing at the American Museum of Natural History and the David H. Koch Center for Cancer Care at the Memorial Sloan-Kettering Cancer Center—and ignoring the less glamorous mark his company’s pollution has left on other parts of the country.

According to the Times obituary, Koch was a gregarious 6-foot-5 former college basketball star, a dinosaur buff and a fan of the ballet. “A familiar figure at society galas,” he donated to the Lincoln Center for Performing Arts, the American Museum of Natural History and NewYork-Presbyterian Hospital. The article quoted a saccharine piece from New York magazine (7/23/10), recalling his “seemingly limitless storehouse of Elks club-inflected jokes, which are often followed by his loud, wheezy honk of a laugh.”

The piece listed the expensive homes he owned and his circle of friends—which included Bill and Melinda Gates, Prince Charles and Winston Churchill’s grandson.

The obituary gave a few paragraphs to the views of Koch critics, including Jane Mayer, author of the 2016 book Dark Money: The Hidden History of the Billionaires Behind the Rise of the Radical Right—prefaced by a proclamation that the brothers said they “adhered to a traditional belief in the liberty of the individual, and in free trade, free markets and freedom from what they called government ‘intrusions.’”

It also allowed David Koch to disclaim responsibility for the Tea Party movement, quoting him, “No one representing the Tea Party has ever even approached me”—an evasion as absurd as the climate change denialism that he lavishly bankrolled, a civilization-threatening legacy that is raised in one of the obituary’s 44 paragraphs, never to be mentioned again.

The obituary claimed Koch’s “philanthropies” went mostly to medical, educational and cultural institutions, but many of his contributions were less “philanthropic.” The Koch Family Foundation gave $127 million to 92 climate change-denying organizations and think tanks, for example, according to research done by Greenpeace. Some of these include the Free Market Environmental Law Clinic, which claims to expose “scientific fraud” but faced allegations of attempted extortion, financial mismanagement and fraudulent documents in 2018; and the American Council on Science and Health, a long-exposed corporate front group.

In a sentence, the Times explains “Koch chemical and fossil fuel businesses” were “among the nation’s worst polluters” that paid millions in fines and court judgments for hazardous-waste violations, but the elaboration ends there. 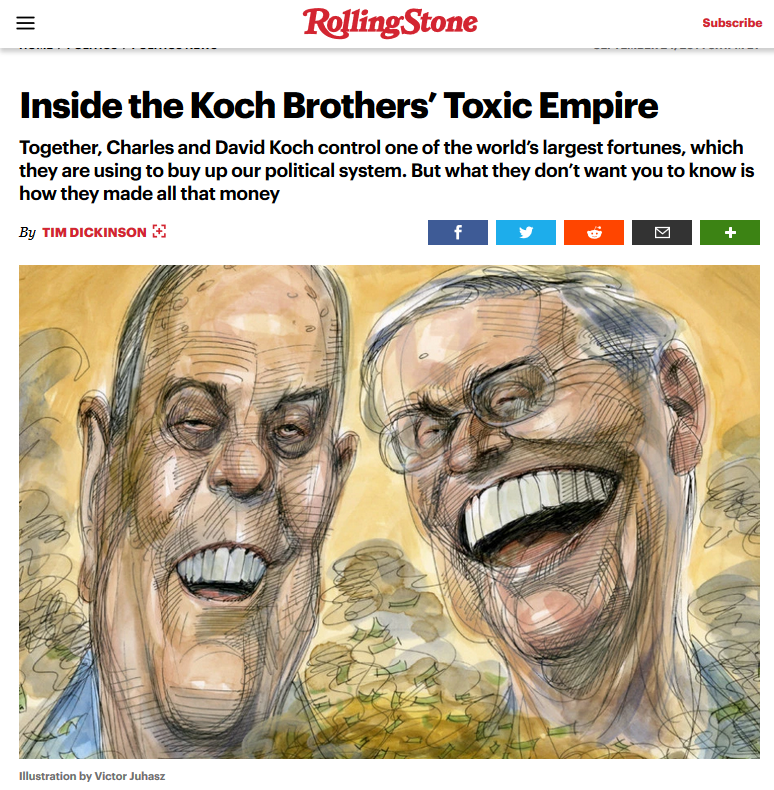 In reality, as Rolling Stone reported (9/24/14), Koch Industries is one of just three companies that made the lists of the worst 30 polluters of America’s air, water and climate. (ExxonMobil and American Electric Power are the other two.) The scathing article, “Inside the Koch Brothers’ Toxic Empire,” also described the $290 million company’s fraught legal history involving congressional investigations, Department of Justice consent decrees, civil lawsuits and felony convictions.

Koch Industries has paid nearly $750 million for 314 recorded instances of environmental violations. In 1996, a Koch pipeline in Texas leaked butane, which killed two teenagers driving their truck through the area. In 1999, Koch Petroleum Group pleaded guilty to allowing aviation fuel to leak into the Mississippi River and illegally dumping a million gallons of toxic wastewater in and around the river. Subsidiaries of Koch Carbon have accumulated piles of petroleum coke, a toxic dust from refining tar sands, that have blown into people’s homes in Detroit and Chicago (Energy News Network, 10/14/13).

While Koch suffered from prostate cancer and donated millions to cancer research, Koch subsidiary Georgia-Pacific worked to downplay the well-known carcinogenic effects of formaldehyde, according to DesmogBlog.com (9/7/10). The Texas Observer (10/24/12) reported that communities surrounding Koch’s oil refinery in Corpus Christi, Texas, were experiencing high rates of illness due to the toxic chemicals the refinery releases—including the known carcinogen butadiene.

Rather than detailing the toxic legacy Koch left behind, the obituary quickly went back to describing Koch’s extroverted personality, his reputation as “a playboy whose penthouse parties were attended by models,” and his relative success running for president as a Libertarian candidate in 1980.

An obituary should memorialize a person, but some people’s legacies are darker than dinosaur exhibits, donations to the arts and appearances at parties for the rich and famous.

Robert C. Koehler
Election Theft and the Reluctant Democracy
END_OF_DOCUMENT_TOKEN_TO_BE_REPLACED
Connect With Us

END_OF_DOCUMENT_TOKEN_TO_BE_REPLACED

Coinciding with the news New York's A.G. is suing to dissolve the mass-murdering NRA - "thoughts and prayers" - March For Our Lives has launched their first TV ad, on Fox yet. Facing an election where for the first time younger and/or darker voters will make up a third of the electorate - and targeting those voters in nine swing states - the devastating ad portrays America's often-racist gun violence before pivoting to warn those in power, "Yo ung people will determine the nation's future."
Read More...
END_OF_DOCUMENT_TOKEN_TO_BE_REPLACED