SUBSCRIBE DONATE
Published on
Monday, May 07, 2018
by
Common Dreams

Spread the word: “We want a just, equitable world for our children.”

"A mighty movement of parents, students, and teachers has risen up to boycott and opt out of these tests as a way to reclaim public education and fight for authentic forms of assessment." (Photo: AP/file)

Today, my third grade son is supposed to take the Common Core high-stakes test, “Smarter Balanced,” at his school here in Seattle. He decided, however, that he would rather do a research project about a leader who has helped to make the world better. So my wife and I are writing the opt out letter and letting our son know that he will be allowed to continue with real learning today about an issue he cares a lot about. 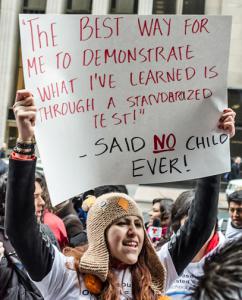 I am going to suggest to him that for his project he research Mercedes Martinez, the president of the Teachers Federation of Puerto Rico (FMPR).

I conducted an extensive interview Mercedes that I will publish soon about her union’s massive struggle to defend the schools from an all-out neoliberal assault. The Financial Oversight and Management Board that was imposed on Puerto Rico by the United States has control of the island’s financial policy and is imposing disaster capitalist policies that are destroying working people’s lives and public schools. The austerity program that they are assaulting Puerto Rico with includes closing nearly 300 schools, laying off some 7,000 teachers, converting 10% of schools into privatized charters, and cutting public sector pensions.

Another part of the disaster capitalist approach to schooling has been to impose the same high-stakes standardized testing regime that we have in the mainland U.S. on the Puerto Rican education system.   High-stakes testing is being used to punish schools, students, and teachers. With teachers living in fear of the consequences low scores, they are forced to teach to the test, not the student, and it is causing a narrowing of the curriculum to what the corporate test makers believe is important to learn (For example, I don’t think the lessons of how to organize your community against corporate education reform will be on the next test). These tests are used as exit exams in high school and are denying thousands of students the chance to graduate. Perhaps worst of all, the testocracy has trained people to believe that wisdom is the ability to eliminate wrong answer choices on a multiple choice exam, rather than to be creative, empathize, or solve real life problems.

But a mighty movement of parents, students, and teachers has risen up to boycott and opt out of these tests as a way to reclaim public education and fight for authentic forms of assessment.

It was truly revelatory to hear from Mercedes just how much inspiration she and her colleagues in Puerto Rico have taken from our struggles here. Citing the first major strike against standardized testing that I helped to organize at my high school, Garfield, in Seattle, Mercedes told me,

We’ve been fighting a long time and you were such an inspiration to all of us….I remember I presented the MAP boycott to many teachers in Puerto Rico when we were starting to try to boycott tests here and people were very much inspired by your struggle. Everybody in the struggle for education in Puerto Rico knows about how in 2013 you all scrapped the MAP. 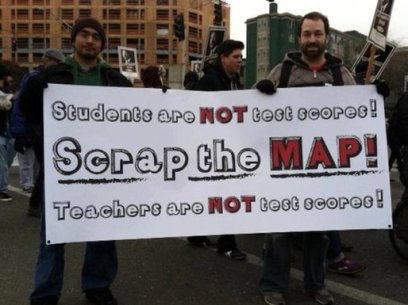 And scrap the MAP we did. After the former superintendent threatened teachers at Garfield and other boycotting schools with a 10-day suspension without pay for refusing to administer the MAP test, he ended up succumbing to the overwhelming international solidarity we received and eliminated the test for Seattle’s high schools all together.

Mercedes went on to tell me that her union has been helping to organize teachers at some 100 schools in Puerto Rico—mostly the schools that have been slated for closure—to refuse to administer the META-PR standardized test starting today, Monday May 7th.   And the parents are joining in too. They plan to help surround the schools and shut them down so the teachers can’t even be asked to give the test!

The stakes in this struggle are certainly high. The department of education wants to impose a letter grade for each school in Puerto Rico based on the test score, another tactic to get schools to worship the almighty test score at the expense of critical thinking.  Even worse, Mercedes told me, “If the boycott doesn’t work, 15% of teacher evaluation will be based on the results of the students’ standardized test scores.”

The American Statistical Association, the oldest and largest association of statistical professionals came out strongly against the use of test scores to rate teachers saying,

The majority of the variation in test scores is attributable to factors outside of the teacher’s control such as student and family background, poverty, curriculum, and unmeasured influences.

The problem, however, is that corporate education reforms don’t care about these facts when there is money to be made. As Mercedes told me, “These tests are only about making millions of dollars for Pearson and private tutoring companies that benefit from Title I, and these absurd tests that don’t measure anything important.” Pearson, of course, is the largest standardized test producer—with a profit margin of some $9 billion.

With that kind of money at stake, the only thing that will stop the richest 1% from seeing dollar signs where they should see students is to refuse the tests all together.

This bold initiative by the educators of Puerto Rico to strike against the test this week may prove to be the largest boycott of standardized testing in history. This is a struggle that the entire opt out movement needs to get behind. This is a historic battle that everyone concerned with the well being of students should support.   One way you can support is by donating to the PayPal account of the Teachers Federation of Puerto Rico. I asked Mercedes how we could best support their struggle.

"You can spread the word on what’s happening here in Puerto Rico," she replied. "You can keep the fight within your own cities because it is just the same fight all over the planet against globalization, neoliberalism. As long as you’re fighting and doing what you have to do for your communities, we will keep doing it here in Puerto Rico. We are sure to build the world that we want—a just, equitable world for our children. That’s the most important thing of all."

Jesse Hagopian teaches history at Garfield High School in Seattle, Washington and director of  Black Education Matters. He is the editor and contributing author to the book, "More Than a Score: The New Uprising Against High-Stakes Testing" (Haymarket Books, 2014) and co-editor of "Teaching for Black Lives." Currently, Hagopian serves as a national surrogate for the Bernie Sanders campaign. Follow Jesse on his blog at www.iamaneducator.com or on Twitter: @jessedhagopian

Frida Berrigan
After 4 Decades of Plowshares Actions, It’s Nuclear Warfare that Should Be on Trial — Not Activists
END_OF_DOCUMENT_TOKEN_TO_BE_REPLACED
Connect With Us

END_OF_DOCUMENT_TOKEN_TO_BE_REPLACED

As thousands pay tribute to Ruth Bader Ginsburg, the first woman, and Jew, to lie in state, we seek to find light where we can amidst the grief, dread, fury, rubble. There's resolve to Block Barrett. There's hard truth: "When the people speak, the Court listens," and they'll only save us if we fight for it. And there's the kids, heartbreaking and uplifting and reverential in their RBG collars, who with their parents came to honor " what America should be," and who give us hope.
Read More...
END_OF_DOCUMENT_TOKEN_TO_BE_REPLACED