SUBSCRIBE DONATE
Published on
Wednesday, December 28, 2016
by
We Meant Well

You know, the helicopter on the roof of the American Embassy in Saigon standing in for years of failed war, the Berlin Wall being knocked down to visually note the end the Cold War, that sort of thing.

Well, the never-ending-gobsmacker of the Afghan War may have gotten its iconic moment.

Afghanistan’s first female pilot, Captain Niloofar Rahmani, above, has applied for asylum in the U.S., citing worsening security conditions, and harassment by male colleagues. Rahmani says her family faces serious death threats from the Taliban and her father has had to go into hiding to avoid being killed. The Afghan government even stopped paying Rahmani’s salary, despite earmarks from the U.S. government for funding.

Captain Rahmani noted, as something as an afterthought, the Taliban also continue to make gain across her country even as America’s War for Freedom enters its 16th year of freeing Afghanistan.

Being a Propaganda Tool is Hard Work

Rahmani was once widely hailed in Washington, D.C., where she received the Woman of Courage award from the State Department in 2015 and was personally praised by First Lady Michelle Obama. Rahmani was rolled into an Obama policy move to focus greater attention and resources on adolescent girls through the Let Girls Learn initiative which no one ever heard from again. 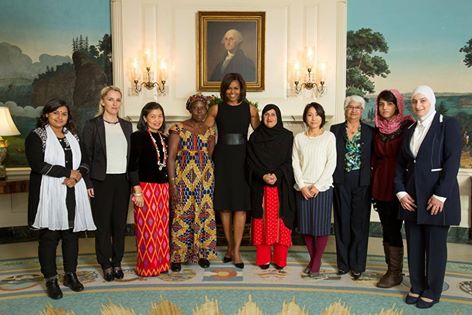 The Afghan pilot was even celebrated as a “woman who builds peace, prosperity, and stability,” which just happened to also be a U.S. propaganda slogan for the Afghan war. And sure, what the hell, the State Department threw in that “she will not be intimidated and she will not be silenced.”

Rahami also had her own Twitter, in English of course, but not updated in over a year. “Her” last tweet– “#Salute to the #daughter of nation #Flying #Officer #Marium embraced $shahadat today #Mianwali The few the proud…” And that Rahami was photogenic by coincidence was not unnoticed.

The Captain summed it all up — her femaleness represented American goals of empowering women, her chosen career as a killer was in line with U.S. plans to destroy the Taliban, and her being in the Afghan Air Force seemed to justify the $3.7 billion U.S. tax dollars expended to create an indigenous Afghan fighting force.

So it’s just a neat kick in the Uncle Sam ass for Rahmani, in the United States for all sorts of expensive training, to bail out and request asylum after 15 months in America training via photo ops and not fighting any Taliban. Why, it’s as if the entire war in Afghanistan itself was merely a lengthy exercise in Potemkin foreign policy…

Peter Van Buren spent a year in Iraq as a State Department Foreign Service Officer serving as Team Leader for two Provincial Reconstruction Teams (PRTs). Now in Washington, he writes about Iraq and the Middle East at his blog, We Meant Well. His books include: "We Meant Well: How I Helped Lose the Battle for the Hearts and Minds of the Iraqi People" (2012) and "Hooper's War: A Novel of Moral Injury in WWII Japan" (2017).

The Impossibility of an "Informed Choice": The Covid-19 Vaccine and Pregnant Women

Investing In Nature Is Essential to Our Shared Future

END_OF_DOCUMENT_TOKEN_TO_BE_REPLACED

Though they rank close to last nationally in health care, education, vaccines - and may face power shortages - Texas lawmakers are spending this week debating four anti-trans bills, including one to make it illegal/ child abuse to offer gender-affirming, often life-saving, health care to trans kids. One, an aggrieved Kai Shappley, 10, has had it with "asking adults to make good choices,” she said. "Please just listen to me, hear me, try to educate yourselves, try to understand...everybody."
Read More...
END_OF_DOCUMENT_TOKEN_TO_BE_REPLACED