Activists place their bodies before a Bagger 288 digger, "the heaviest land vehicle in the world," halting operations, and stopping over 700,000 tons of dirty lignite coal from being extracted. (Photo: 350.org/cc/flickr)

In a stirring act of mass civil disobedience, roughly 1000 protesters stormed the gates of RWE's coalfields in Rhineland, Germany on Saturday, successfully shutting down operations for Europe's biggest carbon polluter.

Under the banner Ende Gelände, which means "here and no further," activists descended on the mine to send a direct message to officials that such extraction will no longer be tolerated amid the encroaching climate crisis.

According to reports, early Saturday morning, an estimated 1,500 faced off with police wielding batons before roughly two-thirds of the protesters broke through and managed to enter the opencast lignite, or brown coal, mine. Lignite is a particularly dirty fossil fuel due to its high moisture content.

"Lignite is the number one climate killer worldwide," one activist said, "what's emitted from the lignite here is having a direct impact on the climate."

In an effort to evade security, the group approached in different "fingers." While police worked to remove much of the present media, a number of the protesters managed to climb atop the massive diggers, halting operations for the day. Others were rounded up and arrested by police and RWE security, who reportedly relied on pepper spray and excessive use of force.

While providing a rolling update on the action, 350.org noted the significance of these shut downs. Known as the Bagger 288, these machines are "the heaviest land vehicle in the world and it is built for no other purpose than ripping open the land in order to extract dirty coal," mining as much as 240,000 tons of coal every day.

"By stopping three of these diggers for the day the participants in this action have potentially prevented over 700,000 tons of dirty lignite coal from being extracted," the group wrote. "That is what we call keeping it in the ground!"

After breaking through the gates, one protester said she was happy to have made it down into the pit, adding, "but also it's shocking." RWE operates four large opencast mines in the region, covering roughly squared 2,500km. Activists say the total amount of RWE's extractions make it the continent's biggest polluter. Saturday's action took place at the Garzweiler facility.

"No matter the outcome of the climate negotiations in Paris this year, people are building power to accelerate the unstoppable energy transition and keep the fossil fuels we simply cannot burn in the ground," 350.org's Parekh told RTCC after the action.

The climate action group produced this video of the mass action and shared a number of dramatic images from the day. 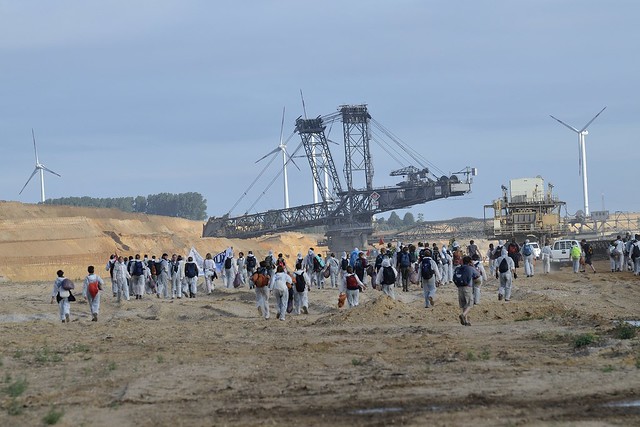 'It Is Like Satire': Prince Charles' Terra Carta Is a Manifesto for the Status Quo