SUBSCRIBE DONATE
Published on
Friday, April 23, 2021
by
Fairness and Accuracy In Reporting (FAIR)

If we have any hope of addressing the climate crisis, journalists have to move beyond debating its existence or importance, and start looking at both its causes—very concretely, looking at culprits—and its solutions.

An on-air journalist makes a report as flames flare up behind him from the Santa Ana wind-driven Bond fire burning near a hill-side residence along Santiago Canyon Road in Silverado, California on December 3, 2020. (Photo: Allen J. Schaben/Los Angeles Times via Getty Images)

In a year dominated by coverage of the coronavirus pandemic, one might expect other topics to fall lower on the media's priority list. But the climate crisis has not lessened in intensity; on the contrary, the urgency of addressing it increases each year. (Not to mention that climate change is an important driver of increased disease outbreaks like the current pandemic.) News media must be capable of covering two emergencies at the same time.

Their failure to do so reached shocking levels last year. ABC's This Week, CBS's Face the Nation and NBC's Meet the Press didn't ask a single question that mentioned the climate crisis, climate change or the Green New Deal until more than two-thirds of the way through the year (9/13/20), when wildfires—which, due to climate change, are becoming more frequent and more intense—devastated the West Coast.

CNN's State of the Union did little better, asking one tangential question earlier in the year (2/2/20) to Republican Iowa Sen. Jodi Ernst about why she believed the Green New Deal and Medicare for All were socialism but farm subsidies were not. Its coverage of extreme weather beat the other networks by two weeks when it reported on Hurricane Laura in Louisiana (8/30/20). 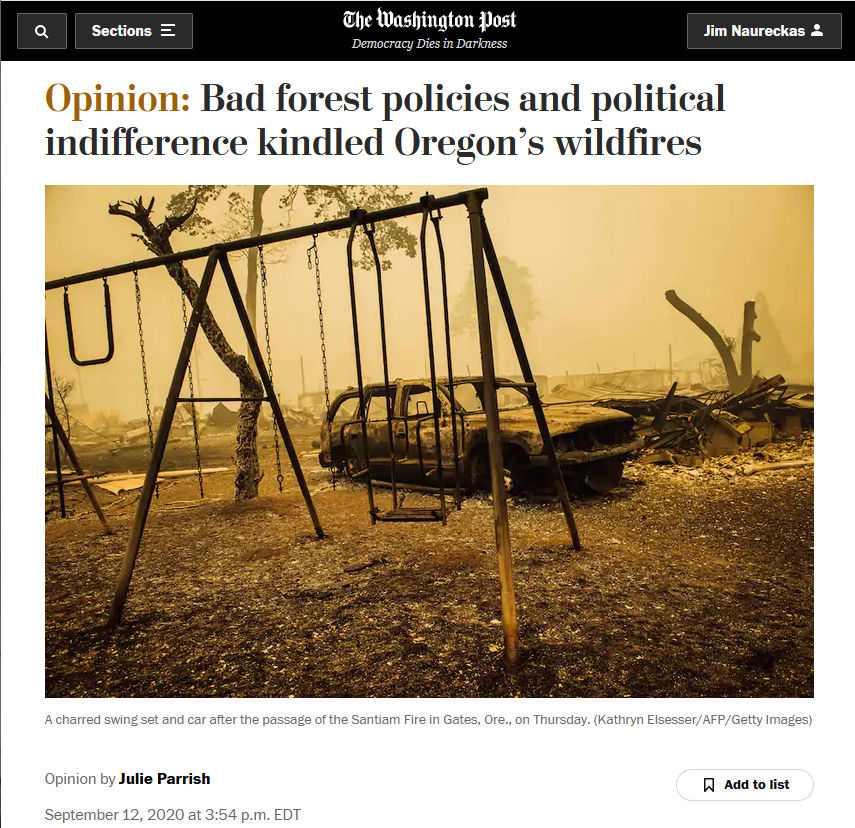 Face the Nation asked only two questions referencing the climate crisis the entire year. In the first, CBS host Margaret Brennan (9/13/20) challenged Oregon Gov. Kate Brown's statement that the wildfires were "a wake-up call for all of us that we have got to do everything in our power to tackle climate change." Brennan responded:

Governor, I understand that's your conviction. But I know four former Oregon lawmakers have written an op-ed in the Washington Post, though, saying you can't blame climate change. Instead, it's a failure of your state government to prepare, and that warnings were ignored regarding mismanagement of Oregon's forests. What is your response to that?

Brennan presented climate disruption's role in wildfires as a mere "conviction" of her guest–not because there was scientific evidence that questioned the connection, but on the basis of an op-ed (Washington Post, 9/12/20) written by a former Republican state representative (not four of them) who's now associated with a pro-logging group funded by corporate timber interests and linked to far-right militias (Mother Jones, 3/6/20).

In the other question, Brennan (11/8/20) asked West Virginia Sen. Joe Manchin if Joe Biden's "energy message"—which featured a vow to transition away from oil and gas—hurt him in the election.

NBC asked three questions, ABC and Fox News asked four, and CNN asked 13 in their Sunday morning shows. The five shows combined aired a total of only 18 segments in which any questions were asked that referenced the climate crisis. There were 26 questions asked, to 18 guests.

The Sunday shows historically skew overwhelmingly toward official sources—politicians, party operatives and other current or former government officials—who typically account for half or more (FAIR.org, 4/1/12, 5/22/20) of all guests, with journalists making up most of the rest. In 2020, questions about climate skewed even more toward partisan guests, who accounted for all but two of the sources, and received 24 of the 26 questions. (The other two, both on Fox News Sunday, were an actor and a conservative pundit.)

Last April, when there was a crucial role for news outlets to play in clarifying the medical and scientific aspects of the Covid crisis, as well as offering space for vigorous debate over solutions, FAIR (5/22/20) criticized the Sunday shows for sidelining independent public health experts, who comprised only 10% of all guests that month. On climate, however, the shows have proved even worse, inviting not a single climate scientist or other climate expert or advocate as a guest over the entire year.

Of the partisan guests asked about climate issues, 12 were Democrats and only three were Republicans (taking 17 versus seven questions, respectively), despite the fact that Republicans dominated Washington for the year, holding both the White House and Senate and blocking any major climate change legislation. In fact, the ABC, CBS, NBC and Fox News Sunday shows didn't pose a single question about the climate crisis to a Republican politician the entire year.

In effect, these shows are allowing politicians to define reality. If Republicans say the climate crisis doesn't exist, then Sunday hosts—with the exception of CNN—don't question them about it.

Twelve of the 18 segments centered on the US presidential election or the subsequent presidential transition, five were about the West Coast wildfires and Hurricane Laura, and one was a feature about an actor whose climate activism came up in a question. 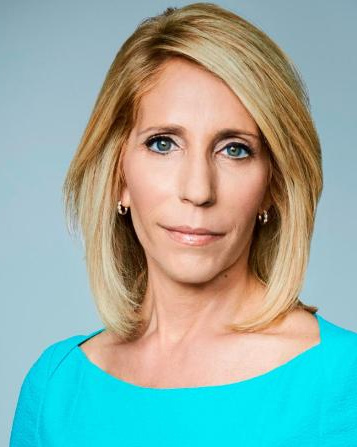 All but one of the 10 climate-related questions in the extreme weather segments were about whether climate change is an important contributor to extreme weather events of 2020, or whether humans are the main driver of that climate change—questions that have long been settled science. CNN (8/30/20, 9/13/20) posed several such questions to two Republican climate deniers, and the network's Dana Bash (8/30/20) stated clearly multiple times in her interview some variation of "the overwhelming scientific consensus is that human activity is responsible for the climate crisis." While holding Republicans accountable for their climate denial stance is important, it's also important to go beyond settled science and press them on policy. But with so few questions to Republicans at all, none did so.

What's more, three Democrats were also asked whether climate change could be blamed for the West Coast wildfires (ABC, 9/13/20; CBS, 9/13/20; CNN, 9/13/20), letting then–President Donald Trump frame the news with his claims that it was simply a "forest management" problem, rather than doing what they ought to have done: set the record straight on what the science says about the role of climate change in wildfires, then use their questions to ask their political guests about government responses based on those scientific facts.

If we have any hope of addressing the climate crisis, journalists have to move beyond debating its existence or importance, and start looking at both its causes—very concretely, looking at culprits—and its solutions. You can't debate climate solutions without understanding what is driving climate change, yet only 12 questions were asked on the Sunday shows all year that even touched on emissions or the oil and gas industry, and none mentioned agriculture, deforestation or capitalism more generally. 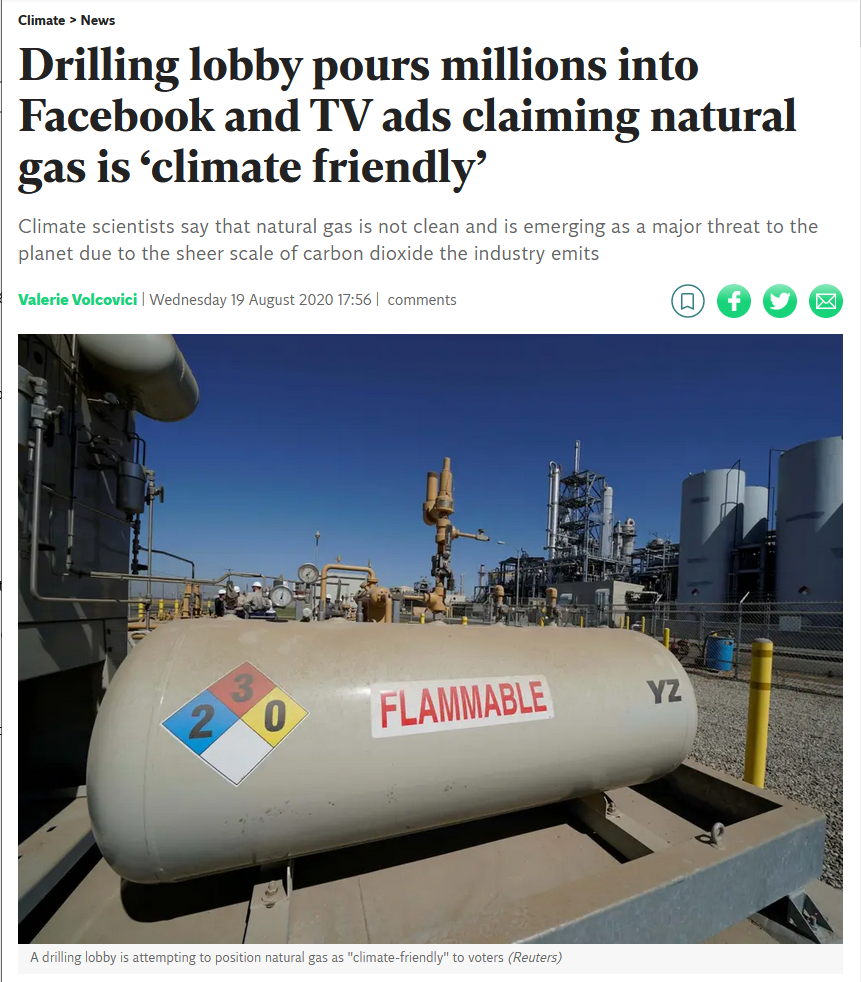 Of those 12 questions, few got the national conversation closer to where it needs to be, instead asking about such things as whether Biden's goal of net zero emissions by 2050 was "realistic" (ABC, 9/13/20) or the impact of his stance on oil and gas on voters, not the planet (CNN, 10/25/20; Fox News, 10/25/20). On ABC, host Martha Raddatz (10/25/20) asked Democratic strategist Rahm Emanuel whether Biden's promise in one of the presidential debates to transition away from oil and gas made him "cringe a little bit."

Meanwhile, the industry didn't reduce its own media output during the pandemic; in fact, it increased it. The American Petroleum Institute, the largest industry lobbying group, spent over $3.1 million on TV ads—a 51% increase from the year before—falsely touting natural gas as "clean" energy (Independent, 8/19/20). These ads aired during almost the exact same period (1/1/20–8/16/20) that most of the Sunday shows were completely silent on climate.

We Don't Have a Labor Shortage in the US, We Have a Crisis of Low Wages

Heidi Shierholz
We Don't Have a Labor Shortage in the US, We Have a Crisis of Low Wages
END_OF_DOCUMENT_TOKEN_TO_BE_REPLACED
Connect With Us

END_OF_DOCUMENT_TOKEN_TO_BE_REPLACED

Amidst a brutal Russian crackdown on dissent, 19-year-old Olga Misik - arrested in 2019 for calmly, defiantly reading aloud her country's constitution to a phalanx of glowering riot police at a pro-democracy rally - was just sentenced to two years of parole-like "freedom limitation" for splashing paint at a protest - ie: for "thought crimes." "You know what goes on here," she told the court in a blistering rebuttal. "You wil not suppress the truth."
Read More...
END_OF_DOCUMENT_TOKEN_TO_BE_REPLACED