SUBSCRIBE DONATE
Published on
Thursday, March 18, 2021
by
Fairness and Accuracy In Reporting (FAIR)

Financial media were all too happy to see a far-right authoritarian gain power, as long as he implemented pro-rich policies.

Former Brazilian President Luiz Inácio Lula da Silva had his political rights restored in a ruling by a justice of the country's Supreme Court on March 8, 2021. (Photo: Fabrice Coffrini/AFP via Getty Images)

The Brazilian Supreme Court this month dismissed all charges against former President Luis Inacio "Lula" da Silva. A towering figure in national politics, Lula was the country's president for eight years between 2003 and 2011. He was later convicted on highly dubious corruption charges and spent 18 months in prison, where his plight drew worldwide attention, making him, in the estimation of Noam Chomsky, the "world's most prominent political prisoner." 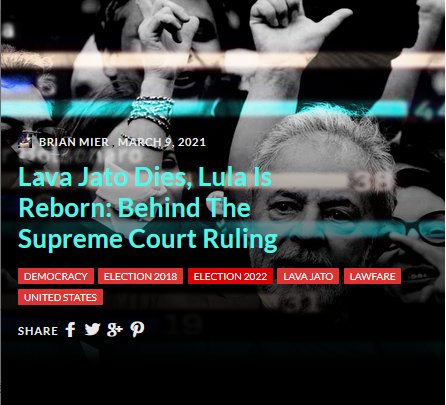 Lula's incarceration directly led to far-right authoritarian Jair Bolsonaro coming to power, as Lula, the overwhelming favoritein the polls, was barred from running against him. Sergio Moro, the judge who imprisoned Lula—and secretly worked with the prosecution to convict him—became President Bolsonaro's justice minister. The journalist who exposed Moro's secret dealings, Glenn Greenwald, was charged with cybercrimes as a result of his reporting. (The charges were later dismissed.)

The Supreme Court's ruling leaves Lula free to run against Bolsonaro in 2022—and gives Brazilians a chance to vote for the leader of their choice. But far from celebrating the news, the financial press is very disappointed that the world's most popular politician is finally free again. "Stock Exchange Loses 4% and Dollar Rises After Lula Charges Annulled," ran Forbes Brasil's headline (3/8/21). "Markets Reacted Badly to the Announcement," wrote the Financial Times (3/8/21). 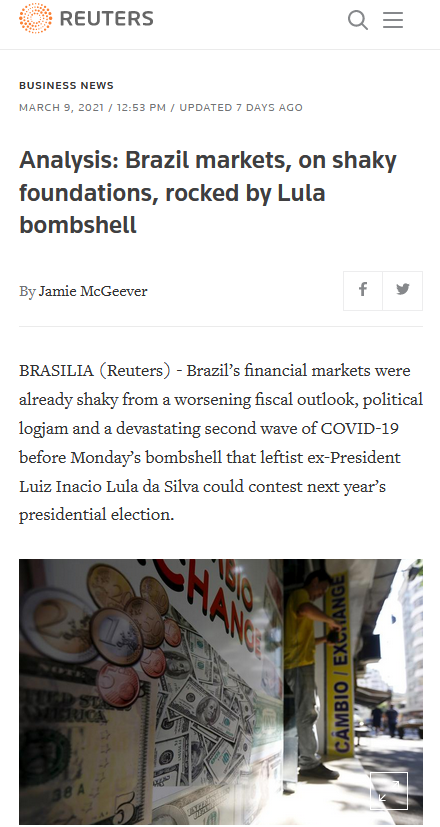 Also seemingly disconsolate at the news was Reuters (3/9/21), who went with "Brazil Markets, on Shaky Foundations, Rocked by Lula Bombshell," telling readers that investors were "gasping for air." The report quoted a former central banker saying that Lula's release would have  "dire consequences." Not for people or democracy—Reuters was not interested in that—but for "asset prices in general."

"Lula's Comeback Adds to Long List of Brazil Investor Woes," read Bloomberg's headline (3/9/21). Its article quoted one consultant warning that Lula "will seek revenge, and he will blame the markets, the media and business leaders for the downfall of the Workers' Party." Why these institutions are not to blame was not explained.

The financial press has long been afraid of what Lula's liberty would mean for the profits of its readers. The "worst-case scenario," Forbes (11/10/19) wrote in 2019, would be if he returned to politics and began "rabble rousing" people against Bolsonaro. What he had already done in undermining confidence in the administration was "deeply irresponsible," reporter Kenneth Rapoza wrote, noting that his criticism of the government that was then imprisoning him merely increased "polarization" and "pain" throughout the country.

A great many articles characterized Lula as "polarizing"—a media codeword used extensivelyin reporting on the Global South, meaning "enacting policies rich people don't like." CNBC(3/8/21), for instance, explained that the decision to drop charges against Lula would "polarize voters,"  and that financial markets were "roiled" by the latest news.

This is in complete contrast to two years ago, when the financial press lauded the election of the fascist Bolsonaro (FAIR.org, 10/31/18). The Financial Times (10/8/18) and CNBC (10/2/18) both noted that markets were "cheering" Bolsonaro's lead in the polls, while Bloomberg (10/30/18) excitedly reported that he would be an "extraordinarily pro-business" president. "Jair Bolsonaro is a dangerous populist, with some good ideas," said the Economist (1/5/19). It was the Wall Street Journal (10/29/18) that went furthest, however, endorsing him as a "credible" "reformer" and an "antidote" to the greed and corruption of Lula's Workers' Party.

Since then, corporate media have cooled on Bolsonaro: not because of his openly declared racism, sexism, homophobia or nostalgia for dictatorship, but mostly because he has failed to fully carry out many of his promised "reforms"—another media codeword for pro-business policies which usually hurt the majority (FAIR.org, 2/16/18, 5/8/16; CounterSpin, 8/28/15, 11/29/18). What Bolsonaro's "reforms" entailed, JP Morgan (12/13/19) helpfully explained: a firesale of state-owned assets, huge cuts to public pensions, tax cuts for the wealthy and wage reductions for state employees. 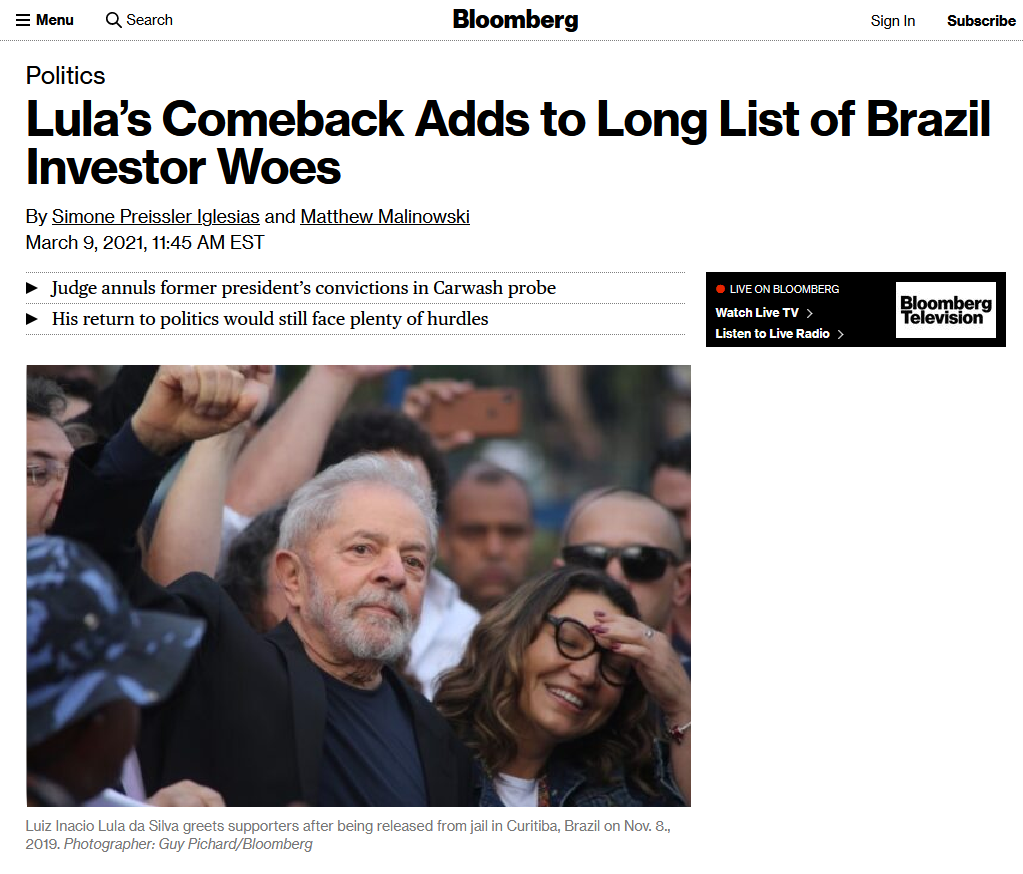 Even worse, Lula's release, the press explained, would close the door on these policies. As CNBC wrote (3/8/21):

Financial analysts said the prospect of Lula candidacy would likely drive Bolsonaro to abandon economic reforms he ran on in 2018 and further embrace populist measures to shore up support.

To decode this: CNBC and others who similarly predicted the end of Bolsonaro's reform agenda (Financial Times, 3/8/21; Bloomberg, 3/9/21, Reuters, 3/9/21), were tacitly admitting that free-market shock therapy is exceptionally unpopular, and has no chance of implementation unless all credible opposition to it is forcefully suppressed.

If this were purely about profits, Lula should not generate such antagonism. "The financial press' hostility and fear is pointless," Brazilian journalist Nathalia Urban told FAIR:

The market performed well with him for the eight years he was president, and with Dilma Rousseff for six years afterwards. If the market wants to make money by investing in production and having a strong consumer market, it has to like a government that has one of its pillars to increase the power of expenditure of the working class.

Instead, it is Lula's position as an independent actor who has consistently stymied US imperial ambitions in Latin America and beyond that is the real problem. Washington was also deeply implicated in his arrest and imprisonment, although corporate media have been hesitant to explore this connection (FAIR.org, 3/8/21).

The dismay over the freeing of the world's most prominent political prisoner illustrates the opposition of the business press to human rights and the rule of law. Financial media were all too happy to see a far-right authoritarian gain power, as long as he implemented pro-rich policies. No matter what the evidence, the press' response suggests they think that they still believe democracy just isn't good for business.

'This Was a Massacre': Brazilian Police Kill Two Dozen in Deadliest Favela Raid in Rio's History

Fascism's Global Spread Is as Real as the Pandemic's

Joshua Kluever
In the United States, Democratic Socialism Can Win
END_OF_DOCUMENT_TOKEN_TO_BE_REPLACED
Connect With Us

END_OF_DOCUMENT_TOKEN_TO_BE_REPLACED

What else would you expect these convulsive days. This weekend, a massive out-of-control Chinese rocket is hurtling back to Earth while much of the world wonders, with a mix of anxiety and sheesh-what-next resignation, just where it will land and if they'll be under it. Amidst the apocalyptic bingo card gags and forecasts - Partly cloudy with a chance of rocket - many have proposed, in the name of karma, the perfect, poetic landing site. Oh please.
Read More...
END_OF_DOCUMENT_TOKEN_TO_BE_REPLACED