SUBSCRIBE DONATE
Published on
Friday, February 19, 2021
by
The Conversation

National Guard Citizen-soldiers stand in formation after a U.S. Capitol tour on January 23, 2021 in Washington, DC. Due to COVID-19, Capitol tours had been restricted since March 13, 2020, but have exclusively been reopened for National Guard members. (Photo by Brandon Bell/Getty Images)

The Pentagon has approved leaving 5,000 troops deployed indefinitely to protect the U.S. Capitol from domestic extremist threats, down from about 26,000 deployed after the Jan. 6 insurrection.

The National Guard is a federally funded reserve force of the U.S. Army or Air Force based in states. These part-time citizen soldiers typically hold civilian jobs but can be activated by state governors or the president to respond to natural disasters, health emergencies or violent protests, or to support military operations overseas. Although many Americans are skeptical of any military response to civilian unrest, the National Guard is widely seen as a reliable peacekeeping force.

It wasn’t always this way. The National Guard has a complicated history of responding to civil disturbances.

History of the National Guard

Because of post-Revolutionary fears over the cost and potential tyranny of a standing army, the Constitution authorized citizens to form militias that would “execute the Laws of the Union, suppress Insurrections and repel Invasions.”

Subsequent militia acts confirmed state authority over the militia with responsibility as a national military reserve for defense and peacekeeping. By the 19th century, local militias were almost everywhere, but they varied widely in mandate and quality.

In the South, militias – once used to hunt down escaped slaves – continued to enforce white supremacy after the Civil War, attacking Republican politicians and killing Black voters.

Meanwhile, in fits and starts, New York’s militias were becoming well funded, trained and regulated, as, increasingly, were those in the Midwest.

By the late 19th century, state and local militias were regularly being used to respond to civil disorder.

Still, when more than 100,000 workers across the U.S. protested wage cuts by walking off the job for up to six weeks in what was called the Great Labor Strikes of 1877, state and city officials throughout the country hesitated to call out their militias to reopen the railroads.

According to my historical research, officials feared that militiamen might sympathize with the workers’ uprising. Secretary of War George McCrary was among them. In a report that year, he argued that the Army was more dependable in strikes than local militias.

“Uprisings enlist in a greater or less degree the sympathy of the communities in which they occur,” he argued, calling local militia “unreliable in such an emergency.”

The state militias also lacked uniform discipline, centralized command structure and tactical training. Many militiamen hated being deployed on labor strike or riot duty within their own communities. They did not want to be seen as pawns of big business, and unions increasingly prohibited their members from joining militias.

The 1877 labor strikes highlighted the need for well-trained state militias with clear mandates. State legislatures began to ramp up funding for militias, which came to be called the National Guard.

Over the next half-century, the Guard’s role as a viable federal reserve to the U.S. Army, under the control of the War Department, became federally codified. Between 1900 and 1915, the U.S. government invested US$60 million for National Guard training, weapons and soldier pay.

By the 1960s, the National Guard had an annual budget nearing $950 million. Between 1965 and 1971, the Army National Guard was deployed 260 times to maintain order during urban and anti-war civil disturbances such as those following the death of Martin Luther King Jr.

But the National Guard was still predominantly white and male, and its discipline and training again came under scrutiny during the era’s racial uprisings.

In 1967, inexperienced National Guard troops with as little as six hours of riot training were deployed to racial uprisings by Black residents in Detroit and in Newark, New Jersey. Rather than keep the peace, they responded with lethal force. Of 43 deaths in Detroit’s five days of protests, Guardsmen were responsible for at least nine. One victim was 4-year-old Tonia Blanding, who was killed on July 26, 1967, when Guardsmen shot into her apartment building based on rumors of snipers.

In Newark, then-police director Dominick Spina condemned the untrained Guardsmen for creating a “state of hysteria” in his city during demonstrations in July 1967 following rumors that a Black man had been killed in police custody.

President Lyndon B. Johnson formed the National Advisory Commission on Civil Disorders, known as the Kerner Commission, to investigate 1967’s civil unrest. The commission’s report urged the federal government to develop guidelines governing riot control and fund research into such alternatives to lethal weapons as tear gas and sound cannons, which were pursued.

On May 4, 1970, National Guardsmen responded to student anti-war protests at Kent State University in Ohio. When the soldiers ran out of tear gas, students threw bricks and bottles at them. The soldiers opened fire, killing four students and injuring nine. 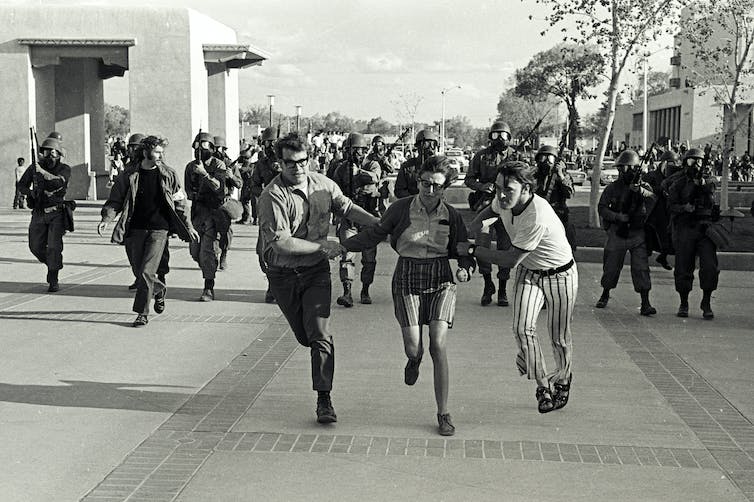 Some Americans supported the Guard’s actions at Kent State, while others were anguished. President Richard Nixon’s Commission on Campus Unrest argued in its September 1970 report that “even if the guardsmen faced danger, it was not a danger that called for lethal force.”

“The Kent State tragedy must mark the last time that … loaded rifles are issued to guardsmen confronting student demonstrators,” the report concluded.

The outcry over civilian deaths in Detroit, Newark, Kent State and elsewhere resulted in changes to the National Guard.

Guardsmen were given more protective equipment and trained in nonlethal methods of crowd control. In the past 50 years, the National Guard has also grown into a more diverse force. Today, nearly 20% of the Guard members are women and 25% are people of color.

Today, government leaders and civilians see the National Guard as a reliable force for emergency responses of all kinds, from disaster relief to delivering COVID-19 vaccinations.

But the future may hold more troubles. Recent investigations into white supremacist infiltration of the military and police prompted closer scrutiny of National Guard troops. Two members were removed from duty protecting the presidential inauguration because of links with extremist organizations.

Remembering W.E.B. Du Bois: A Giant in the Struggle for Black Freedom in the US

Why the Amazon Worker Vote in Bessemer Means So Much
More in:
War & Peace, U.S.
,
Militarism, Labor, Civil Rights, US Military

Tara Lohan
Sounds of Silence: Extinction Is Erasing the Earth’s Music
END_OF_DOCUMENT_TOKEN_TO_BE_REPLACED
Connect With Us

END_OF_DOCUMENT_TOKEN_TO_BE_REPLACED

Marking this year's International Women's Day - which should, duh, be every day - were home care workers fighting for decent pay, Latinx women combating gender violence, tributes to women in STEM, sports, racial justice work, our own pasts - "I am because they were" - and companies trying to make a trashy buck: Burger Queen For A Day! Most aptly for an event born of bread-and-roses women labor activists seeking equal treatment, the day sparked calls to raise the damn minimum wage.
Read More...
END_OF_DOCUMENT_TOKEN_TO_BE_REPLACED