SUBSCRIBE DONATE
Published on
Wednesday, February 17, 2021
by
The Progressive

We Must Give Power to the People Most Affected by Climate Change, While Also Disrupting the Capitalist System

In her new book, Shalanda Baker, President Biden’s choice for Deputy Director of Energy Justice, emphasizes the need for an urgent and equitable response.

In the fight against climate change, there is often a false assumption that we are all equally responsible for environmental devastation and that individual lifestyle changes alone are enough to avert ecological collapse.

We must rethink the energy infrastructure itself, forefronting those who have been most harmed by climate change and the energy industry: people of color, Black folks, Indigenous communities, and low-income people.

We are not going to recycle our way out of disaster. Collective action and drastic, sweeping policy changes are necessary to reverse the course we’re on.

In her new book, Revolutionary Power: An Activist’s Guide to the Energy Transition, professor of law and climate equity researcher Shalanda H. Baker emphasizes this need for urgency in combating climate change. But she also argues that, while replacing fossil fuels with renewable energy may extend Earth’s habitable life, simply swapping out one kind of power for another will not end the underlying problem of environmental injustice. 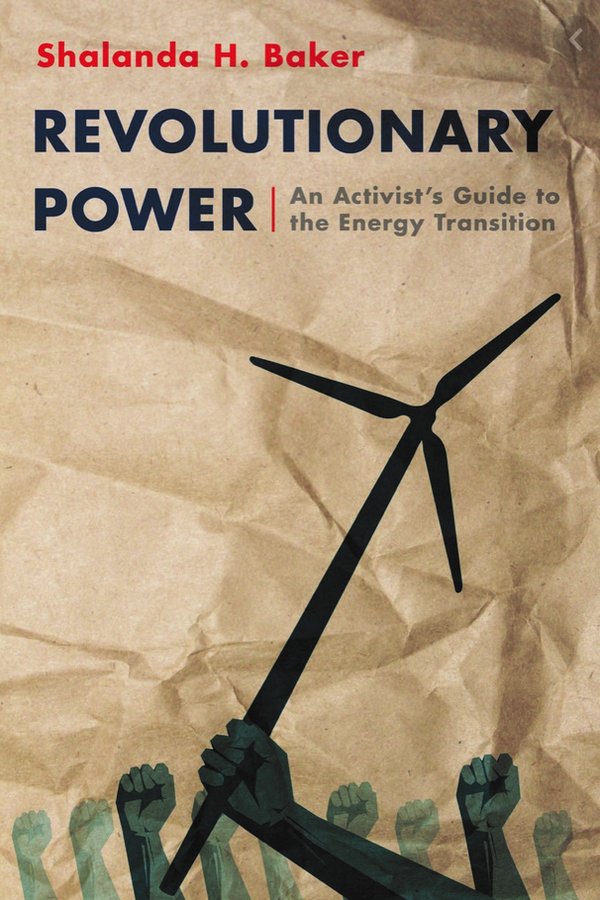 To do that, Baker contends, we must rethink the energy infrastructure itself, forefronting those who have been most harmed by climate change and the energy industry: people of color, Black folks, Indigenous communities, and low-income people.

In late January, the U.S. Department of Energy announced that Baker will serve as the organization’s first Deputy Director for Energy Justice, a position created by President Joe Biden to address systemic climate injustice. Her book amply sheds light on why that is a good idea.

Part personal narrative, part activist’s guidebook, Revolutionary Power promotes what Baker calls a “justice first” approach to averting climate disaster. As she writes in the introduction, “We did not collectively share in the creation of this devastation, and we will not share equally in its impacts.”

This idea undergirds the entire book. Interweaving her own lived experiences with case studies from around the United States, Baker illustrates the ways in which we are already feeling the effects of climate change unequally. She points to obvious examples like 2017 Hurricanes Maria and Harvey, which disproportionately impacted poor communities of color, and the 2018 California Camp Fire caused by Pacific Gas and Electric’s dilapidated equipment, which burned the working class town of Paradise (where my grandmother lived) to the ground.

She also identifies instances of environmental oppression including “sacrifice zones.” In oil-rich Port Arthur, Texas, for example, cancer is much more common than in other parts of the country, with a 2017 NAACP report indicating the cancer mortality rate for Black residents of the town is nearly 40 percent higher than the state average. Toxic waste dumps and oil pipelines are also frequently located near Indigenous lands, leaving Native people sick and their land, polluted.

As the 2016 documentary Blood on the Mountain explored, the West Virginia coal mining industry has literally blasted the tops of mountains, sickening white working class communities with black lung disease and poisoning their water. The list goes on.

Revolutionary Power is a hopeful book—as Baker said in a recent interview with WBUR, “It’s not inevitable that [the climate future] will be unjust.”

As we’re confronted with the fallout from human-caused climate change and embark on the journey to switch to clean energy, Baker sees opportunity for revolution. While the most vulnerable among us have suffered the most as a result of climate injustice, they stand to gain the most under a new system, if we create one that is just.

This book moves past theory to demystify the utility sector and focus on action.

She writes, “Each aspect of the energy system is up for grabs in the transition: the determination of who owns our energy resources and can access economic benefits attached to them.”

Chapters two through six—the guidebook portion of Revolutionary Power—focus solely on the electricity sector, and on literal and figurative power. In these pages, Baker breaks down the existing utility models for readers (investor-owned, publicly owned, and cooperatives), and advocates for decentralized community-owned and managed models. She explores the systemic dismantling of rooftop solar programs in the United States, just as they are becoming more affordable for low- to medium-income ratepayers. She critiques what she calls “climate change fundamentalism,” or the tendency to “focus myopically on climate change mitigation at the expense of social justice concerns.”

These sections are jargon-heavy and get deep into the weeds of energy reform. But while the book’s middle chapters are not always easy to read, they accurately reflect how challenging and involved organizing for justice-forward climate policy is. Many people want utility reform and an energy sector that is both clean and just, but details on how to actually do it are often fuzzy.

In Revolutionary Power, Baker offers a clear path forward, unafraid to get into the necessary nitty gritty of how to achieve such a monumental shift.

She cites an American Public Power Association guide for how to take steps in your own community to organize for locally owned and controlled power. She points activists and policymakers seeking to incorporate equity into climate legislation to the grassroots toolkit “Comprehensive Building Blocks for a Regenerative and Just 100 Percent Policy.” In short, this book moves past theory to demystify the utility sector and focus on action.

However, as actionable as Revolutionary Power is, it’s also deeply radical. Baker understands that when addressing climate change, it’s imperative to also discuss capitalism. In chapter three, she quotes Energy Democracy: Advancing Equity in Clean Energy Solutions by Denise Fairchild and Al Weinrub, affirming the authors’ assessment: “Transitioning to a non-fossil, renewable energy base . . . does not impact the growth imperative of the capitalist system nor stop Wall Street and the largest U.S. corporations from extracting wealth from working people. . . . Decarbonizing this economic system extends its life.”

In other words, switching out one energy source for another without challenging the capitalist system itself actually strengthens it. The only way to ensure a more just future, Baker argues, is to disrupt our current social and economic structures while we transition to clean energy.

When thinking about the leader best suited to helm the charge for such a drastic transformation,  Biden is perhaps not the first person who comes to mind. A longtime centrist, Biden has historically championed slow, incremental change, or upheld the status quo—during his presidential campaign, he wavered on whether he supported banning fracking, for instance.

While many climate activists rightfully mistrust the Biden Administration’s ability—and desire—to act fast on climate change, if Revolutionary Power is any indication, Baker’s appointment to a key energy position is reason for hope.

Rebecca Long is a Boston-based writer and editor whose work has appeared in The Guardian, The Boston Globe, VICE, Bitch Media, Polygon, Elemental, and others. You can connect with her on Twitter @bex_long or rebeccaclong.com.

Biden’s Reckless Syria Bombing Is Not the Diplomacy He Promised

END_OF_DOCUMENT_TOKEN_TO_BE_REPLACED

CPAC 2021! Wingnut City! Its first day of lunacy featured Ted 'Braveheart' Cruz shrieking "FREEDOM!" and Kimberly 'THE BEST IS YET TO COME!" Guilfoyle yelling "communists want to see our nation burn" and an SS-insignia-shaped stage, but the highlight was when they broke out the Golden Calf, a gold Trump statue in stars-and-stripes shorts with a magic wand, because somehow all these Christians never got to the part in the Bible about false idols. Who are these people and can they leave soon?
Read More...
END_OF_DOCUMENT_TOKEN_TO_BE_REPLACED