SUBSCRIBE DONATE
Published on
Thursday, February 11, 2021
by
Fairness and Accuracy In Reporting (FAIR)

For all the calm Psaki is bringing into the White House press room after a four-year circus, as State Department spokesperson it was her job to justify the most imperial aspects of the Obama administration’s foreign policy.

One arena of US executive power that the media establishment is glad to have return to its pre-Trump mode is White House press relations, embodied in Joe Biden press secretary Jen Psaki. Former President Donald Trump’s press secretaries, like Sean Spicer with his iffy Holocaust history (Vox, 4/11/17) and mendacious Kayleigh McEnany (Vanity Fair, 1/26/21), turned any given White House press conference into a Terry Gilliam fever dream. Any spokesperson for the new administration might seem like a bit of fresh air after such lunacy. But let’s be cautious. 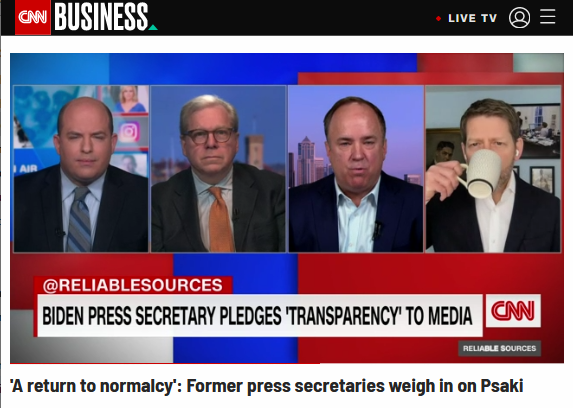 There has certainly been corporate media fanfare over what journalists call a return to normal in White House press conferences with Psaki (CNN’s Reliable Sources, 1/24/21; New York Times, 1/20/21; Independent, 1/29/21). In a friendly interview, Rachel Maddow (MSNBC, 1/29/21) told Psaki: “The presentation that we are hearing from you in the briefing room…. I feel like it’s too nice,” which elicited a laugh from Psaki. Maddow said, “I believe you are telling the truth,” a validation of Psaki’s promise to bring “transparency and truth” back to executive briefings (Daily Mail, 1/20/21). 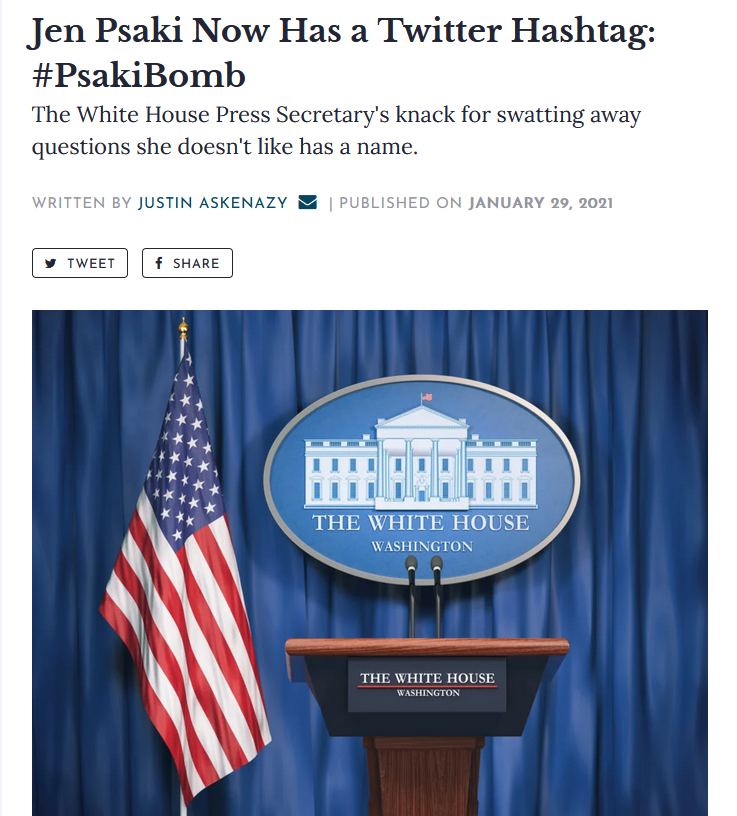 As Vogue (1/29/21) framed it, “It’s clear than her largely nonconfrontational style in the press briefing room is making an impact.” But at the same time, Psaki has “proved skilled at the art of the pushback—so far doing it calmly and respectfully.”

With glee, Washingtonian (1/29/21) pointed out Psaki’s online fans have created the phase “Psaki bomb,” a reference to her “ability to subtly smack down questions she finds frivolous.” Some of those questions—on topics ranging from the second Trump impeachment to Rep. Marjorie Taylor Greene to Biden’s masking lapses to the GameStop stock saga—may or may not be trivial, but it’s disconcerting to see journalists celebrating the use of executive power to shut down journalistic inquisitiveness.

Psaki is a seasoned Democratic Party press operative. As the Center for Responsive Politics notes, she worked for various high-level Democrats before joining Barack Obama’s 2008 presidential campaign as a deputy press secretary. She rose quickly and worked in the White House after Obama’s victory. 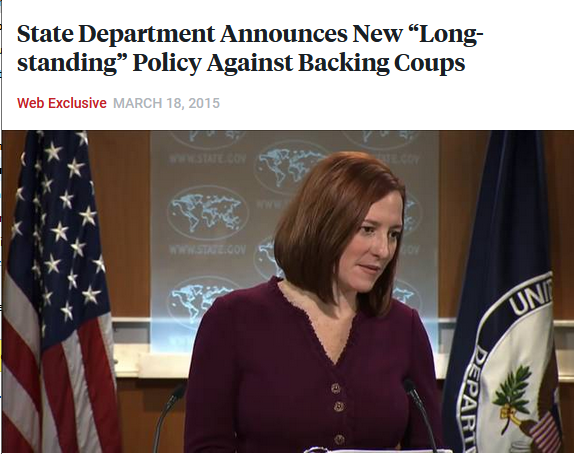 Reporters would be well served by a trip down memory lane, particularly Psaki’s tenure as State Department spokesperson and her confrontations with AP diplomatic correspondent Matt Lee. Among the most egregious claims she made in press briefings was, in reference to Venezuela (Democracy Now!, 3/18/15), “As a matter of longstanding policy, the United States does not support political transitions by non-constitutional means.” As Lee pointed out, this is clearly untrue: In Latin America alone, the US has successfully overthrown governments at least 41 times between 1898 and 1994. In true Monroe Doctrine fashion, Psaki justified sanctions against Venezuela as an effort to “persuade” its socialist government to “change their behavior” (Al Jazeera, 3/12/15).

In the Mideast, she refused to declare the military overthrow of democratically elected Egyptian President Mohamed Morsi to be a coup: “We have determined that we do not need to make a determination.” (Washington Free Beacon, 8/6/13). She was caught on a hot mic complaining that the department’s line on the acquittal of Egyptian ex-strongman Hosni Mubarak was “ridiculous” (RT, 12/5/14) after taking heat from Lee and other reporters on the subject. Lee had called Psaki out for refusing to take a position on a gross miscarriage of justice in a country central to US foreign policy in the Middle East.

Lee also pushed her on her department’s failure to commit to general transparency (Real Clear Politics, 2/3/15). Other fiery confrontations made headlines (Washington Post, 4/22/14).

For all the calm Psaki is bringing into the White House press room after a four-year circus, as State Department spokesperson it was her job to justify the most imperial aspects of the Obama administration’s foreign policy. Now she’s standing between the press and a president who previously served in that same administration as second-in-command.

The fawning coverage of Psaki’s performance suggests some in the press have forgotten that press secretaries at the highest levels of government are not friends of free discourse. They are meant to deflect questions and use ambiguity to provide quotable snippets to fill newspaper pages, but that don’t actually inform the public about the inner workings of the government. Whether they serve a president, a governor or a mayor, executive press secretaries are not servants of the press or the public. Instead, they serve to protect their employer from bad news and to promote their employer’s initiatives in a positive light. Reporters, in a press secretary’s eyes, are either to be manipulated or deceived. “Spin doctor” is not meant to be a compliment. 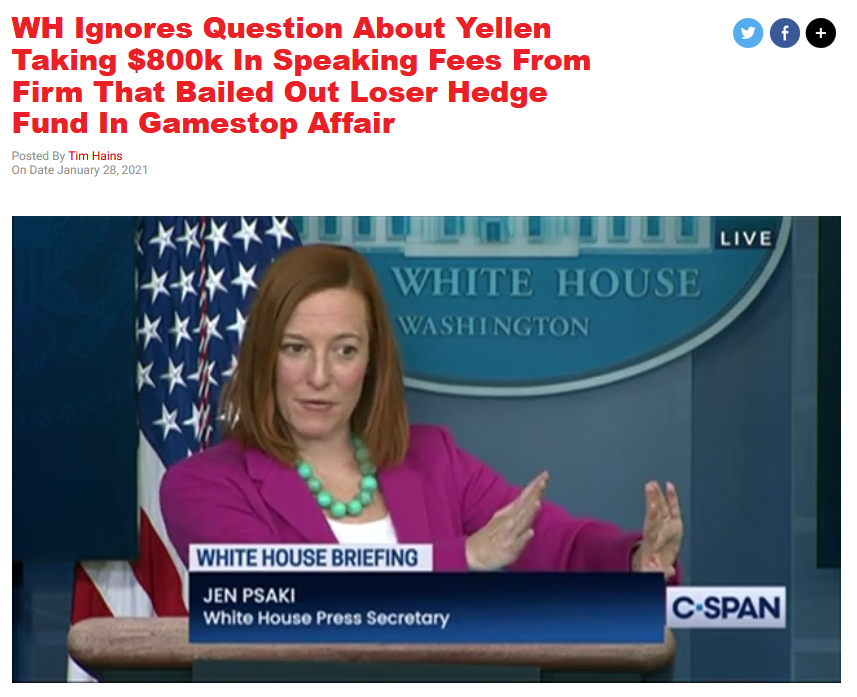 To illustrate the problem: Psaki recently batted down a question about whether Treasury Secretary Janet Yellen taking more than $800,000 in speaking fees from Citadel, the trading firm that bailed one of the hedge funds in the GameStop stock spike, posed a possible conflict of interest in her investigation of the market situation. Psaki shot it down, saying that Yellen is an “expert on the economy,” so it “should not be a surprise” that she was highly paid for her advice in the past (Real Clear Politics, 1/28/21). No one doubts that Yellen knows about economics; the question is whether she can be an honest investigator in this particular instance. By highlighting her expertise, Psaki insinuated that the asker was questioning her expert knowledge, when what was at issue was fairness and transparency.

It should not be considered cool or funny that Psaki bats down questions from the press, who are supposed to be a check on the government. If anything, the absurdity of the Trump press conferences should have taught the press to be constantly skeptical of those at the podium, rather than treat them as a chummy ally who has official state power. Rather than making jokes about “Psaki bombs,” Washington reporters would be better off taking their cues from reporters like Lee, and keep her on her toes from now until her last day on the job.

300,000+ Demand Biden Stop Line 3 and Dakota Access Pipelines to 'Secure the Livable Future We All Deserve'

END_OF_DOCUMENT_TOKEN_TO_BE_REPLACED

Because irony is dead and these people are vauntingly shameless, dime-store Goebbels and hate-mongering "son of Nosferatu" Stephen Miller, the ghoul who ripped thousands of terrified immigrant kids from their parents, just went on Fox to call Biden's immigration policies - wait for it - "cruel" and "inhumane," maybe because in their first month lawyers have found 105 of about 600 missing parents. Once they find the rest, and if there's a God, may She please put this creep on trial in The Hague.
Read More...
END_OF_DOCUMENT_TOKEN_TO_BE_REPLACED