How We Came to Build A Progressive Ground Game

After Bernie's campaign ended, we were determined to stay in the fight. We built our own structure which was key in the freedom and guidance in making our actions effective.

We found it very effective to focus on one pressing issue and bring progressive groups together. (Photo courtesy of Sheila Rawat & Elisa Devlin)

"Congressman Raja Krishnamoorthi has raised almost half a million dollars in corporate PAC money from the healthcare industry, the insurance industry and the pharmaceutical industry. On top of that, he's raised more money from health care professionals than all but two members of Congress," said John Kokoris, 8th District Coordinator of Schaumburg Area Progressives at the Patients Over Profits rally on January 9, 2021, where we mobilized over 60 people from around the district to march in solidarity for Medicare for All.

Schaumburg Area Progressives is a grassroots group in the northwest suburbs of Chicago, which evolved from being a local Bernie volunteer group hosting a great deal of campaign events and building a community.

After Bernie's campaign ended, we were determined to stay in the fight. We built our own structure which was key in the freedom and guidance in making our actions effective. We continued the same vision to strive for social, economic, and environmental justice. We see other local and national progressive groups like Democratic Socialists of America and Our Revolution, as allies fighting together for a common cause. Per our organizational structure, we empower other volunteers to become leaders and to develop their own initiative with clear goals and deadlines, while we guide them and help gather resources necessary.

It was critical to have a good program champion like John Kokoris be willing to come forward and take the lead on building a ground game for CD-IL 08. Particularly, he took initiative to collaborate with many other organizations in and around the district, as well as a potential progressive challenger, and this is what is making us successful.

We coordinated a Schaumburg Area Progressives group call with the Congressman, where 5 of us requested his support for Medicare For All and asked him to sign the pledge, to reject campaign contributions over $200 from executives, lobbyists, and PACs affiliated with the hospital, insurance, and pharma corporations. We wrote a letter in response back to him. Following, we organized a Holiday Letter Writing Party where we wrote Congressman Krishnamoorthi over 30 letters sharing personal stories of how this insurance system has negatively affected many of us. We asked him multiple ways to continue the conversation. He still did not get back to us. We also organized a presence at Congressman Krishnamoorthi's townhall where 6 of our volunteers jumped on the call with hours notice, and one of us challenged him on his healthcare stance. It did not change his mind. Days after the new Congress was sworn in, we then went on to plan a Patients Over Profits march, our biggest event yet. 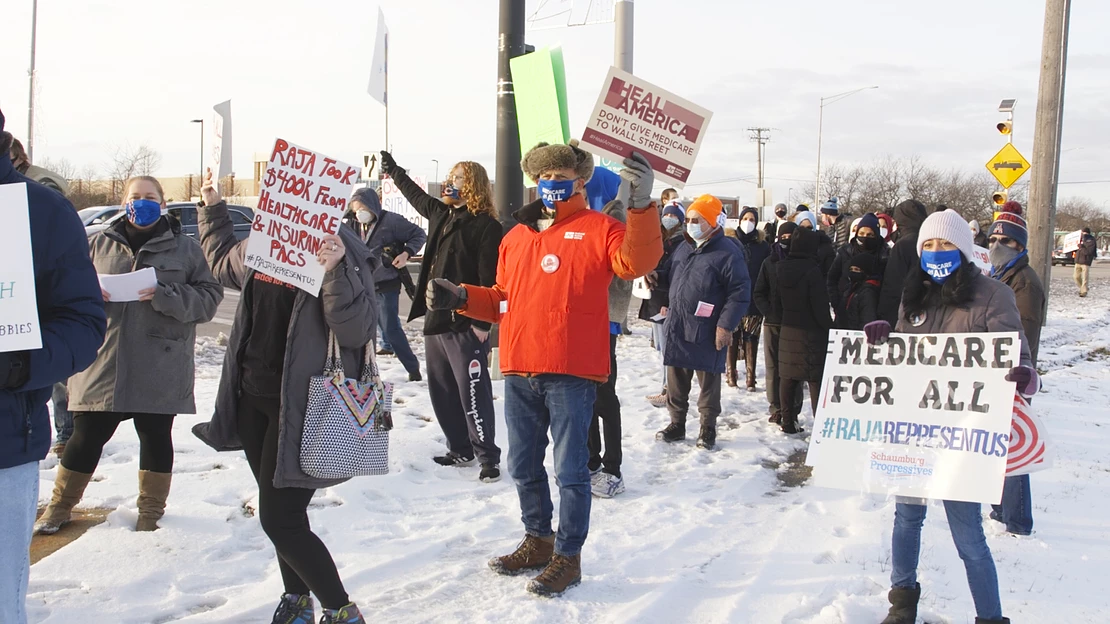 We had powerful speakers share their healthcare stories including Sheila Rawat, Co-Chair of Schaumburg Area Progressives, who said she got surprise bills after a traumatic medical procedure she didn’t want to remember, Ovais Sualeh, a constituent, Dan Bailey, a nurse, who worked at a clinic where specialists only came on a volunteer basis few and far between, which resulted in patients not getting treatment they needed including those who endured intense pain, Hale Landes, a labor activist, Dr. Shannon Rotolo, a pharmacist, and John, the 8th District Coordinator. Undeterred by the cold and snow in the beginning of the winter season, we then marched 0.8 miles to the Congressman’s office, chanting, “Raja, Represent Us!” and “Healthcare is a Human Right!” to hand deliver the Illinois Single Payer Coalition pledge. "We, Schaumburg Area Progressives and our allies, are making our voices loud and clear that the people of the 8th Congressional District are calling on Congressman Raja Krishnamoorthi to sign this pledge and show us that money does not belong in politics," Co-chair Sheila Rawat stated, just outside his office building, moments before Co-chair Elisa Devlin and 8th District Coordinator John Kokoris delivered the pledge.

Schaumburg Area Progressives plans to hold more protests in the coming months, hoping to double the size of the crowd, and if even after that he does not sign the pledge and start advocating for single payer, then we hope to ultimately find and work with a challenger. We found it very effective to focus on one pressing issue and bring progressive groups together. It is our hope that progressive groups in other districts across the nation will follow suit to hold our politicians accountable to the needs of the people. We would love to help other progressive leaders do just that.

Sheila Rawat is a mother of two young children, former teacher, political organizer and ran for delegate for Bernie Sanders. She is Co-chair of Schaumburg Area Progressives.

Elisa Devlin is a highly engaged mother of two, a political activist and organizer, and ran for delegate for Bernie Sanders. She is a Co-chair of Schaumburg Area Progressives.

Danny Glover Explains Why He's in Alabama With Amazon Workers

'Fight Until We Win': Despite Threat of Deadly Force, Hundreds of Thousands Continue Protests Against Myanmar Coup

END_OF_DOCUMENT_TOKEN_TO_BE_REPLACED

CPAC 2021! Wingnut City! Its first day of lunacy featured Ted 'Braveheart' Cruz shrieking "FREEDOM!" and Kimberly 'THE BEST IS YET TO COME!" Guilfoyle yelling "communists want to see our nation burn" and an SS-insignia-shaped stage, but the highlight was when they broke out the Golden Calf, a gold Trump statue in stars-and-stripes shorts with a magic wand, because somehow all these Christians never got to the part in the Bible about false idols. Who are these people and can they leave soon?
Read More...
END_OF_DOCUMENT_TOKEN_TO_BE_REPLACED