SUBSCRIBE DONATE
Published on
Friday, October 23, 2020
by
Fairness and Accuracy In Reporting (FAIR)

A wealth tax as modest as some Democrats are proposing would affect precious few Americans, but still generate trillions of dollars of revenue from people who have largely been increasing their fortunes throughout the pandemic.

That so much of the media are so dead set against the idea suggests whose interests they really serve. (Photo: Erik McGregor/LightRocket via Getty Images)

The coronavirus pandemic has greatly increased wealth inequality in the United States, a key issue in the upcoming presidential election. Polls are currently looking good for the Democrats, many of whom have been murmuring about—or even demanding—a new wealth tax. Recent surveys show the idea is overwhelmingly popular with the electorate, with voters in 11 polled states more than three times as likely to support than oppose a candidate backing a tax on the assets of the wealthy. 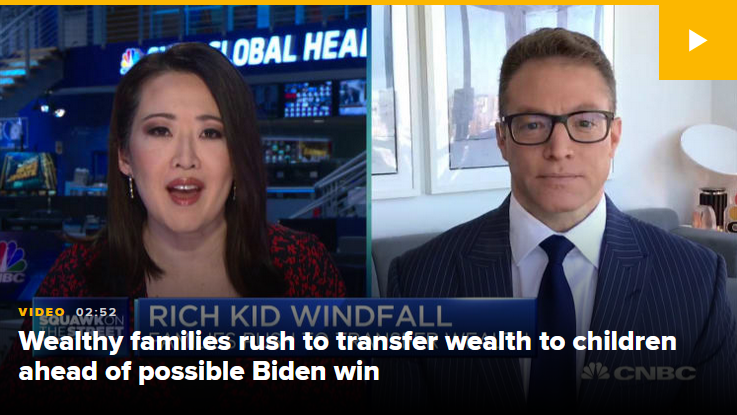 America’s super-rich (who have seen their fortunes surge since the beginning of lockdown) are getting nervous. Last week CNBC (10/14/20) reported that wealthy families are desperately trying to change ownership status of their assets — passing them down to their rich kids — before year’s end, in case of sweeping Biden tax reforms that could lose them millions.

And corporate media—whose owners are overwhelmingly from the class that would be paying a wealth tax—are returning to throw cold water on the idea, after successfully sidelining the candidates who most enthusiastically promoted taxing the wealthy during the Democratic primaries this year.

The primaries put the notion of a wealth tax on the political table, with a number of high-profile candidates, including Bernie Sanders and Elizabeth Warren, proposing one. While the idea was popular with the public (polls show it was strongly supported, with even half of Republican voters backing it), it was not popular with corporate media pundits, who rejected it as a “bad,” “foolhardy” (CNN, 2/17/19) or “terrible” idea (Washington Examiner, 2/15/20), “bad for workers” (Reason, 1/28/20) and an “administrative nightmare” (Time, 1/30/19). 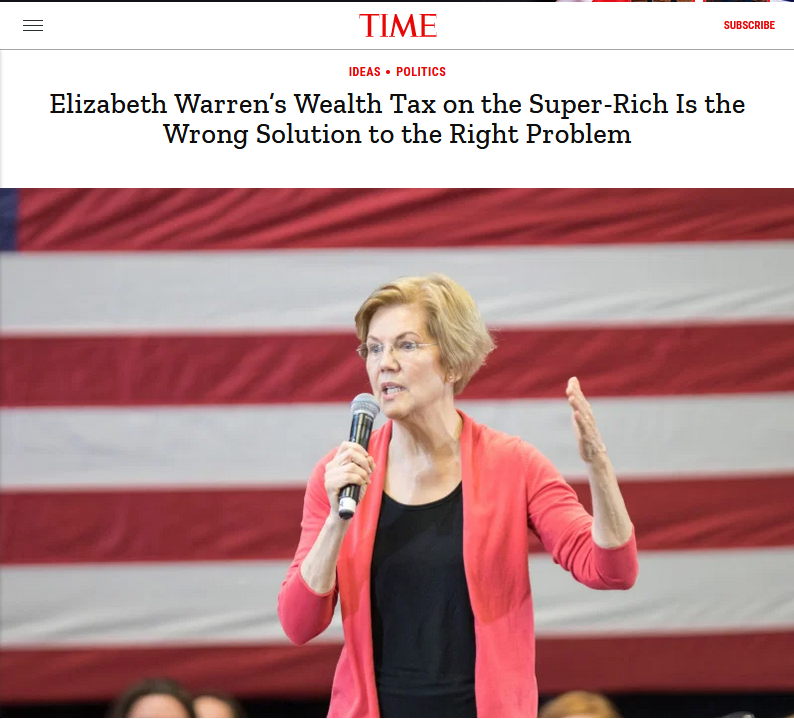 A CNN opinion piece (11/27/19) warned that it would be just plain “wrong” to claim that a wealth tax is a serious solution, based as it is on “voodoo incantations,” and instead suggested a tax cut to address inequality. Fox News (12/31/19) went even further, attacking the idea as a misguided “fantasy,” before presenting its own dream of any wealth tax being found unconstitutional (which, to be fair, the current Supreme Court might well do—particularly with the addition of Amy Coney Barrett).

But at least the pool of interchangeable think tankers and rent-a-pundits pretended to believe inequality is a real problem that they want to fix. Before the great crash of 2008, corporate media were cheerleaders of inequality, the standard line being that it is nothing to worry about, or even a good thing for society (Extra!, 9–10/07).

The press have now moved one step along, claiming they really do want to solve the inequality issue, only directly addressing it through redistribution won’t work. Thus a CNN op-ed (11/19/19) argued: “Rising income inequality is indeed a problem for economic growth. But taxing wealth could exacerbate the problem, not fix it.” The authors, two staffers at the right-wing Illinois Policy Institute, claimed that seizing assets from “the world’s best allocators of capital” would stifle innovation and inevitably hurt workers.

There has been a limited amount of positive coverage of any potential wealth tax. The New York Times (4/21/20), for instance, claimed a one-off Covid-19 solidarity assessment on the wealthy would “help prove that we are all in this together.” But this was a break from the normal negativity that claimed it would be too hard to implement (New York Times, 11/15/19) or simply unconstitutional and dishonest (New York Times, 1/24/20).

Joe Biden is not proposing any specific wealth tax. The former vice president even began his campaign explicitly reassuring wealthy donors that “nothing would fundamentally change” under his presidency. “I need you very badly,” he told them. Yet even with Sanders and Warren defeated, America’s rich are worrying that a President Biden would be swayed by progressive forces in his party.

As a result, the concept has again become a talking point for the media in recent weeks. And like last time, the tone is overwhelmingly hostile. Thus, a wealth tax simply “won’t work” (Daily Telegraph, 10/6/20), creates “false expectations” (Toronto Sun, 9/22/20) or might cost more to administer than it would bring in (Spectator, 10/8/20). “A wealth tax is not a solution for income inequality,” insists Forbes (9/29/20), a magazine most noted for its glorification of billionaires, claiming it is a “policy driven by spite” against the rich, and would somehow “make everyone—rich and poor—worse off.” 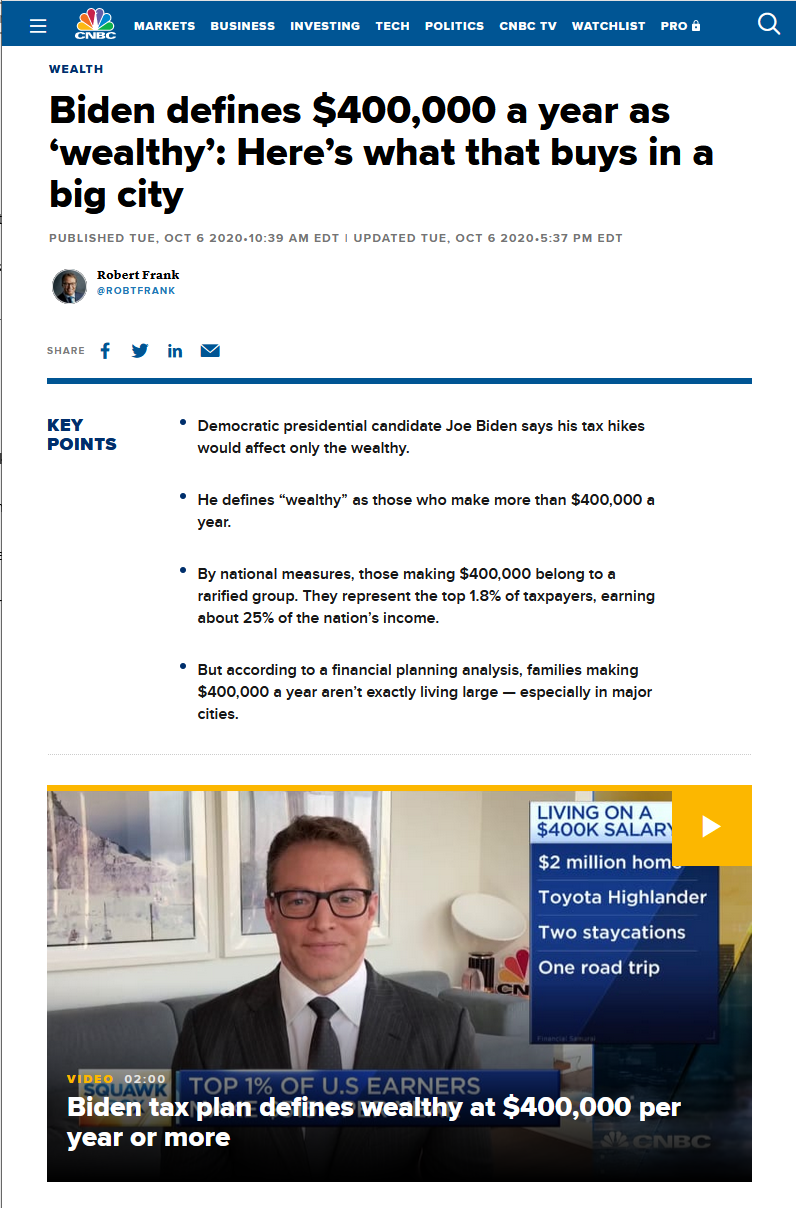 Perhaps CNBC (10/6/20) went with the most galaxy-brained line of attack. Biden’s plans categorize anyone in the top 1.8% of income (making $400,000+ annually) as “wealthy.” But those poor souls earning just $400,000 per year “aren’t exactly living large,” CNBC insisted,  finding “experts” willing to claim that that sort of annual income only provided a “relatively middle-class lifestyle” in much of the country. Why, they might only be able to afford three  “modest” family vacations per year.

CNBC (9/23/20) also recently sat down with JP Morgan CEO Jamie Dimon, uncritically parroting his line that any wealth tax would be “extremely complicated” and “almost impossible,” an interview that was picked up and amplified across the media (e.g., The Hill, 9/23/20; New York Post, 9/23/20; MSN, 9/23/20; Forbes, 9/23/20). Wow, who would have thought that a billionaire investment banker would oppose a wealth tax! Under even a modest tax hike like Warren’s, Dimon would stand to lose out on tens of millions of dollars annually. Yet this massive, unmissable conflict of interest was not even presented as a problem in these articles, let alone seen as a reason to dismiss his opinion. Rather, he was presented as a neutral expert offering legitimate criticism, rather than a biased actor with a huge amount of skin in the game. In much the same way as reporting that billionaires don’t like socialism is treated as front-page news (FAIR.org, 2/3/20), the super-wealthy being against wealth taxes is apparently also newsworthy.

Ultimately, a wealth tax as modest as some Democrats are proposing would affect precious few Americans, but still generate trillions of dollars of revenue from people who have largely been increasing their fortunes throughout the pandemic. That so much of the media are so dead set against the idea suggests whose interests they really serve.

END_OF_DOCUMENT_TOKEN_TO_BE_REPLACED

Banksy's newest, a two-fer Oscar Wilde tribute and call for prison reform, shows a prisoner climbing down bedsheets ending in a typewriter from Reading Gaol, known for housing Wilde during his two years' hard labor for "gross indecency" - being gay. Video juxtaposes Banky creating it with TV artist Bob Ross burbling about freedom; both are haunted by Wilde's final searing poem about the cruelty and bleakness of life behind bars: "Something was dead in each of us/and what was dead was hope."
Read More...
END_OF_DOCUMENT_TOKEN_TO_BE_REPLACED