SUBSCRIBE DONATE
Published on
Wednesday, April 29, 2020
by
Fairness and Accuracy In Reporting (FAIR)

Both Sides-ing Bleach Injection: Media in the Era of an Incompetent President

To corporate media: It is OK. Facts are facts, even when the president of the United States disagrees. You don’t have to both-sides this one. Injecting bleach is bad.

Unfortunately, for journalists stuck in a corporate media system that promotes deference to authority and finds equivalency even when there is none, the president’s dangerous ramblings need to be treated as legitimate and worthy of discussion, even in apparently adversarial media. (Photo: Tomohiro Ohsumi/Getty Images)

You probably saw Donald Trump’s ridiculous, false and deadly claim last week: that ingesting chemical cleaners could cure humans of the coronavirus. At a White House press briefing on Thursday (4/23/20), the president said:

I see disinfectant, where it knocks it [coronavirus] out in a minute—one minute—and is there a way we can do something like that by injection inside, or almost a cleaning. Because you see it [coronavirus] gets in the lungs and it does a tremendous number on the lungs, so it’d be interesting to check that. 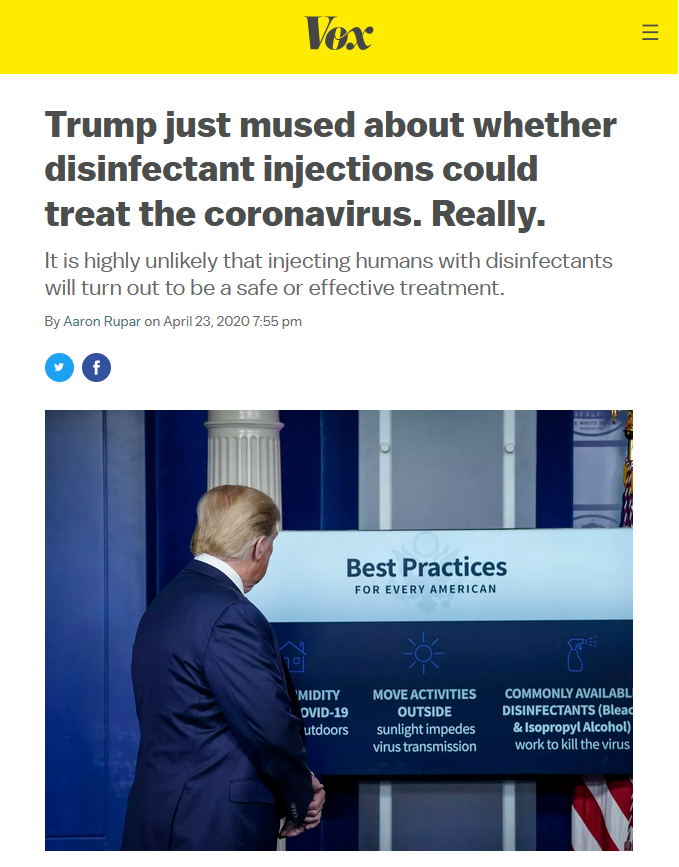 He also suggested that exposing patients to bright lights could help cure them, once again confusing what works on surfaces like tables with the inside of a human body.

It’s worth taking a step back for a second and pausing on the fact that the person in charge of the United States thinks injecting bleach might be a good idea. Trump has consistently spread false information about the pandemic, claiming in February that it would be gone by April due to the warmer weather, and insisting that “we’ll essentially have a flu shot for this in a fairly quick manner.”

His pronouncements have already been fatal: After promoting the drug chloroquine, an Arizona man died and his wife was hospitalized after they ingested fish tank cleaner that contained the substance. Surely more deadly but harder to quantify are his outbursts proclaiming that states should “LIBERATE” themselves from oppressive lockdown measures (some of the lightest in the developed world), encouraging people to go out and demonstrate, thereby spreading the virus.

Unfortunately, for journalists stuck in a corporate media system that promotes deference to authority and finds equivalency even when there is none, the president’s dangerous ramblings need to be treated as legitimate and worthy of discussion, even in apparently adversarial media. Vox (4/23/20), for example, said that it was only “highly unlikely that injecting humans with disinfectants will turn out to be a safe or effective treatment.” The Washington Post (4/24/20) described Trump’s statement as an “unsubstantiated and potentially dangerous” idea. At the risk of stating the obvious, it is not “highly unlikely” but impossible, and Trump’s idea is not merely “potentially” dangerous: No amount of bleach is safe to inject into your body. It will kill human beings, as chemical cleaning product manufacturers immediately warned. (The Post did include a disclaimer: “Do not ingest any bleach or disinfectant.”)

Despite this, USA Today (4/24/20) presented the story as a he-said she-said between two opposing views, describing (4/24/20) Trump’s ludicrous outburst merely as “the latest in a pattern of questionable claims.” “We should inject bleach for our health” is not a “questionable” claim, and would not be treated as such if someone without power or influence made it.

Perhaps the worst offender of phony both-sidesism, however, was the New York Times (4/24/20), which described the president as “eagerly theorizing—dangerously, in the view of some experts—about the powers of sunlight, ultraviolet light and household disinfectants to kill the coronavirus.”

In other words: “Can injecting bleach kill you? On the one hand, definitely yes. On the other, here is a dummy who thinks it will save you from Covid–19, so let’s teach the controversy.” Refusing to state categorically that ingesting known deadly substances is a bad idea, the wording of the Times article suggests that only “some experts” disagree with the idea, while there are other, pro-bleach drinking authorities out there. 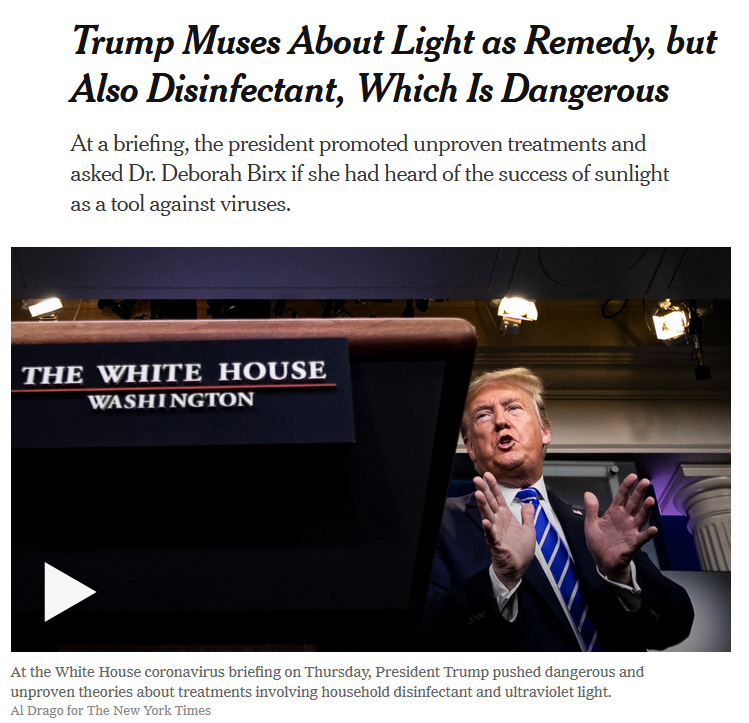 After widespread pushback on social media, the Times amended the offending paragraph, but, if anything, made it worse, changing it to Trump “eagerly theorizing about treatments involving the powers of sunlight, ultraviolet light and household disinfectant that could be harmful if they were used to try to kill the coronavirus.” Injecting bleach “could” be harmful under certain circumstances, but who knows? Certainly not us at the New York Times.

This sort of reporting would be absurd beyond belief in other circumstances involving people without serious power. For example, there were no Times reports stating that, “at the Jonestown camp in Guyana, Rev. Jones eagerly theorized about the benefits of cyanide-laced Kool-Aid that could be harmful in certain circumstances.”

Even CNN’s Anderson Cooper (4/23/20), who has emerged as one of Trump’s most visible and aggressive critics, was anxious not to give an opinion, so strong is the culture of supposed “neutrality” in journalism. He asked his guest, “Is there any evidence about taking a disinfectant that’s used on the table where I’m sitting, and using it internally? That doesn’t seem like a good idea. Am I wrong?”

Cooper, like any adult, knows full well that it is a bad idea, but the spectacle of a CNN anchor asking a doctor about drinking bleach is a bizarre example of what can happen when you combine practices of deference to authority, both-sidesism, and a pretense of neutrality.

The failure of corporate media to call a spade a spade for fear of losing their status as objective arbiters of news has, of late, led to clearly racist actions and statements being laundered as “racially charged” or “racially tinged” or even just “race-related” (FAIR.org, 4/5/19, 11/1/19; CounterSpin, 7/23/19). Likewise, ICE concentration camps are described as “detention centers” (CounterSpin, 1/5/20), which has the effect of making them sound like places unruly school kids who fail to do their homework are sent.

To corporate media: It is OK. Facts are facts, even when the president of the United States disagrees. You don’t have to both-sides this one. Injecting bleach is bad.

END_OF_DOCUMENT_TOKEN_TO_BE_REPLACED

On the third anniversary of a deadly Charlottesville hate fest that saw tiki-torch-bearing white supremacists screaming "Seig Heil!" and "Jews will not replace us!", the sad old racist who crowed about swell people "on both sides" - having upgraded his dog whistle to a scream - was raving about protecting "the suburban housewife" from an "invasion" of black people. Thank God we now have adults in the room; Joe and Kamala entered to Curtis Mayfield's "Move On Up," and slayed it.
Read More...
END_OF_DOCUMENT_TOKEN_TO_BE_REPLACED