SUBSCRIBE DONATE
Published on
Friday, April 03, 2020
by
Fairness and Accuracy In Reporting (FAIR)

The president of the country has declared himself an opponent of one person, one vote democracy. We already knew that, but he said it out loud, on the record.

In a live appearance on the Fox News network (3/30/20), Donald Trump said it was good that Democratic proposals for increased voting protections and ballot access—including vote-by-mail, same-day registration and early voting, as well equipment and staffing to make voting safe during the pandemic—were not included in the coronavirus relief package.

“The things they had in there were crazy,” Trump said. “They had things—levels of voting that, if you ever agreed to it, you’d never have a Republican elected in this country again.” 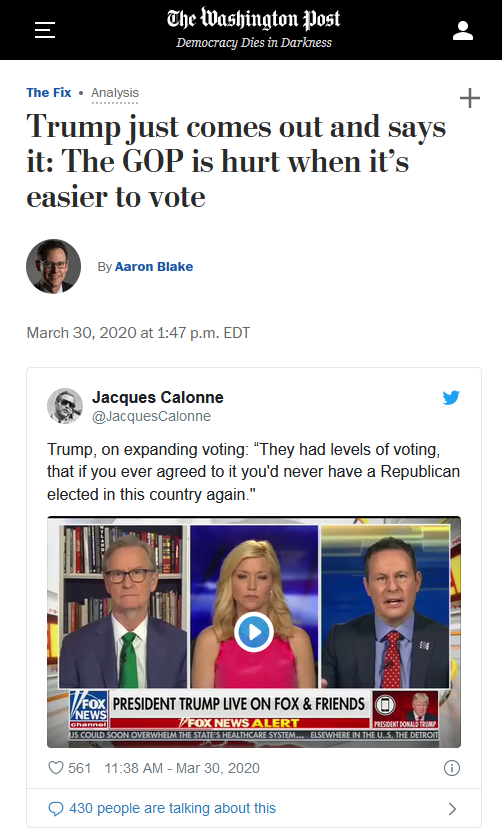 “There is scant evidence of actual large-scale voter fraud in this country,” Aaron Blake (Washington Post, 3/30/20) notes in his 14th paragraph.

If Trump was guilty of saying the quiet part loud, as a number of commentators pointed out, the Washington Post can be charged with saying a straight thing crooked. In the Post‘s March 30 account:

Trump didn’t expand on the thought. But he clearly linked high turnout to Republicans losing elections. The most generous reading of his comment is that he was referring to large-scale voter fraud resulting from the easier vote-by-mail options; Trump has in the past baselessly speculated about millions of fraudulent votes helping Democrats in the 2016 election. The more nefarious reading would be that allowing more people to participate in the process legally would hurt his party because there are more Democratic-leaning voters in the country.

Well, which do you want to be—”generous” or “nefarious”? And baseless speculation about fraud—that’s otherwise known as lying, right? So now the generous reading—not “unreasonable,” but “generous”—is that a person who has lied about this very thing is lying about it again. There had to be a clearer way to get that across.

The reporter, Aaron Blake, would likely say, if asked, that he believes, and thinks readers will take away, that “nefarious” reading. Yet here we have the specter of voter fraud—debunked again and again, including in the Post (e.g., 11/5/18)—being legitimized by consideration. Reporters may think this is tactful, grown-up language, when it’s actually misleading, milquetoast language that does the opposite of what journalism is meant to do—which is clarify issues, break down doublespeak, and help readers understand what’s happening.

Which is that the president of the country has declared himself an opponent of one person, one vote democracy. We already knew that, but he said it out loud, on the record. The thing to do would be to take him at his word, and to assume that his actions have been and will be of a piece with this expressed view. And if you really want to get wild, you might actually be critical of this anti-democratic position, call for resistance to it, and actually platform those who do resist it.

“Democracy dies in darkness,” the Post‘s Trump-era branding tells us. True, but sometimes also in broad daylight, if you smother it with blah blah blah.

Janine Jackson is FAIR's program director and and producer/co-host of FAIR's syndicated radio show CounterSpin. She contributes frequently to FAIR's magazine, Extra! and co-edited "The FAIR Reader: An Extra! Review of Press and Politics in the '90s" (2019).

Biden's Plan to Waive Vaccine Patents Is Good News, but Not Enough to Beat the Pandemic Within a Privatized Pharmaceutical System

Trans Kids Are People With Rights, Not Problems to Be Solved

Robert P. Alvarez
The Deep Work to Humanize the People Killed by Police
END_OF_DOCUMENT_TOKEN_TO_BE_REPLACED
Connect With Us

END_OF_DOCUMENT_TOKEN_TO_BE_REPLACED

What else would you expect these convulsive days. This weekend, a massive out-of-control Chinese rocket is hurtling back to Earth while much of the world wonders, with a mix of anxiety and sheesh-what-next resignation, just where it will land and if they'll be under it. Amidst the apocalyptic bingo card gags and forecasts - Partly cloudy with a chance of rocket - many have proposed, in the name of karma, the perfect, poetic landing site. Oh please.
Read More...
END_OF_DOCUMENT_TOKEN_TO_BE_REPLACED