SUBSCRIBE DONATE
Published on
Wednesday, March 04, 2020
by
Fairness and Accuracy In Reporting (FAIR)

Do Media Really Care About Money in Politics?

All that soft money doesn’t go to the candidates—most of it goes directly toward ad buys, so it supports the salaries of people like Maddow and Bolduan. They aren’t about to bite the hand that feeds them.

If media really cared, they would make some distinctions between the different kinds of money corrupting our elections, and their size and impact—context that’s been lacking in the “they all do it” coverage of the issue. (Photo: The Intercept) 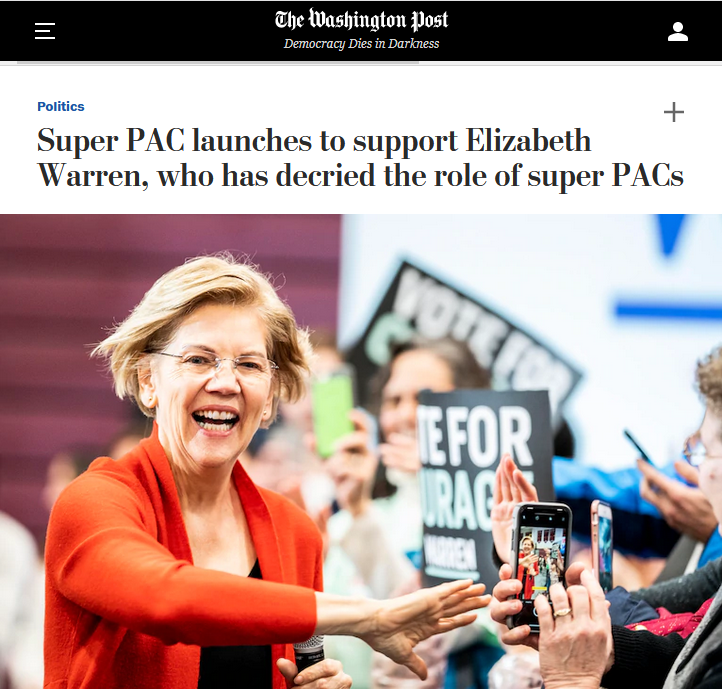 And indeed, it was a remarkable reversal for a candidate who has largely staked her campaign on her commitment to rooting out money and corruption in politics. As she said when she launched her campaign (Twitter, 2/9/19):

Let’s be clear: I won’t take a dime of PAC money in this campaign. I won’t take a single check from a federal lobbyist, or billionaires who want to run a Super PAC on my behalf. And I challenge every other candidate who asks for your vote in this primary to do the same.

But a deeper look at media coverage suggests that media’s concern with money in politics rarely extends beyond the catchy headline. Indeed, when Joe Biden reversed his own anti-Super PAC stance earlier in the race, coverage also called out his past vows to swear off Super PAC money, and included criticisms from opponents and from groups like End Citizens United (e.g., New York Times, 10/24/19). And yet after that initial blip, coverage fizzled, and he was asked not a single question about it in any of the debates.

This time around, even with the trenchant headlines and blistering quotes from supporters of Warren’s opponents, coverage of Warren’s Super PAC tends to peter out into shrugs of “they all do it.” The Washington Post‘s Michelle Ye Hee Lee (2/19/20) reported:

With the two new super PACs, every candidate who will be on the debate stage in Las Vegas on Wednesday is either a billionaire (former Mayor Michael R. Bloomberg of New York) or supported by super PACs that are not subject to campaign contribution limits (former Vice President Joseph R. Biden Jr., former Mayor Pete Buttigieg of South Bend, Ind., and Senator Bernie Sanders of Vermont). Tom Steyer, another billionaire, is competing aggressively in Nevada but did not qualify for this debate.

All of the Democratic candidates except for the billionaires—who have outspent their rivals with enormous sums of their personal wealth—have had help from outside groups.

But of course it’s disingenuous to suggest that all outside groups are essentially the same. If media really cared, they would make some distinctions between the different kinds of money corrupting our elections, and their size and impact—context that’s been lacking in the “they all do it” coverage of the issue.

In the Democratic race, there are Super PACs, which can accept unlimited donations from deep-pocketed individuals or groups to spend in support of a candidate as long as the Super PAC doesn’t coordinate directly with the candidate’s campaign. Then there are so-called “dark money” groups, which also can’t coordinate with campaigns, but unlike Super PACs, they don’t have to disclose their donors, and they can’t make political activity their primary function (though what constitutes political activity gets a little fuzzy).

In the wake of Citizens United, dark money spending—primarily by Republican groups—jumped to $300 million in the 2012 election, and Super PAC spending exceeded $600 million. In the 2018 midterms, $150 million in dark money was spent, with Democratic groups outspending Republicans for the first time; that year, Super PACs spent over $800 million, with Republican groups leading the way. Meanwhile, Michael Bloomberg has spent almost $500 million of his own money on his 2020 campaign, dwarfing all of the other candidates’ Super PAC or dark money. 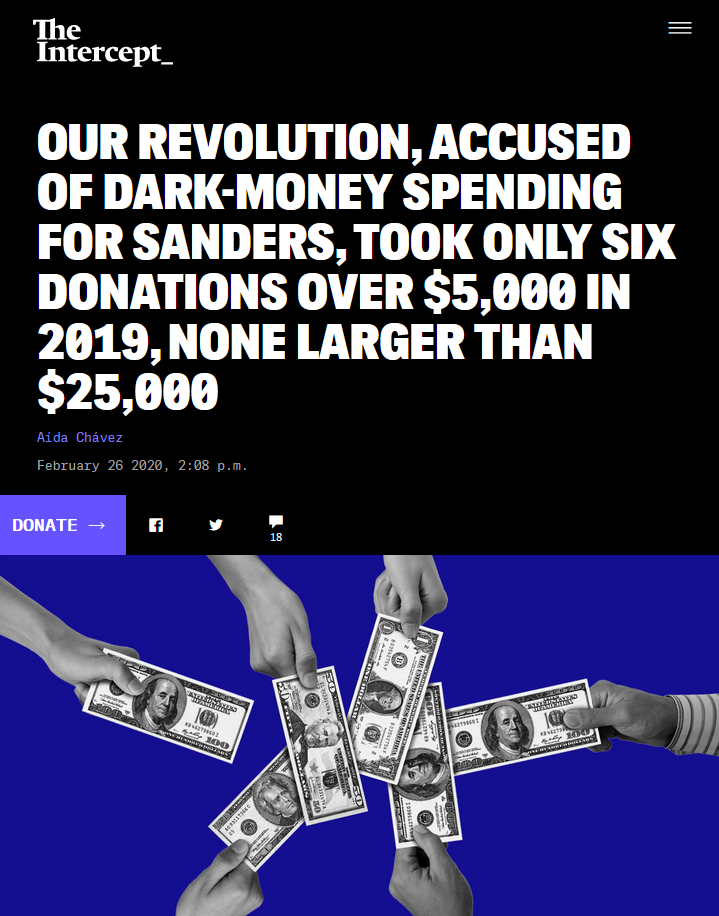 Our Revolution is not unproblematic; there are parts of the McCain/Feingold finance law that it appears to violate, most notably provisions about a federal office holder or candidate’s role in a 501(c) organization (e.g., “whether a sponsor, directly or through its agent, had an active or significant role in the formation of the entity”). Yet there is clearly a distinction between a group overwhelmingly funded by $20 donations and one exclusively funded by donations larger than this country’s median income.

But the brief flashes of media opprobrium about money in politics rarely draw such distinctions. Our Revolution, Unite Our Country, Persist PAC, Bloomberg’s deep pockets: They’re all the same—and none of them are worth sustained scrutiny.

If most in the media really cared, they’d also gin up much more outrage about the fact that the enforcement mechanism for campaign finance laws is currently nonexistent. The FEC, which enforces campaign finance laws, is incapable of acting on any complaints because it lacks a quorum—and Trump hasn’t nominated new commissioners for months now (Center for Public Integrity, 1/13/20). Which means that even the weak campaign finance regulations that do exist are easily flouted by donors and Super PACs. That’s been mentioned exactly once on commercial cable or network news in the last six months (MSNBC‘s The Beat, 9/23/19; it also got a report on the PBS NewsHour—9/12/19).

You do, however, get coverage like the “exclusive” interview Rachel Maddow (MSNBC, 2/24/20) touted with Guy Cecil, the head of Priorities USA, the largest Democratic Party Super PAC. Maddow introduced the segment like a breathless Super PAC fangirl:

Maddow then gave the Super PAC free air time by playing in full the two ads it was launching in battleground states, followed by her interview with Cecil, to whom she tossed softball questions like, “How do you see your work fitting into the overall Democratic project of beating President Trump?”

Cecil appeared the same day on CNN (2/24/20), where he was pressed by anchor Kate Bolduan, “Do you think folks need to start dropping out and, quote/unquote, ‘uniting the party’?” The same week, MSNBC (2/28/20) brought on Biden Super PAC advisor Amanda Loveday to serve as a Biden spokesperson.

Then again, why shouldn’t cable networks fawn over Super PACs? All that soft money doesn’t go to the candidates—most of it goes directly toward ad buys, so it supports the salaries of people like Maddow and Bolduan. They aren’t about to bite the hand that feeds them.

END_OF_DOCUMENT_TOKEN_TO_BE_REPLACED

Finally. After 20,000 lies and 174 years in office, a journalist spoke truth to mendacious power during its daily hate speech. “Do you regret at all, all the lying you’ve done to the American people?” asked S.V. Dáte of the guy who'll be known as "the impeached president who made up the most stuff...pretty much every day." To end it, we "will have to decide that lying is unacceptable in our governance" - and with Dáte probably disappeared, gulag-like, his colleagues will have to grow a spine.
Read More...
END_OF_DOCUMENT_TOKEN_TO_BE_REPLACED