For These Children of Iraq, Help Did Not Arrive

The unseen cost of three decades of war in Iraq

In the end, help did not arrive.

In 2001, a 10-year old boy sketched this image of his sister, Faiza Amir, in her sick-bed at what is now Children’s Welfare Teaching Hospital (CWTH) in Medical City Baghdad and then, in large letters above the drawing, he made his plea, in English: "Help Cheldrin (sic) in Iraq." Nearly all the drawings had written messages asking for help. Many asked for God's help. 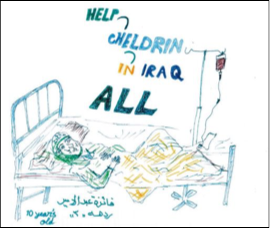 Muhanad Shawki directed his plea to a genie floating from a magic lantern: "I want to get out of  the hospital," he wrote on his perfectly rendered Disney-esque drawing of Aladdin. 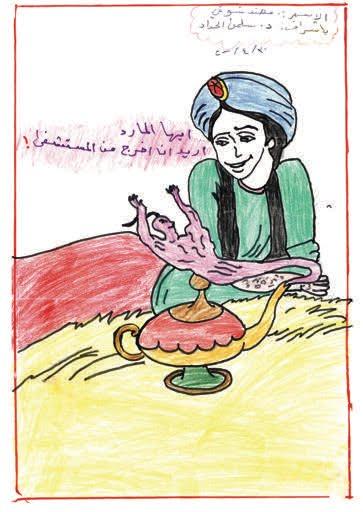 The message was the drawing by 8-year-old Heerum Ali, terminally ill with Non-Hodgkin's lymphoma. Arabic script in bright orange crayon fills the paper : "I don't want presents, I want to live." 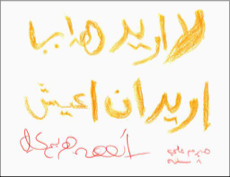 But help did not arrive. Not for Faiza, or Muhanad or Heerum; all three children died from childhood cancer.

Faiza died from ALL (acute lymphoblastic leukemia) only days after her brother gave me his drawing as part of the Iraqi Children’s Art Exchange. Muhanad and Heerum relapsed after their treatment and also died. Help did not arrive for children and it did not arrive for the doctors and nurses who struggled to care for them without adequate facilities, drugs or adequately trained personnel in a country devastated by the First Gulf War and isolated from the international community by stringent UN-imposed economic sanctions backed by the U.S. government. Help did not arrive, and the humanitarian crisis continued to deepen.

And then, in March 2003—fifteen years ago this month—the U.S. and a few allies waged yet another brutal war, dealing a further blow to an already devastated country and people. Still, in the months following the invasion, there was some hope in this Baghdad hospital that the worst was over, that the tide would turn, and that Iraq and Iraq's healthcare system could begin to recover and rebuild.

Dr. Salma, the director of the pediatric oncology unit at CWTH traveled to Jordan in June 2003 for a meeting to discuss the status of children with cancer in Iraq, to strategize and develop a plan of action with the international community. The statistics were terrible. The Under 5 Mortality Rate (U5MR) had tripled in the decade 1990-2000. More than a 500,000 Iraqi children had already died, a fact confirmed by then Secretary of State Madeleine Albright in her now infamous 60 Minutes interview with Leslie Stahl in 1998.

Everyone agreed children's overall health had declined significantly. However, they needed more information and they needed more data. They proposed an international medical team should go to Iraq to conduct a comprehensive, nation-wide health assessment of children which would help determine the needs and where and what resources would be required. "But," she told me, "nobody came because of security concerns. Nobody came." That was in 2003.

I was in Baghdad in January of this year, visiting on the pediatric oncology unit at CWTH, the unit where the Iraqi Children’s Art Exchange began in 2001. But help has still not arrived. Aside from a dedicated group in Japan and telemedical-collaboration from an Italian NGO working with a hospital in Rome for a few years, help has not arrived for children with cancer in Iraq. To this day, no one has been willing to come.

This is the unseen cost of three decades of war in Iraq. The health care system is in ruins as are health care facilities. Doctors, especially in a highly specialized field such as oncology, need help after years of isolation created by UN Sanctions, war and violence. They need help from the global health community and from global cancer organizations concerned about the "cancer divide."

Iraq, once the gold-standard of medical education and care in the Middle East now finds itself on the wrong side of this divide without adequately trained doctors and nurses. And no one is offering to help.

Claudia Lefko, a long-time educator, activist and advocate for children, is the founding director of The Iraqi Children's Art Exchange and its project, Baghdad Resolve: An International Collaboration to Improve Cancer Care in Iraq.

Elise Gould
As Economic Bounceback Deflates, Lawmakers Must Act Now to Reinstate the $600 Unemployment Boost
END_OF_DOCUMENT_TOKEN_TO_BE_REPLACED
Connect With Us

END_OF_DOCUMENT_TOKEN_TO_BE_REPLACED

The Interests of the Nation

It was 46 years ago that Richard Nixon resigned the presidency for crimes that so quaintly, ludicrously pale before Don the Con's that today, amidst the apocalypse, the war-mongering, burglary-bungling, I-am-not-a-crook loser we all thought represented the greasy bottom of the political barrel almost looks like a goddamn saint. In his resignation speech, Nixon said he hoped his act would hasten "that process of healing which is so desperately needed in America." Sounds good. Just sayin'.
Read More...
END_OF_DOCUMENT_TOKEN_TO_BE_REPLACED