Alabama Saves The Day. But Not Much Else.

Just look at what it took to beat Republican Roy Moore, no ordinary rightwing barbarian—even for Alabama

Roy Moore was defeated in Alabama, but how loud should the celebrations be when political insanity still rules the day? (Photo: Jonathan Bachman/Reuters)

It’s an odd day when Democrats have Alabama to thank for their better fortune. Winning a U.S. senate seat in the state that gave Donald Trump a 62 percent victory margin, narrowing the Republican-Democratic split in the Senate to one and scoring a victory for minorities, women’s dignity and gay rights, in Alabama, is no small thing. I dusted off my old Alabama Greatest Hits CD this morning and listened to “My Home’s In Alabama” with freakish pride. But Democrats are overstating the victory.

Doug Jones should have won by 30 points. He won by one and a half percentage points, a difference of 21,000 votes out of 1.35 million cast in a state with 3.33 million registered voters. Moore won 42 of Alabama’s 68 counties, winning 17 of them with 70 percent of the vote or more. In two of them, he won with 80 percent or more. (That would be Blount and Winston counties, where whites make up 87 and 89 percent of the electorate.) Turnout was 40 percent, about right for an off-year election two weeks from Christmas. Calling it a harbinger of next year’s mid-terms is wishful at this point.

And look at what it took to beat a Republican. Moore is no ordinary barbarian, even for Alabama. Before you get to his teen-addled and mall-rat lechery there were the more civil scandals of his tenure posing as a judge but acting like Mullah Omar’s Christian doppelganger. This is the judge who defied several state and federal court rulings with his Ten Commandment displays and illegally used proceeds from films about the controversy to pay his legal expenses. He was twice removed from the bench for breaking the law, the second time for ordering Alabama’s equivalent of our clerks of court not to issue marriage licenses to same-sex couples.

He was–he is–not just a bigot, but a cliché of bigotry. Think of anything or anyone non-white, non-evangelical and you’re pretty much on his shit list, though Muslims, gays and transgender people get him particularly excited. He thinks homosexuality is an American export, like Boeing jets and George Lucas movies. His idea of women is stuck somewhere in the backwoods of Winston County, predators being predisposed misogynists. Of course he thought Barack Obama was an East African Muslim impostor. Still does. Confederate monuments are his civic centerfolds, Donald Trump and Vladimir Putin his post-Confederate heroes.

That was before the allegations of his pedophiliac interests. And until then, he was cruising to victory in his Senate race.

So that’s what it takes for a Democrat to defeat a Republican anymore. A Republican opponent’s racism, love of violence, hatred of anything not hetero, predatory pussy-grabbing and inability to tell the truth isn’t enough, as Trump triumphantly reminds us. The opponent must also have lusted after children. That crosses the line, if barely so, at least in an off-year election not too many days removed from the arrival of Baby Jesus. That’s a pretty damn low bar to clear for Republicans. It essentially adds up to this: Be breathing and keep your hands out of the knickers of kids and you should be fine. If you have any doubts, look to the White House as every Republican wiseguy’s North Star. 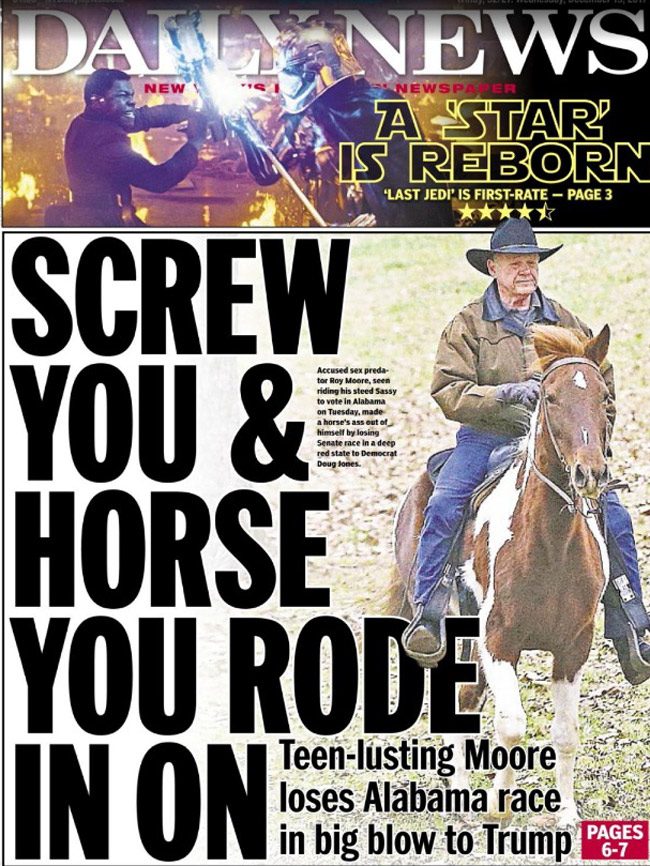 Not that Republicans should give up on pedophiles just yet. There were a couple of twists in this race that could have saved Moore’s candidacy. Trump miscalculated when he went ahead with another one of his white-man’s-burden rallies, that one in Pensacola a few days ago, not fooling anyone that it was a big ad for Moore smack in the middle of one of Alabama’s most important media markets. (Ron DeSantis, allegedly the congressman who represents Flagler County, lent his face and contralto voice to the pro-Moore orgy but managed not to mention the guy’s name. The appearance was message enough.) It was a shove too far. And Democrats, in a rare flash of strategic savvy–it reminded me of those parts of “Awakenings” when Robert DeNiro’s character comes out of his catatonic state for a while–managed to get Sen. Al Franken and his wandering hands booted off just in time to make it count against Moorland. Discount those two factors and we might have had a sequel to Charlottesville’s Unite the Right rally in the guise of Moore’s victory party.

His loss may also be Democrats’ bigger loss in the long run. In Jones they win an additional but still irrelevant seat in the Senate, where Republicans still control the majority. In not having Moore to kick around, they lose what would have been the most potent demolition charge under Trump’s rickety Republican Party in the run-up to the mid-terms. The fact that congressional Republicans are celebrating Moore’s loss at least as much as Democrats should tell you all you need to know.

Sanity won the day. It may even have won Alabama, that old cradle of civil rights and prophet of the occasional mockingbird song. Sanity is not winning elsewhere. Not by any measure.

Pierre Tristam is a journalist, writer, editor and lecturer. He is currently the editor and publisher of FlaglerLive.com, a non-profit news site in Florida. A native of Beirut, Lebanon, who became an American citizen in 1986, Pierre is one of the United States' only Arab Americans with a regular current affairs column in a mainstream, metropolitan newspaper. Reach him at: ptristam@gmail.com or follow him through twitter: @pierretristam

'We Can Shock the World': Kentucky Progressive Charles Booker Considers US Senate Run

'This Fight Is Far From Over': Amazon Union Vote Shows Exactly Why We Need the PRO Act

END_OF_DOCUMENT_TOKEN_TO_BE_REPLACED

It never ends. Even as another cop kills another black guy in Minneapolis, harrowing video shows yahoo unfit cops in Virginia pulling guns on, screaming at, pepper-spraying, kicking, handcuffing and threatening to execute Lieut. Caron Nazario, a black Latino member of the U.S. Army Medical Corps in his uniform for...NOTHING. "Why am I being treated like this?" Nazario keeps asking. Brutally simple: America, racism, "domination and humiliation of a black man" - again.
Read More...
END_OF_DOCUMENT_TOKEN_TO_BE_REPLACED