A Snow Day at the Department of Homeland Security

Back in November, the CODEPINK DC office hosted a movie screening about drone warfare on the side of Jeh Johnson’s elegant home in Georgetown. Jeh Johnson was chief counsel at the Department of Defense from 2009-2013 and wrote the legal memos that justified the targeted killing of people overseas by drones. He had just been nominated to head the Department of Homeland Security (DHS) and we decided to do a creative protest at this house because we didn’t think that one of the architects of the US drone program—a program that kills so many innocents and makes us so hated around the world—should be put in charge of  “homeland security”.

So we invited our friends, and the press, to join us for the movie night. We brought a popcorn machine, set up chairs on the sidewalk across the road from his house, and rigged the projector up to a car battery. Even the neighbors came out with glasses of wine to join us as we watched footage of almost life-sized killer drones projected onto the side of his house and villagers talking about how the drones terrorized their communities and killed their loved ones.

When the documentary ended, to our surprise, Johnson himself came out to talk to us. After an intense discussion about the ethics and efficacy of drone warfare, he invited us for a followup meeting once he was confirmed at the DHS.

That meeting was scheduled for Monday, March 17, 2014. It had snowed the night before, and the federal government was shut down. We thought that the meeting might be cancelled, but Secretary Johnson’s scheduler informed us that even though most employees wouldn’t be there, the meeting was still on.

We had been told beforehand that we could bring a total of 5 people, so in addition to Alli McCracken, Medea Benjamin, and Tighe Barry of the CODEPINK staff, we had invited two colleagues from the immigrant rights community since DHS is responsible for the unprecedented number of deportations (an astounding 1,100 people a day) occurring every day under President Obama, dubbed the “Deporter-in-Chief”. Our colleagues were Catalina Nieto of Detention Watch Network and Roxana Bendezú of School of the Americas Watch.

All five of us had filled out the required security forms days in advance. We braved the snow and drove out to the DHS headquarters in Northwest DC, following an elaborate treasure-hunt-type map once we got inside the DHS compound, in case we lost our security escort Don. Don was a nice guy who drove a silver pickup truck about 5 miles an hour just ahead of us from checkpoint to checkpoint.

To our amazement, while we had to show our IDs, no one ever searched us. No metal detectors, no looking through our bags—nothing. We parked in an empty parking lot and when we got inside, the place was practically deserted, with most folks home for the snow day. We couldn’t help but feel like we were in some sort of Trojan horse inside the walls of the fortress. Why would Secretary Jeh Johnson agree to have a meeting with CODEPINK (…possibly because we told him if he didn’t, we would show up at his house again)? 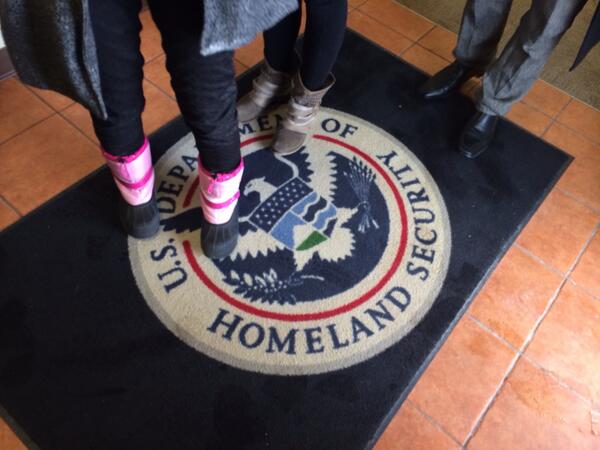 We were shuffled into a conference room, where we waited for our meeting to begin and chatted with a member of the Secretary’s staff. When asked if there was anything we would like, Medea asked if we could get tea or coffee. With a serious and somewhat sad face, the staffer told us they couldn’t provide tea to guests because of budget cuts! We laughed at the absurdity of a $60-billion-dollar institution not being able to afford 30-cent Lipton tea bags for guests.

But our laughter was cut short when a large, disgruntled-looking employee–– Christian Marone, who turned out to be Johnson’s Chief of Staff–– stormed into the room and announced that the Secretary would only meet with Alli. Flabbergasted, we protested, pointing out that we had all been invited to the meeting and our names had all been cleared by security. After much back and forth and a threefold increase in security guards, Marone angrily offered us an ultimatum: the Secretary meets with Alli down the hall in his office, or no one. We asked him to leave the room so we could discuss our options.

We decided not to accept their offer of meeting with just Alli—it was all or nothing. Just as we starting hatching plans for a sit-in, Marone came back in the room and hastily told us that Secretary Johnson was on his way. We figure the room must have been bugged, and that they definitely didn’t want to deal with a CODEPINK protest inside DHS on an understaffed snow day!

Johnson and a young assistant rushed into the room. Johnson looked at Medea and asked, “Alli??” …We were off to a good start.

He told us he had agreed to meet because he had seen CODEPINK “express our views in a variety of creative ways”–from his home to Congressional hearings to Medea’s disruption of President Obama’s speech in May of 2013. He said he believes in open dialogue and thought it would be good to hear us out.

We spent the next 40 minutes talking about our concerns. Alli opened the meeting by telling the Secretary that the drone program that he legally sanctioned continues to kill innocent people abroad, including the targeting of a wedding party in Yemen in December. She told him about CODEPINK trips to Pakistan and Yemen, where we’ve met with innocent drone strike survivors who have related their harrowing stories and pointed out that there has yet to be any apology or compensation for the victims.

Tighe and Medea talked about the domestic use of drones. They asked why DHS is giving grants to police departments across the country to buy drones when there aren’t any regulations in place for their use and why drones along the border are being illegally lent to law enforcement agencies. They expressed the concern of civil liberties’ groups throughout the country about the invasion of our privacy that will come when our airspace is totally opened up to drones in the next year or two, and how DHS seems to be working with the drone industry to help them increase sales. Medea gave him a copy of her book Drone Warfare, which he asked her to autograph.

Then we moved into the immigration issues, with Catalina giving a moving testimony about the struggles of life in America as an undocumented person. “I’m an ‘illegal alien,’ that’s how you refer to us in all your documents, right?” she asked him. “Well you are meeting one in person right now. Have you met with people going through detention and deportation? Have you met with the families of those who are being deported? You talk about conducting a review to make immigration enforcement more ‘humane,’ but let me tell you that there is nothing humane about enforcement, even from the way you refer to us, as aliens, not even humans. There is nothing humane about drones at the border, a border patrol that is out of control, or operation streamline. There is nothing humane about putting someone in deportation proceedings, then locking them up in a cage, away from their families and any support system, making it almost impossible to get legal counsel, without any due process rights, in horrible conditions, and then deporting them. There is nothing humane about that.”

She went on to suggest specific detention centers that the Secretary should visit to see the horrid conditions that people are kept in. When asked if DHS is lobbied by special interest groups like GEO, one of the largest private companies running detention centers for ICE (Immigration and Customs Enforcement under the DHS), he acted like he didn’t know what GEO was.

Roxana gave him several reports that outlined specific recommendations to improve immigration policy. She quoted Martin Luther King and even quoted Jeh Johnson himself quoting Martin Luther King, and pleaded that he see immigrants as real people and feel their humanity. She asked if the Secretary had any friends who were undocumented. “Probably,” he shrugged, “and I just might not know it.”

We appreciate that the Secretary heard us out and took the time to meet. However, he’s mistaken if he thinks that chatting with us for 40 minutes is going to make us forget about drone victims and the horrible treatment of the immigrant community. On the contrary. We’ve already signed up for the Women’s Fast for Families on April 7-9, part of a month of actions and fasting to demand fair immigration reform and we’re eager to participate in the April Days of Action to End Drone Killing, Drone Surveillance and Global Militarization. Join us in actions like these that will make our homeland more humane, peaceful and secure.

Alli McCracken is a National Coordinator with CODEPINK based in Washington DC.

Vigil for Peace in Yemen, a New Norm

Taylor Griggs
Can You Afford to Breathe in the Pacific Northwest?

Joan Pedro-Carañana
Yes, There Is Hope
END_OF_DOCUMENT_TOKEN_TO_BE_REPLACED
Connect With Us

END_OF_DOCUMENT_TOKEN_TO_BE_REPLACED

The Times confirms what cognizant bipeds suspected: The impeached president is a tawdry "one-man walking Ponzi scheme," a crook, tax cheat, con man and money-laundering "serial bankruptcy artist" who only played a billionaire on TV but was in fact a small, venal, inept emperor with no clothes or hair - though he spent $70,000 to get some - and a $1.1 billion debt. The sordid truth: "He's broke, he lives in our house and he's been stealing from us" - an " avatar for the age of plutocracy. "
Read More...
END_OF_DOCUMENT_TOKEN_TO_BE_REPLACED